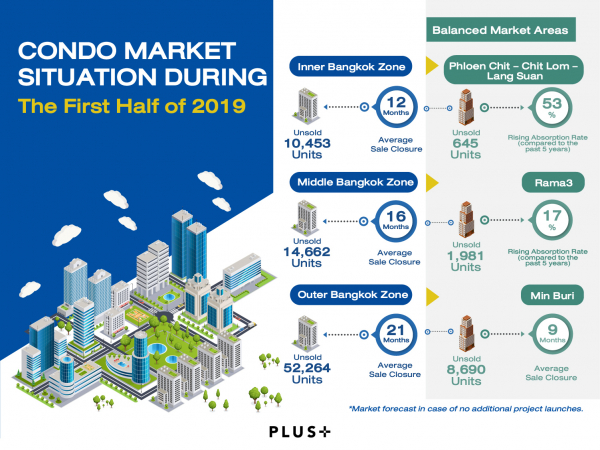 Sansiri Plc’s property agency arm Plus Property sees continued momentum for properties in the Phloenchit-Chitlom-Lang Suan central business district, where the absorption rate had risen by 53 per cent compared to the past 5 years.

The absorption rate in and around Rama 3, meanwhile, was about 5 units per project per month and Minburi in Outer Bangkok zone has earned a 'safe' label with remaining units expected to be sold within 9 months – faster than the average rate. These areas were still seeing healthy demand growth and balanced absorption of stock, and oversupplying was still limited to specific locations. At the same time, property developers were exercising caution when launching new projects, and have been adjusting their planning to better suit the economic condition.

The company’s deputy managing director, business strategies and asset management Suwannee Mahanarongchai said that the tightening of regulatory measures by the public sector and the constant monitoring of the real estate market by the Bank of Thailand have resulted in stringent loan approval criteria by commercial banks. This strictness meant that the percentage of non-performing loans over the past 5 years stood at about 3 per cent, which was not high.

“Our view is that there is very little chance of a bubble crisis occurring in the real estate sector, in a manner similar to that in 1997. Nonetheless, the current situation of real estate has given rise to concerns about oversupply at some locations. Certain localities have seen a continuously increasing number of project launches over the previous 4-5 years, and the number of unsold units in the market increased accordingly. Developers have tried to rebalance their investments by placing emphasis on selling and transferring ownerships at projects that were completed from late last year until the first quarter of this year. As a result, sales figures from these projects outperformed the average figure for the past 4-5 years,” said Suwannee.

Based on surveys of the condominium market in Greater Bangkok by Plus's research and development division, which took into consideration and made comparisons of data on demand, supply, time required to make sale, and the number of unsold units over the past 5 years, it was determined that only certain localities were experiencing oversupply.

For the Outer Bangkok zone, 52,264 units remained unsold. The units are expected to take 21 months to be sold off (assuming no additional project launches within this zone). Demand growth was found at the Min Buri area where 8,690 units remained unsold; these are expected to be sold off within 9 months – faster than the average rate for the Outer Bangkok zone.

“Developers have been analysing data and making tactical revisions to reduce running the risk of oversupplying in the condo market. It has been observed that, overall, supply was being balanced with demand, in the zones with new products injection. It is believed that the market will reach a balanced condition in the long-term if developers exercise caution by placing emphasis on releasing their old stock and take the care to evaluate the situation in order to properly determine the correct timing for new project launches. The government's recent relaxation of the LTV measure, by means of loosening the criterion for co-borrowing, should enable the property market to proceed into a brighter direction. The situation warrants monitoring and possible economic stimulus measures by the government in this latter half of the year must be watched for,” Suwannee said.