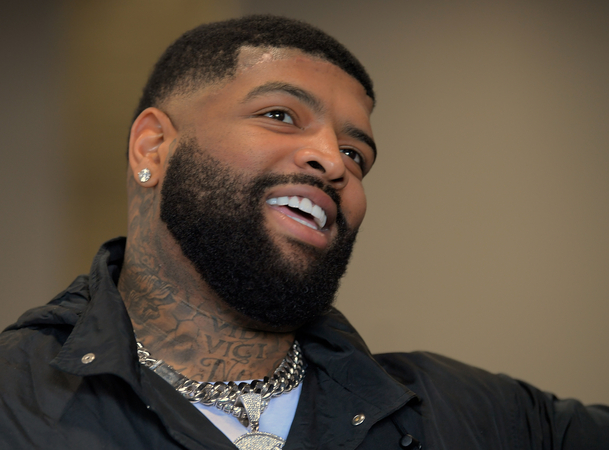 Offensive lineman Trent Williams refused to play for the Washington Redskins for the 2019 season. MUST CREDIT: Washington Post photo by John McDonnell

New Washington Redskins Coach Ron Rivera has reached out to star tackle Trent Williams and the two have been in contact, a person with knowledge of the situation said. The person also said Williams might visit the team's headquarters in Ashburn, Virginia, to meet Rivera.

Williams held out for all of last year's offseason activities and training camp as well as the first half of last season, after demanding a trade because he was unhappy with the way the team's medical staff handled a growth on his head that turned out to be cancerous. He returned to the club just minutes before the Oct. 29 trade deadline last year but was placed on the non-football injury list and said the team told him to not return to the facility.

When Rivera took over at the beginning of the year, he made clear that bringing back Williams - who has one year left on his contract - was a priority.

Rivera has indicated that getting Williams to return is a top priority. One of his first moves after being hired as Redskins coach was to hire respected trainer Ryan Vermillion - who had been Rivera's team trainer with the Carolina Panthers. At the time, a person familiar with the move said Vermillion's hire was with Williams in mind.

"One of Ron's top goals is to get Trent back," said the person, who spoke on the condition of anonymity to describe the team's thinking. "I know for certain that Ron is going to try to get him back."

Rivera, who began offseason planning meetings with the Redskins coaching and scouting staffs Monday, probably needs to know soon whether a Williams return is possible. The team needs to know whether it can count on having the seven-time Pro Bowl tackle back on the roster this season and whether it needs to draft a left tackle or find one in free agency.

Williams has one year remaining on a five-year $66 million contract, after which he will be eligible for unrestricted free agency. Washington would save $12.7 million in cap space if were to trade him, but it would be losing possibly the team's best player, at a premium position.

The NFL Network was the first to report that Rivera and Williams had been in contact.

Williams, 31, became frustrated with the Redskins last winter, when he was told that a growth he said the team's medical staff had ignored for years was actually a rare cancer called Dermatofibrosarcoma Protuberans, or DFSP. Though the cancer has a high survivability rate, he said the cancer was close to penetrating his skull and getting to his brain. He skipped offseason workouts before demanding a trade in early summer.

A standoff developed between Williams and then-president Bruce Allen, with Williams alleging that Allen refused to trade him out of spite. In a November interview, Williams said he came back to the team intending to play the second half of the season. He added that he was even looking forward to the arrival of a new helmet that was supposed to mitigate discomfort from the still-healing wounds from surgeries to remove the cancer and fix the skin on the top of his head. He said Allen had him placed on the non-football injury list Nov. 7 in a "vindictive" punishment for not only his holdout but for criticizing Allen and the team's medical staff in an Oct. 31 interview session with reporters.

"I don't see how it can be reconciled," Williams said in November, when asked whether his relationship with the team could be fixed. "At the end of the day, I'm a human being. I ain't like a dog and you can slap the s--- out of me and I'm going to come back the next morning with my tail wagging. This was a conscious decision; they didn't burn the bridge by accident. This was something they felt comfortable doing, so I got to feel comfortable with moving on, too."

Allen, who denied Williams's allegations at the time, was fired the day after the season ended, along with longtime trainer Larry Hess.

Before the cancer diagnosis, Williams and his agent had been talking about a contract extension with the team. And while those talks died during his holdout, some NFL team executives and player agents have speculated that Williams might consider coming back to the Redskins if he can get the security of a new contract.