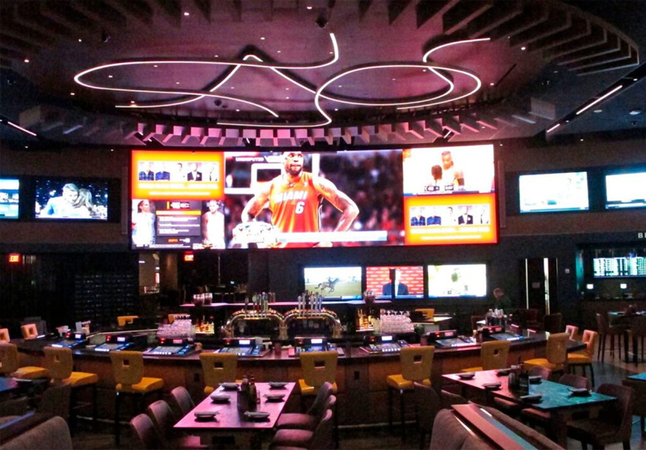 The headline-thirsty Costa Rican sports-betting website Bovada is known for splashy prop bets, including wagers on that scrambling black cat making a return appearance at a New York Giants game (+800) and Antonio Brown getting arrested in 2020 (+300).

So the company's latest gambit, which arrived in the inboxes of headline-thirsty sports reporters and editors this week, should come as little surprise: "No sports? Gamblers can now bet on the weather, for real."

Bovada can't survive on incoming cold fronts, but their newest prop perfectly underscores the question facing the global sports betting industry, including the fledgling legal markets in many U.S. states: Where will sports betters go with no sports? And how long can sportsbooks survive without them?

Even before Nevada Gov. Steve Sisolak ordered his state's casinos closed on Tuesday, physical and online sportsbooks were struggling to find bets to offer, with nearly every major event of the spring canceled or delayed as the world grapples with the spread of the novel coronavirus. At the U.K.-based betting house William Hill, employees have scoured the globe for potential action. "I told a couple of our IT guys to put on fencing suits and we could stream it," CEO Joe Asher said in an interview. "Obviously I'm kidding, but this is all we're doing: trying to find content for people to bet on."

William Hill did about 20 percent of its normal business last Saturday, Asher said. This week's losses will be even more painful, as it should bring March Madness, followed by the start of baseball, the Masters and high-stakes NBA basketball. Somewhere around four million Americans place legal bets on March Madness in sportsbooks and online, according to research from the American Gaming Association, sending billions of dollars through the regulated gambling industry and billions more through the black market.

"Cancellation of March Madness was a real punch in the gut in our industry," Asher said, adding that the first three days of the men's tournament often equal the amount bet on the Super Bowl. "Don't let anyone tell you we're close to replacing what we're losing. It's not dollar for dollar on darts to basketball. That's like the difference between the New York Yankees and Little League."

The wiping out of the sports calendar also comes after states, gambling operators, media companies and sports leagues have spent months racing into sports betting, in the wake of the 2018 Supreme Court ruling that allowed states to legalize it.

Dozens of states have passed laws and invested in sport-betting platforms that will now go largely dark. In January, Penn National, the casino operator, spent a reported $163 million to buy a large stake of Barstool Sports, the sports-media company, with dreams of opening Barstool-branded casinos. Its stock price surged after the purchase but has been pummeled in recent days, along with the rest of the industry. Gaming industry lobbyists are pushing Congress for bailout money.

Chris Grove, a partner at Eilers and Krejcik, a gambling research and consulting firm, said he doesn't expect states with new industries to close sportsbooks or betting apps, though some could face layoffs.

"Sector-wide in the U.S. you're probably looking at drop-offs in excess of 75 percent. But the U.S. market is in such an early stage, everyone is still more or less rolling out their sportsbook product," Grove said. "So this is a disruption of the rollout rather than an interruption of a mature industry.

"I think in states where they have online betting, you're seeing bettors go to their phones and see no sports happening and switching over to the casino games."

At least one sliver of the market says it's benefiting from the hit to traditional bookmakers. Companies like One Up and Players' Lounge allow users to wager on themselves in games like Madden, NBA 2K and FIFA, with the average entry fee per game hovering around $20 per game. They've seen a 40 percent spike in entries, both companies have said.

"Given this very serious crisis, we are a business that can fortunately see some benefit from people staying at home," said Players' Lounge CEO Austin Woolridge. "We're at this intersection of no sports to watch and nothing to bet on and it's an opportunity to engage in a new format for the first time."

But video game betting offerings can be intimidating to casual gamers, which makes for a higher barrier for entry than your typical NBA over/under.

"I don't know that there's an obvious substitute for sports betting," Grove said. "Some will find casino games, some will find games that have some element of sports, but it's not clear to me that there is a product that's relevant to enough sports bettors to soak up any material amount of that now unmet demand."

At the sports betting media company Action Network, head of content Chad Millman said he instructed his staff to focus on futures - how the Arizona Cardinals' trade for wide receiver DeAndre Hopkins impacts Super Bowl odds, for example - but also to pivot to other types of content, like politics.

"We're in a situation that creates an opportunity for the enforcement agencies for different markets for betting to maybe look at things," Millman said. "Political betting is done aggressively in Europe. Do different states start to create markets about betting on politics?"

It all depends on just how thirsty bettors and bookies get.

"I don't think we're going to get to a place, though, where we're betting on weather," Millman said.