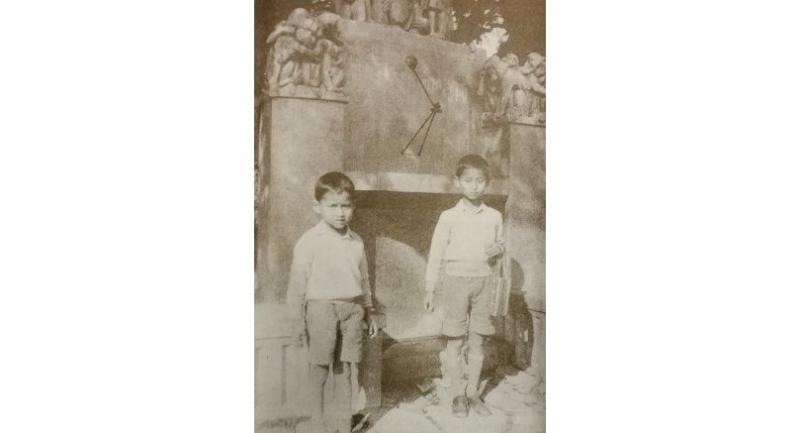 The royal brothers pose with monkey sculptures at a public park in Lausanne. The simian statues are still there.

WITH ITS stunning alpine landscape, Switzerland is a magnet for travellers from all over the world, but it holds a special place in the hearts of Thais because it was once home to His Majesty the beloved late King Bhumibol Adulyadej.

The late monarch, King Rama IX rarely left Thailand throughout the seven decades of his reign, but he spent his formative years, before ascending the throne, in Lausanne, one of the most picturesque of Swiss settings. One of the buildings at the Ecole Nouvelle de la Suisse Romande looks much the same as it did when King Rama VIII and his younger brother attended all those decades ago.

For Thais grieving his death last October, there is comfort in reading about his life, and even more in seeking out the places that played important roles in developing his character.

While Lausanne has in many ways changed over time, visiting Thais are delighted to find several buildings in almost exactly the same condition as they were during King Rama IX’s residence here.

One of them is the apartment building at 16 Avenue Tissot, where the future king and his family lived from 1933 to 1935.

He was still a boy, born in the United States just a few years earlier, in 1927. His London-born sister HRH Princess Galyani Vadhana was four years older. His brother HRH King Ananda Mahidol, born in Heidelberg, Germany, and hailed as King Rama VIII near the end of their stay on Avenue Tissot, was older than Bhumibol by two years.

I’d read about the family apartment in the book “Chaonai Lek Lek – Yuwakasat” (“Little Royals – Young Kings”) written by Her Royal Highness the late Princess Galyani Vadhana, so it was exciting to see it in person on my recent trip to Lausanne.

As described in the book, it sits in a quiet corner of the town, in a fine apartment block with “16” displayed prominently on one of the main doors. Since the building is entirely private property, unauthorised visitors are not allowed inside, but my imagination was ably assisted by the Princess’ memoir.

“Mum rented a flat on the first floor because she was worried her children might disturb the people living below with their running and jumping. Under our flat there was only the garage,” Galyani wrote, referring to her mother, who would become known as Her Royal Highness Sri Nagarindra the Princess Mother. Her Royal Highness Princess Sri Nagarindra and her three children lived in this apartment block in Lausanne from 1933 to 1935.

I noticed a large balcony at the rear of the apartment block. The Princess recalled that she and her brothers often spent time on their flat’s balcony when the weather was nice, and indeed her book has several photos of them out there. The pictures are black and white, so I wasn’t sure if the balcony railing was the same colour, green, as I saw during my visit.

I could see nothing and no one on this particular balcony, and it appeared that the doors of the flat leading onto the balcony were closed.

From the apartment, I could see Lake Geneva (or Lac Leman, as French-speakers call it) and I also discovered that it was only a short distance to Lausanne station.

Also close by is the Palais de Rumine, once a main building of the University of Lausanne, where the royal siblings studied when they grew older. The architecture is impressive, quite beautiful in the Florentine Renaissance style. It now houses a library of the university and several museums and is free to visit.

Out front is the St Francois Market where the Princess Mother used to buy fresh produce for her family. The market is open only on Wednesdays and Saturdays. The Palais de Rumine was once a main building of the University of Lausanne, where the royal siblings received their formal education.

My tour guide explained that the university had relocated some distance from the Palais de Rumine, to premises large enough to accommodate its growing number of students.

Inside I found a lot of young people pursuing their academic interests, but no clear trace of Thai royalty. That was to be found instead at the Ecole Nouvelle de la Suisse Romande, the school Ananda and Bhumibol attended beginning in 1935 – the year Ananda became King at age nine.

Two of the school’s original buildings, pictured in “Chaonai Lek Lek”, still stand. Inside one is a cabinet displaying many photos and other mementoes of the Thai royal family. A plaque honouring the two boys who became kings adorns the front of the school’s new building.

During my visit, Lysandre Seraidaris was on hand to share stories about the princes’ childhood. His father had been their private tutor, and King Bhumibol personally granted Seraidaris permission to write about their time in Switzerland, based on his father’s recollections.

Originally published in French, his book “King Bhumibol and the Thai Royal Family in Lausanne” has been translated into English as well as Thai. In Thailand, it became a bestseller.

Seraidaris has a formal presentation about “The King I Used to Know” that provides fascinating glimpses into the private lives of the royal family. He confirms that the siblings and their mother excelled at skiing, and Thais are familiar with photos of the family enjoying themselves on the slopes while on holiday.

Princess Galyani remembered in her book another happy occasion. She quotes a letter from her mother about her brothers’ visit to a Swiss chocolate factory, which they were interested to find largely automated. In fair weather the royal children loved spending time on the balcony just above the garage at their apartment building in Lausanne.

That was on April 15, 1935, at the invitation of Nestle, the chocolate maker with which the Cailler brand is affiliated. Thais travelling in Switzerland today make it a point to visit the factory, which offers a wonderful, multi-sensory presentation on the history of cacao.

Lausanne also has a vast park where the Princes and Princess played in their childhood. The boys had their picture taken with sculptures of monkeys there, and you can still see the carvings, looking exactly the same as they do in the royal family’s snapshots.

It was an undeniably joyful experience following “the royal trail”, but I had to agree with Kittiphong na Ranong, Thailand’s ambassador to Switzerland, who advised us to focus less on the physical places and more on what it was about the country that instilled in King Bhumibol such remarkable qualities.

“Swiss people are thinkers and inventors,” the ambassador said. “They usually do things by themselves and are fully dedicated to what they do.” And the brothers lived in Switzerland for 17 and 18 years, he pointed out.

He told visiting reporters, as an aside, that the Thai Embassy in Bern has a piano believed to be the first serious musical instrument with which the Princes became acquainted, when they were just nine and seven.

Kittiphong’s words resonate in King Bhumibol’s oft-quoted statement that he cared little about how history remembered him. “If they want to write about me in a good way,” he famously said, “they should write how I do things that are useful.”

So, as much I will always cherish the experience of exploring the royal trail in Switzerland, I recall more the late King’s boundless benevolence, and take to heart his teachings.

The writer travelled to Switzerland as a guest of Government Savings Bank.