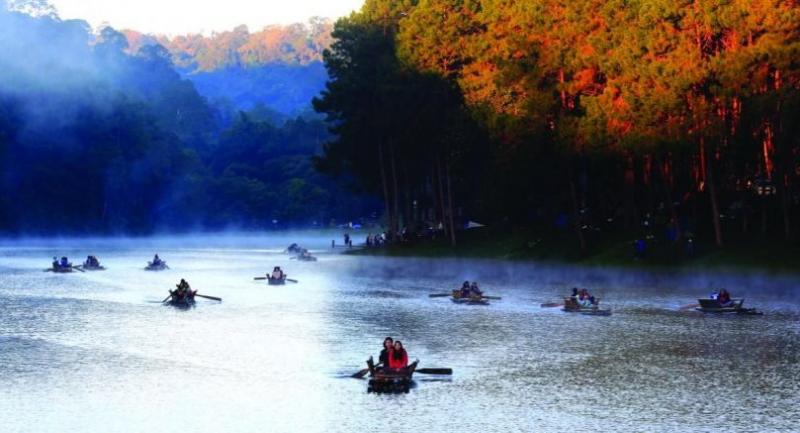 Mae Hong Son is one of 25 eco-cultural tours under the Once as a Tourist campaign.

AS 2018 COMES to an end, we take a look at what’s coming up for travel in 2019 and the best places to go to satisfy our inner ecologist

With many countries entering an ageing society and people increasingly focusing on their health, it comes as little surprise to see that more than 10 million tourists are now travelling to other countries to seek out the best treatments at an affordable price. According to Patients Beyond Borders, Thailand ranks among the top 10 medical tourism destinations, along with Singapore, South Korea, Taiwan, Turkey, Mexico, Israel, Costa Rica, India and Turkey.

“The Tourism Authority of Thailand (TAT) has conducted research into medical tourism and discovered that in 2016 Thailand welcomed more than 60,000 medical tourists from China, England, the United Arab Emirates, Singapore, India, Germany, Australia, Vietnam, America and Qatar. This year, the number has continued to increase,” says Thapanee Kiatphaibool, executive director of the TAT’s product promotion department. “Thailand is home to 64 hospitals accredited by Joint Commission International, which assures visitors safety and high-quality standards - this is the highest number in Asean and the fourth in the world.”

Thailand is best known for its regenerative and anti-ageing programmes, rehabilitation, in-vitro fertilisation (IVF) and wellness centres. In the coming year, TAT is promoting 12 cities including Bangkok, Khao Yai, Hua Hin, Khon Kaen and Udon Thani as top-class health destinations, where tourists can take advantage of quality treatments and enjoy a shopping experience, sight-seeing tour and great hospitality during their stays.

For those who wants to get back to basics and take a break from the stressful pace of urban life, the TAT and travel agencies Local Alike, KTC World, AirAsia, Journey D and Take Me Tour have tailored 25 “eco-cultural” tours as part of the new “Once as a Tourist” campaign.

Part of the “Amazing Thailand Unseal Local” project, it features 42 communities in 15 provinces to which visitors can enjoy a day trip or three-day homestays.

“Today’s younger travellers want to find new experiences, not just stay in a hotel, and the ‘Once as a Tourist’ campaign will meet that demand. It will be a channel that connects travellers with communities and give villagers a chance to promote their local wisdom and way of life, while travellers will have the opportunity to sample new things and get closer to nature,” says TAT governor Yuthasak Supasorn. Mae Hong Son is one of 25 eco-cultural tours under the Once as a Tourist campaign.

Designed to showcase its unique lifestyle, Baan Laem in Nakhon Si Thammarat has “Once as a Mud Man” that involves a cruise to Ao Thong Kham (Golden Bay) for a mud bath, a cooking class and a hike through a mangrove forest. Baan Nong San and Na Chueng in Sakon Nakhon have “Once as a Designer” with workshops on indigo dying techniques and traditional silk weaving, while for “Once as a Hill Tribe”, Baan To Phae in Mae Hong Son dresses guests in Tai Yai apparel, the better to explore the local history and have fun making handicrafts.

With Thailand now home to several Michelin-star restaurants, tourists will also be coming here to eat.

Jay Fai’s shop-house restaurant, which is famous for Thai-style crabmeat omelettes, has retained its Michelin star, remaining the only street venue in Thailand to earn this internationally recognised praise. Meanwhile the 60-year-old restaurant Methavalai Sorndaeng as well Le Du, Gaa, Canvas, R.Haan, Saawaan, Sorn, Ruean Panya and Suan Thip are among the 14 restaurants to have received their first star in the second edition of the “Little Red Book”.

This year, the Michelin Guide also covers some dining venues in other parts of the country including Nonthaburi, Pathum Thani, Nakhon Pathom, Samut Sakhon and Samut Prakan to Phuket and Phang Nga. Pru restaurant in Phuket is the only restaurant in region to have been awarded one star, while the “Bib Gourmand” award, a rating that recognises restaurants offering exceptionally good food at moderate prices, doubled in number this year from 35 to 72 venues.

Among them are the legendary Southern food restaurant Raya and its sister restaurant Chomchan in Phuket, along with Krua Bai Toey and Nai Mueng in Phang Nga.

Visa-free entry will continue to play an important role in drawing visitors next year. Japan has claimed the crown for top Asian holiday destinations according to this year’s booking data from Agoda and has capitalised on its no visa requirement policy for Thai tourists by adding flight routes to coax more visitors into enjoying everything from the ephemeral sights of cherry blossoms to quirky robot cafes.

Taiwan continues to gain in popularity thanks to its wealth of nature, history and culture and South Korea has stolen the heart of young travellers with K-pop music and drama series. Meanwhile, Hong Kong has turned some historical buildings like PMQ, the former police and court compound, into a creative art space called Tai Kwun for Hong Kong artists and designers to showcase their works.

Malaysia takes advantage of Air Asia’s direct flight to Kota Kinabalu, capital of Sabah State, where vacationers can enjoy striking views of verdant mountain ranges, massive farmlands and beautiful beaches and have fun with a wide range of outdoor activities. Japan is still the most popular holiday destination thanks to its diversity of culture, beautiful nature and illumination festivals. (Photo/EPA)

Based on over 163 million verified guest reviews and surveys of 21,500 travellers across 29 countries, Booking.com predicts that tech travel innovations will be much in demand.

In the coming year, those offering the technologies as practical solutions like keyless room-access with your phone, personalised travel tips or a robotic concierge who can communicate with guests in their mother tongue will be the winners.

“2019 is set to be an exciting year for travel. With technological advancements, an ever more connected world and a continuously growing consumer appetite for the best travel experiences, we’re poised for groundbreaking developments, taking travel to unexplored heights. With a mission to empower people to experience the world, Booking.com learns and innovates continuously and we’ve never been more excited to be at the epicentre of thrilling industry,” said Pepijn Rijvers, chief marketing officer at Booking.com.

He adds that the innovations won’t be the most futuristic or exotic, with travellers more enthusiastic about real-time luggage tracking through a mobile app and having a single app for all their planning, booking and travel needs than the prospect of using self-driving transportation in their destination.

2019 will also see more tech developed for use pre-trip at the research stage. Booking.com’s study shows that almost a third of global travellers like the idea of a “virtual travel agent” in their home, using voice-activated assistants to answer travel queries, and one in five want to see such technology as augmented reality helping to familiarise themselves with a destination before they arrive. In Singapore, Hotel Jen Orchardgateway and Tanglin Singapore are introducing a pair of robotic butlers called Jeno and Jena to deliver amenities and local favourites from the in-room dining menu to guests.

Designed and built by Savioke, the Relay robots can move unmanned around the hotel at a safe speed of 2.5 km per hour, half that of the average human walking speed. They can ride the elevators, make phone calls to rooms upon arrival, and are equipped with sensitive sensors that know to avoid obstacles in its path.

“The Relay robots, yet again proves that it can surprise and delight urban adventure-seekers,” said Cetin Sekercioglu, executive vice president of Shangri-La Hotels and Resorts.

Jeno and Jena are integrated with a software system that can easily track their to-do list once an order is placed and guests can expect one of the pair to have these delivered within 15 minutes from the time of request.

This is the first fully autonomous delivery robot that has been deployed in over 70 dynamic busy environments such as logistics, hotels, office buildings, and high rise apartments. Using advanced technology to navigate around people and objects, the Relay robots deliver items quickly, safely, and reliably.

The issue of single-use plastic will continue to be a hot topic, but in 2019 environmental concerns will turn into greater environmental action. Millennials and Gen Z travellers will look for sustainable experiences in their destination, while accommodation providers will be working to reduce their plastic usage and increase their sustainable credentials.

According to Booking.com, an overwhelming majority of global travellers say they would be willing to spend some time on activities that offset the environmental impact of their stay, with over a third willing to clear plastic and litter from a beach or other tourist attraction.

Representing a new type of currency and means of personal fulfilment, 2019 will see a focus on travellers making choices with extra significance as they look to add more purpose to their trips.

Over half of global travellers agree travelling has taught them invaluable life skills, and 2019 will see a rise in people’s desire to learn something new whilst away, as well as an increase in volunteering and skills-based vacations across generations.

In particular, Generation Z will increasingly scrutinise the value of expensive college degrees against the life skills and practical learning that can be gained from travel, especially as experiences beyond the classroom and office cubicle continue to make for attractive potential employees in many companies’ eyes.