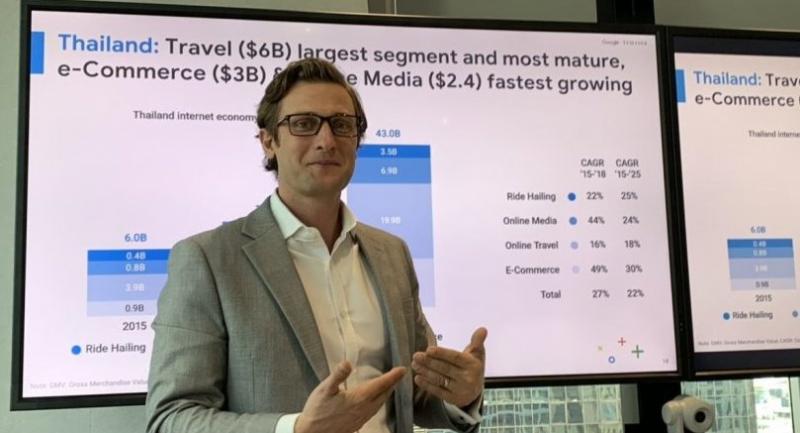 THAILAND’S Internet economy is expected to be worth US$43 billion in 2025, according to a study.

Thailand’s Internet economy currently contributed 2.7 per cent of national gross domestic product (GDP), lower than China and the US’ 6.5 per cent in 2016, which means there is huge opportunity to accelerate growth.

Ben King, country manger of Google Thailand, said that according to research, the key driver of Thailand’s Internet economy is e-commerce and online media.

Thailand’s e-commerce in 2018 is valued at $3 billion and gross merchant values on all e-commerce platforms is the second largest e-commerce market in SEA behind Indonesia with $12.2 billion.

Online media is the distinguished sector since it is growing rapidly. Online media, included advertising gaming, and music and video subscription, is now about $2.4 billion, growing at 44 per cent per annum. It is expected to touch $7 billion in 2025.

Last but not least, online travel is another big sector for the Internet economy. Thailand’s online travel market in 2018 was worth $6.1 billion in gross booking value, as the second largest in SEA behind Indonesia with $8.6 billion. It is expected to grow at 18 per cent per annum to reach $20 billion in 2025.

Meanwhile, the Internet economy directly created skilled jobs for 100,000 professionals in 2018 and is expected to create 200,000 jobs in 2025. It creates employment at 10 per cent compound annual growth rate.

Moreover, 2018 will be a record year for Internet economy fundraising in SEA. In the first half of this year alone, $9.1 billion were raised. In SEA, $24 billion has been raised since 2015.

Of the amount raised in the first half, around $6.5 billion went to SEA’s nine unicorns. Meanwhile, Grab has become the first decacorn, a company with valuation exceeding $10 billion, which is among less than 20 globally.

The report also projects that the pool of skilled Internet economy professionals needs to expand by 10 per cent in the region every year to support the growth of local business.

Governments need to invest in training their people with the right skills for the Internet economy so that businesses have a pool of local developers, computer scientists, online marketing professionals and data analysts to draw from.

“e-Conomy SEA 2018” is the third edition of e-Conomy SEA by Google and Temasek’s research on Southeast Asia’s Internet economy.