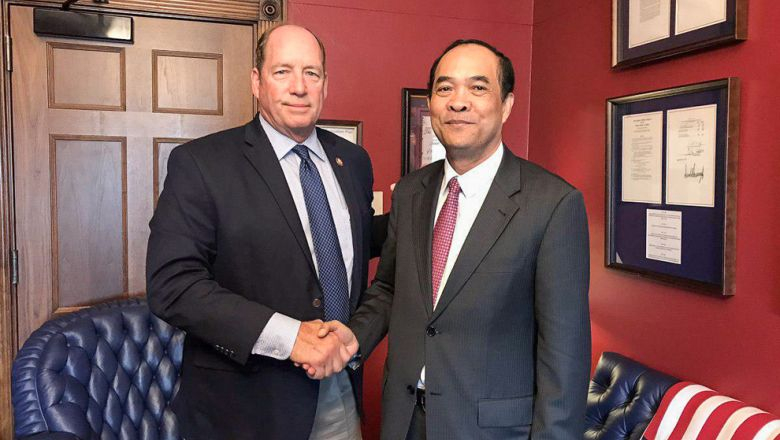 CHUM SOUNRY, CAMBODIAN AMBASSADOR THE US, RIGHT, MEETS REPUBLICAN REPRESENTATIVE TED YOHO ON MAY 17. Photo by the Phnom Penh Post

The US House of Representatives passed the “HR 526 Cambodia Democracy Act” on Monday, which once signed by the president, will see two key sets of action taken against high-ranking Cambodian officials seen as being responsible for undermining democracy and violating human rights in their country.

Introduced by Ted Yoho, Republican representative for Florida, on January 11, the act purportedly aims to “promote free and fair elections, political freedoms and human rights in Cambodia, and other purposes”.

The bill cited seven findings including “the undemocratic rule of Prime Minister Hun Sen, the enactment of the NGO law, restrictions on the media, the arrest of Kem Sokha and the dissolution of the CNRP [Cambodia National Rescue Party], six unfair and unfree elections since 1991 and non-genuine 2018 elections”.

It is still unclear who in the Cambodian government or military will be targeted if the bill becomes law. Once it is approved, President Donald Trump will have 180 days to take action against senior officials of the Cambodian government, military or security forces that he “determines has directly and substantially undermined democracy in Cambodia; or has committed or directed serious human rights violations associated with undermining democracy in Cambodia”.

Trump will also be able to apply sanctions on “entities owned or controlled by senior officials of the government, military or security forces of Cambodia”.

The bill lists two sanctions – asset blocking, which prohibits all transactions in property and interests in property if they are in the US, and visa sanctions restricting entry into the US.

“The ‘Cambodia Democracy Act’ expresses the very real concerns lawmakers in Washington have about eroding human rights and the weakening of democratic institutions in Cambodia,” US Embassy spokesperson Emily Zeeberg, told The Post via email on Tuesday.

She said the bill still required Senate approval before it can become law.

‘Against the political will’

Cambodian government spokesperson Phay Siphan said the news comes as a surprise and he is regretful that the US House of Representatives has passed the bill.

“I think the bill is political in nature and has the intention to go against the political will of Cambodians who legitimately elected their leaders through peaceful and democratic elections,” Siphan said.

He added that Cambodia cannot accept the bill because it is based on unfounded accusations and shows “political ambition” against the Cambodian government and people.

“The bill goes against the peace, stability and prosperity of Cambodia. In this context, I appeal to the US legislative and executive branches to think twice regarding their position on Cambodia in the interests of a good relationship and mutual interests of the people and governments of both countries,” Siphan stressed.

He said he expects the US Senate and president to focus on the good ties and cooperation the two nations have been fostering.

Political analyst Lao Mong Hay said should the bill become law, it would have far more dangerous consequences for the country and the targeted individuals than they could imagine.

“If fully implemented, it will suck Cambodia into the quagmire of the current Sino-US conflict. Cambodia was sucked into such quagmires in the 1970s and 1980s, and couldn’t get out of them as a sovereign and independent state until the Paris Peace Agreements [were signed in 1991].

“It would be wishful thinking to imagine that in the present day, a divided Cambodia would fare any better and get out of this new quagmire with its sovereignty and independence intact,” he said.