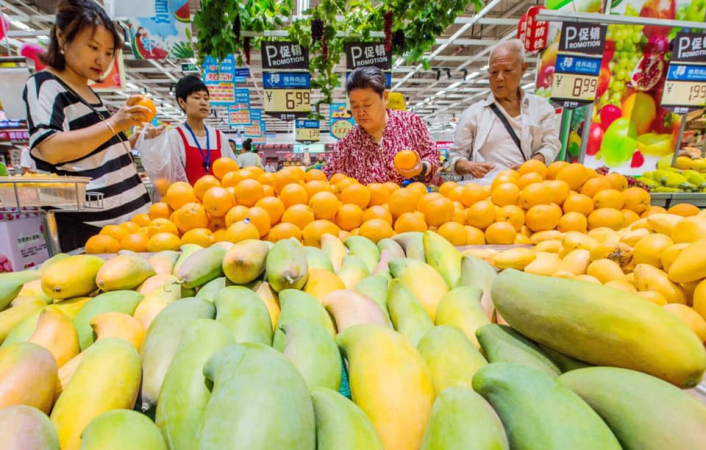 China’s consumption market is expected to remain stable and grow in the second half of the year, pushed by the country’s stable job market and tax-cut measures, as well as the new round of reforms and opening-up, the country’s Ministry of Commerce said in an online statement.

As a major driver of the national economy, China saw retail sales of consumer goods jump 8.4 per cent year on year to 19.5 trillion yuan (Bt87 trillion) in the first half of this year, a positive sign highlighting the country's rising spending power despite a complex global economic situation with increasing external uncertainties.

In addition to witnessing strong online sales between January and June, the ministry found that the growth in goods used for daily lives remained encouraging during the same period, as demand for daily necessities (14.1 per cent), Western and traditional Chinese medicines (10.9 per cent), grain and edible oil (10.4 per cent) and beverage products (9.9 per cent) surged year on year.

According to the statement, the head of the ministry’s Department of Market Operation and Consumption Promotion, as the next step, the government will continue to optimise the operational mechanism of its consumption system, speed up transformation of old urban residential areas and implement other policies to further stimulate the potential of domestic consumption, as well as create more jobs in both urban and rural areas.

Sun Fuquan, a researcher at the Chinese Academy of Science and Technology for Development in Beijing, said as China had officially given the green light for 5G commercial services in June, a new round of consumption demand will be stimulated in the second half of this year. Consumption of high-definition televisions, intelligent home appliances, virtual-reality and augmented-reality products will also see fast growth.

"The growth in these specific areas will not only occur in the home market, but also in global markets, especially those economies participating in the Belt and Road Initiative," he said.

As the business model and product content evolved, services rather than real items, have also become the new growth point targeted by both physical stores and e-commerce platforms, said Li Dongjin, a marketing professor at Tianjin-based Nankai University.

China experienced steady development of service consumption in the first half of the year, as the growth of the country's catering sector, educational and entertainment business, and healthcare industry rose 9.4 per cent, 10.9 per cent and 9.5 per cent, respectively, leading to service spending accounting for 49.4 per cent of the country's total domestic consumption, a 0.6 percentage point increase over the same period of the previous year.

To better support the preparatory work for the upcoming second China International Import Expo in Shanghai and understand the country's supply capacity and demand for major consumer goods in a timely and accurate manner, the Ministry of Commerce conducted a statistical survey of the country's retailers and consumers, on the supply and demand of 10 major categories of consumer goods, such as food and clothing, from March to May this year.

The survey found that the supply of consumer goods was mainly domestic, and the demand for imports was strong. About 79.6 per cent of consumers purchased imported consumer goods during the three-month period. Foreign cosmetics, jewellery, passenger vehicles, mother and child products, watches and glasses remained popular choices for Chinese shoppers.

About 24.1 per cent of consumers said they would increase their purchases of imported consumer goods in the second half of this year. They are now paying more attention to branding information, product safety and design in the process of selecting goods, according to the survey.