After repeated calls to protesters to leave were ignored, police were forced to fire tear gas in Sheung Wan on Sunday night to disperse violent demonstrators who responded by hurling missiles, including bricks and umbrellas, and lit fires on the roads. (PHOTO / CHINA DAILY)

Hong Kong was dealt another blow to its reputation as a city that’s run by the rule of law when radical protesters again resorted to violence on Sunday — clashing with police and besieging the liaison office, one of the central government’s key institutions in the special administrative region.

A peaceful march against the now-suspended extradition bill earlier in the day turned ugly when radical protesters marched to the Liaison Office of the Central People’s Government in the HKSAR in Sai Wan, Hong Kong Island, to vent their anger.

Wearing goggles and face masks, the demonstrators besieged the liaison office with metal barricades, daubed offensive graffiti on the complex’s walls and defaced the national emblem mounted at the building’s entrance with black liquid.

After learning that the police were about to mount a clearance operation at around 8 pm, the protesters fled east to Sheung Wan, and refused to leave despite repeated calls by the police.

Police were forced to act at about 9 pm, firing tear gas in a bid to disperse the hundreds of protesters who responded by hurling missiles, including bricks and umbrellas, and lit fires on the roads.

A China Daily cameraman captured some of violent heart-wrenching moments outside the liaison office and in Sheung Wan. 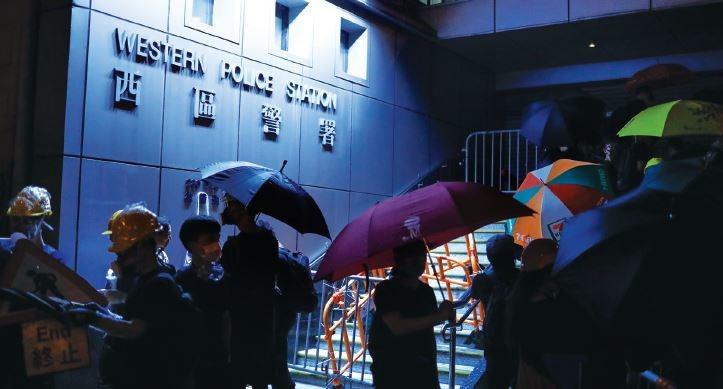 While besieging Western Police Station, protesters use umbrellas to block the CCTV cameras and spray graffiti on the wall with black paint. (PHOTO / CHINA DAILY)

Masked demonstrators pry bricks from a road near Western Police Station to use them as missiles in battling with the police. (PHOTO / CHINA DAILY)

Riot police mount a clearance operation outside the Liaison Office of the Central People’s Government in the HKSAR that had earlier been vandalized by protesters. (PHOTO / CHINA DAILY)