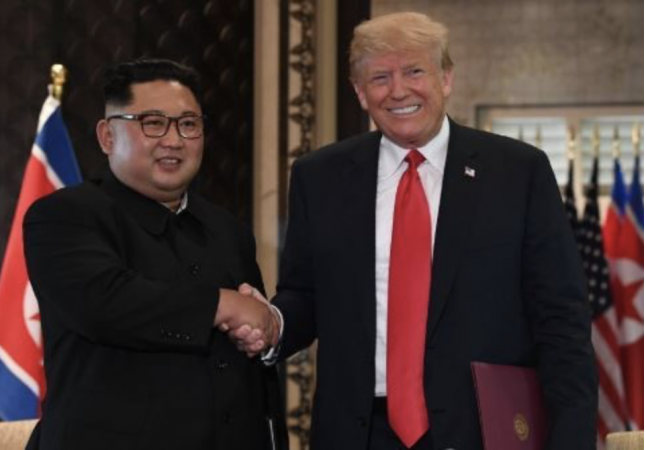 US President Donald Trump said Saturday that North Korean leader Kim Jong-un expressed his will to restart negotiations on its nuclear program with the United States "as soon as" the joint military exercise between Seoul and Washington is over.

The North Korean leader also pledged to stop missile launches when the combined exercise ends, according to the president.

"In a letter to me sent by Kim Jong-un, he stated, very nicely, that he would like to meet and start negotiations as soon as the joint US/South Korea joint exercise are over," Trump said on Twitter.

On Friday, the president told reporters that he had received another "very beautiful" letter from Kim the previous day, in which the leader expressed his displeasure with the allied exercises.

South Korea and the US are scheduled to stage their Combined Command Post Training over 10 days starting Sunday, following four days of "crisis management staff training" that began Monday.

Trump then tweeted that he looks forward to seeing Kim "in the not too distant future," noting that a nuclear-free North Korea will become "one of the most successful countries in the world."

During their surprise meeting in the inter-Korean border village of Panmunjom at the end of June, Trump and Kim agreed to resume their nuclear negotiations, which have been stalled since the no-deal Hanoi summit in Feb.

Despite Washington's proposal for working-level talks, however, North Korea has threatened to seek "a new way" if South Korea and the US go ahead with their combined military exercise and has intensified its display of weapons in recent weeks by test-firing newly developed short-range ballistic missiles.

Noting that it was "a long letter, much of it complaining about the ridiculous and expensive exercises," Trump said that it was also "a small apology for testing the short range missiles, and that this testing would stop when the exercises end."

In the latest test, North Korea fired two projectiles believed to be short-range ballistic missiles into the East Sea early Saturday, according to South Korea's Joint Chiefs of Staff.

Noting that those tests appear to be a show of force against the joint training and that there seems to be a high chance of additional launches, the military said it is closely monitoring the situation and maintains staunch readiness.

The allies have said their computer-based exercise aims to better prepare for the transfer of wartime operational control (OPCON) from Washington to Seoul and to enhance their military readiness, but the North has repeatedly demanded its immediate halt, calling it a rehearsal for invasion.

Speaking to the reporters on Friday, Trump said he has "never" liked the combined exercise either, and he reiterated that in the current phase of peace efforts North Korea has only conducted short-range missile tests and has not tested nuclear devices. (Yonhap)