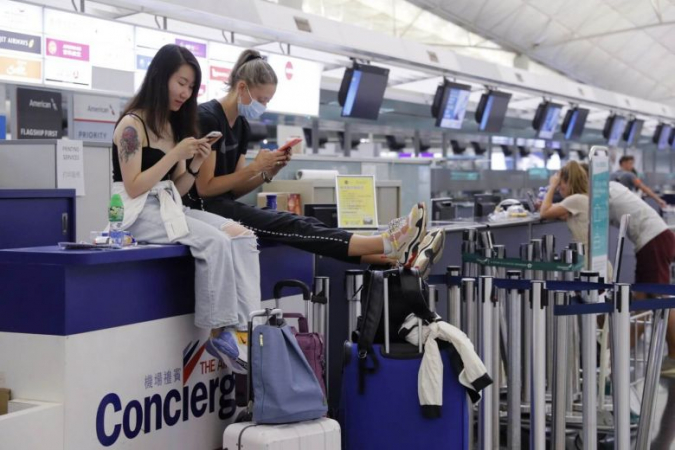 “We have resumed check-ins,” a spokesman for the airport told AFP. The flight status board at the departures hall showed several flights listed as "boarding soon" with new take-off times listed for others.

Passengers with luggage were being checked in for flights, and only a handful of the thousands of protesters who flooded into the airport a day earlier remained in the building.

Authorities announced on Monday afternoon the cancellation of all remaining arriving and departing flights from the airport after more than 5,000 black-clad pro-democracy protesters staged a peaceful rally at the building. Throughout the evening, protesters gradually left the airport, but there was no police operation to clear them by force.

Protesters have said they plan to return to the airport later in the day to resume their demonstrations.

The protests have infuriated Beijing, which described some of the violent demonstrations as “terrorism”.

Washington overnight urged all sides to refrain from violence, as the crisis sparked by a bill to allow extradition to mainland China continues with no apparent end in sight.

On Tuesday morning, only a handful of protesters remained in the airport. But fears of a police operation to clear the facility overnight proved unfounded, with demonstrators simply leaving by themselves.

Many of the posters and artwork they had hung throughout the facility during the hours-long rally had been taken down, but graffiti – some reading “an eye for an eye” – could still be seen in several places.

The protesters adopted the slogan after a woman suffered a serious facial injury that reportedly caused her to lose vision in one eye at a demonstration that turned violent on Sunday night.

The demonstrators accuse police of causing the injury by firing a bean-bag round, and cite the case as evidence of what they say has been an excessive and disproportionate response by police to their protests.

The activists have called on their supporters to return to the airport later on Tuesday, though it was unclear whether authorities would allow that to happen.

The protests that began in opposition to a bill allowing extradition to the mainland has morphed into a broader bid to reverse a slide of freedoms in the southern Chinese city.

But the city’s Beijing-backed leader has ruled out meeting the protesters’ demands, which include the right to choose their next leader and an investigation into alleged police brutality.

The demonstrations have become increasingly violent, with police using tear gas and rubber bullets to push back protesters who have sometimes hurled bricks and bottles.

“It is becoming more and more dangerous, but if we don’t still come out at this point, our future will become more frightening, and we will lose our freedoms,” a 22-year-old protester at the airport told AFP on Monday.