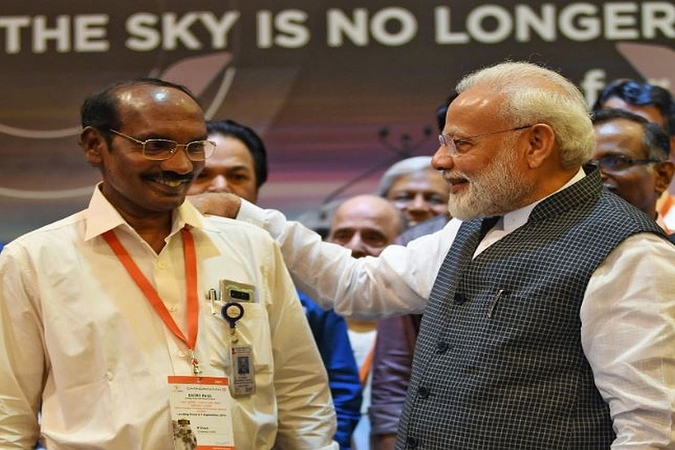 PM Modi, who met K Sivan at the ISRO Centre in Bengaluru, hugged and consoled the ISRO Chief after he broke down.

Hours after India suffered a setback as the Chandrayaan-2 lander, which was expected to make a “soft landing” on the Moon’s surface early on Saturday morning, lost communication with the ISRO, Prime Minister Narendra Modi addressed the scientists at the space agency in a bid to boost their morale.

PM Modi, who met K Sivan at the ISRO Centre in Bengaluru, hugged and consoled the ISRO Chief after he broke down.

Following the Rs 978-crore-rupees Chandrayaan-2 mission’s apparent temporary setback with the Vikram lander losing communication minutes before touching down on the lunar surface, PM Modi said, “Friends I could feel what you were going through a few hours back; your eyes were conveying a lot. You live for India’s honour, I salute you”.

He said the nation stands in solidarity with the scientists. “We are proud of our space program. Today our resolve to touch the moon has grown even stronger.”

“We will rise to the occasion and reach even newer heights of success,” the PM said and termed the ISRO scientists as “exceptional professionals who have made an incredible contribution to national progress”.

“In our illustrious history, we have faced moments that may have slowed us but they have never crushed our spirit. We have bounced back again and gone on to do spectacular things. This is the reason why our civilization stands tall,” Modi said in his address.

“Today I can proudly say that the effort was worth it and so was the journey. Our team worked hard, travelled far and these very teachings will remain with us. The learning from today will make us stronger and better,” he added.

“There will be a new dawn and a brighter tomorrow very soon. There is no failure in science, only experiments and efforts,” he said.

In a major setback for the Indian Space Research Organisation (ISRO), communications between the moon lander Vikram and the orbiter got snapped as the former was only 2.1 km away from its designated landing spot on the moon’s South Pole early on Saturday, throwing suspense over the fate of Rs 978 crore Chandrayaan-2 mission.

The lander, Vikram was supposed to land on the moon’s surface at 1:55 am following what ISRO had described as “15 minutes of terror”.

Patting Sivan’s back after the announcement, the Prime Minister said: “Whatever you all have done today is no mean feat. I am with you. Be courageous.”

Meanwhile, the 2,379 kg Chandrayaan-2 orbiter continues to fly around the moon. Its mission life is one year.

While an ISRO scientist said it was possible that the communications got snapped as the lander crash-landed, after losing control when its thrusters were switched off during its descent, another said that all is not lost as far as the mission is concerned.

Chandrayaan-2, India’s second moon mission spacecraft, had lifted off successfully onboard the “Bahubali” rocket from Satish Dhawan Space Centre in Sriharikota in Nellore district of Andhra Pradesh on July 22.