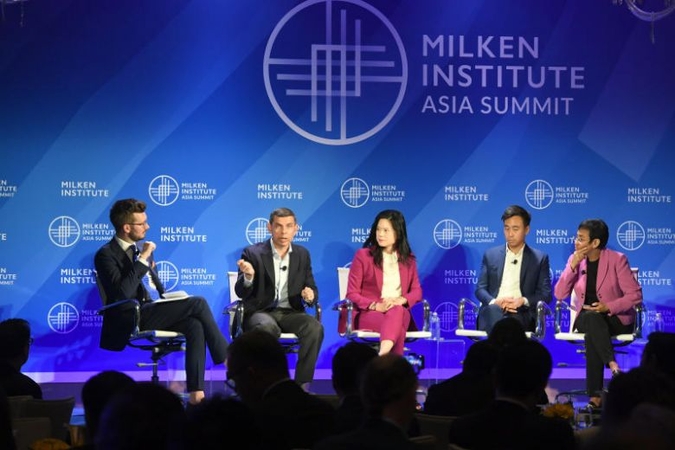 By Fabian Koh
The Straits Times/ANN

SINGAPORE - The rise of fake news is an existential moment for journalism, and there needs to be a combined global effort to combat it.

Such a move is crucial, especially with the rise of tech platforms which have accelerated the spread of falsehoods online, media leaders said on Thursday (Sept 19).

They were speaking during a panel discussion on fighting fake news at the annual Milken Institute Asia Summit held at the Four Seasons Hotel and attended by global leaders in government, business and media.

Ms Maria Ressa, chief executive officer and executive editor of Philippine news portal Rappler and a journalist of over 30 years, said: "At no other point in time have we faced a crisis like this. This is an existential moment."

She noted how big-data firm Cambridge Analytica had experimented with peddling disinformation on Facebook in the Philippines during its 2016 election and affected the integrity of the poll.

The four-member panel explained how fake news targets opinions at the extremes to garner higher viewership.

Ms Ressa said this is the same in "every part of the world", where facts are replaced with disinformation and alternate realities, which people tend to believe.

"If you say something a million times, it can replace a fact," she said.

Ms Ellana Lee, senior vice-president and managing editor for Asia Pacific at CNN International, said there had to be a clear definition on what constitutes fake news.

"When it comes to the President of the United States, he uses 'fake news' as any news or information he does not agree with," she said.

The Straits Times editor Warren Fernandez, part of the panel of four, said the rise of fake news can be a bane as well as a boon for media outlets.

"With so much fake news out there, our audience is saying to us 'we need help to figure this out'," he said.

He shared how on Thursday morning, a video allegedly showing birds falling out of the sky in Indonesia due to the haze went viral, and readers wondered if it was real. He said the paper is trying to verify it.

"It is both a boon and a bane in the sense that because there is so much fake news, there is a shift towards more credible voices, and that's where professional media groups have a role to play," said Mr Fernandez, who is also editor-in-chief of Singapore Press Holdings' English/Malay/Tamil Media Group.

He added that it is down to news outlets to get the truth out in a "credible and responsible way" so as to address the concerns that members of the public have.

Mr Fernandez added that with new technology that can produce say, deep fake videos, it will become very difficult to figure out the fake from the real.

He, however, is optimistic the younger generation is "a lot more sceptical", having grown up in an environment of fake news. He noted those with the greatest propensity to share fake news tend to be those who are older. They grew up in an era when there was greater trust, he noted, saying: "When they see something coming to them on their phone or WhatsApp, they think 'I better alert my friend' and they share it."

He added: "The opportunity for us in the media, is to really step up. We can't do all this on our own. Businesses and governments and society will have to do their part. But what we can do is to go out and make a case to audiences about the role that professional newsrooms play."

Ms Ressa said Singapore's approach may not work in other countries.

She noted how platforms like Facebook operate across jurisdictions, each with its own belief on topics like democracy and freedom. This is a challenge when trying to find one standard solution in managing that platform.

Responding to a question from the audience, CNN's Ms Lee said that presenting balanced news is as important as addressing fake news.

She cited the ongoing protests in Hong Kong, which are entering their 16th week under the constant scrutiny of an international audience.

Will there be a turning point in the battle against fake news?

Mr Gary Liu, chief executive officer of South China Morning Post, was doubtful there would be change, unless economies and markets are directly affected.

He said society has not suffered enough economically to understand the harm from fake news.

"The markets have not been hurt by it. The reality is that the capitalists in this room have access to direct and honest information, 99 per cent of the time. You guys are trading off of real information," he said.

"You're lucky enough to have the systems of access, and the intelligence to know truth from falsehood. The vast majority of the world population does not have that level of understanding and education."

He suggested to the business leaders in the audience: "You should start pricing the social impact of fake news into what you do."