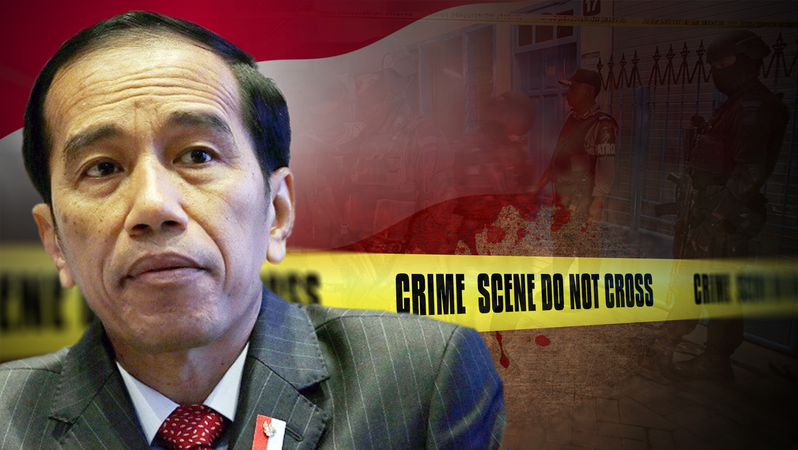 Indonesian President Joko Widodo says he has ordered the National Police and State Intelligence Agency chiefs to coordinate with the military to “investigate and take stern measures against the perpetrator and the network behind the incident”. Photo: Getty Images

Jokowi visited Wiranto at the Gatot Subroto Army Hospital (RSPAD) in Central Jakarta, where the senior minister was being treated for two abdominal stab wounds sustained in the assault.

The president said he had ordered National Police chief General Tito Karnavian and State Intelligence Agency (BIN) chief Budi Gunawan to coordinate with the Indonesian Military [TNI] to “investigate and take stern measures against the perpetrator and the network behind the incident”.

“Pak Wiranto is now conscious but in the process of surgery,” Jokowi said at around 5.30pm on Thursday. “Now the most important thing is for [authorities] to hunt down the [terrorist] network.”

Wiranto was attacked with a bladed weapon during a working visit to Pandeglang, Banten, allegedly by a man identified by police as SA aka Abu Rara.

Jokowi said he had immediately instructed his staff to send a helicopter to transport Wiranto, who had initially been treated at the emergency unit of the Berkah Pandeglang hospital, to the RSPAD.

Abu Rara, who was arrested alongside his wife identified by the initials FA, had been exposed to radical teachings that authorities said had led him to launch the attack against the chief security minister.

Budi said Abu Rara had initially been a member of the JAD cell in Kediri, East Java, and authorities had detected his move to Bogor in West Java and later to Menes in Pandeglang to remarry after he got divorced from his first wife.

The suspect had reportedly been under the BIN’s watch and monitored as he was reportedly hoarding bladed weapons, such as knives.

When asked how the attack could still happen despite the monitoring, Budi said that JAD worked in cells comprising both lone wolves and small groups. “There are so many cells, so we also call on the public to help us monitor the cells,” he said after visiting Wiranto.

Prior to Thursday’s attack, Wiranto was among four state officials reportedly targeted in an assassination plot planned to take place amid post-election protests that turned into riots in the capital in late May.

In his statement, Jokowi also called on the public to stand together to fight against terrorism and radicalism. “Only through a joint effort can we get rid of them from our beloved nation,” he said.