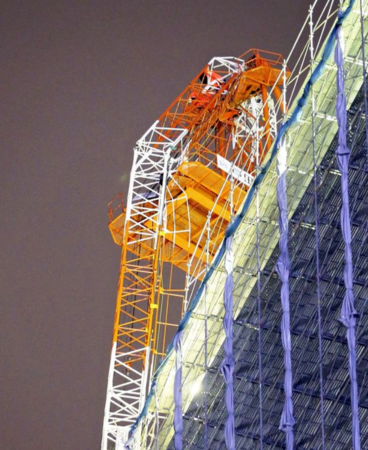 The Yomiuri Shimbun A crane twisted by a strong wind is seen on a rooftop of a building under construction in Shibuya Ward, Tokyo, on Saturday.

The Yomiuri Shimbun/ Powerful Typhoon No. 19 barreled north through the Kanto region, leaving behind record-setting rainfall in some areas and widespread damage from flooding, most notably from the overflowing of the Chikuma River in Nagano Prefecture on Saturday evening.

Embankments along 21 rivers were breached and about 140 rivers flooded nationwide as of 6 p.m. Sunday.

The typhoon, which made landfall on the Izu Peninsula in Shizuoka Prefecture at about 7 p.m. Saturday, led to evacuation orders and advisories being issued to more than 10 million people, mainly in the Tokyo metropolitan area.

The Japan Meteorological Agency held an emergency press conference Saturday, urging citizens to “take action to protect their lives.”The agency said that in the 48-hour span up to 3 p.m. on Sunday, record rainfall was recorded in Hakone, Kanagawa Prefecture, and Izu, Shizuoka Prefecture, which were drenched with 1,001 mm and 760 mm, respectively.

Strong winds pounded the area, with a maximum wind speed of 41.5 meters per second recorded at 9:14 p.m. on Saturday in Chiyoda Ward, Tokyo.

In response to flooding of the Tama River, the Tokyo metropolitan government requested the Self-Defense Forces be dispatched for disaster relief on Saturday evening.

According to a Yomiuri Shimbun tally, as of 5 p.m. on Sunday, Typhoon No. 19 had claimed the lives of 26 people in Tochigi, Gunma, Kanagawa, Iwate, Miyagi, Fukushima, Saitama, Chiba and other prefectures, with 19 people missing.

In Tomioka, Gunma Prefecture, a landslide behind a residential area killed one man, and left two others missing.

In Ichihara, Chiba Prefecture, a 50-year-old man was killed when the vehicle he was riding in was blown over by a sudden gust of wind.

In Sagamihara, a woman was found in cardiac arrest in a building that had collapsed due to a landslide early on Sunday and was later confirmed to have died, according to the Sagamihara Fire Bureau.

In Tomi, Nagano Prefecture, a road near the Chikuma River collapsed, taking three vehicles with it. Three people from two of the vehicles were rescued, but three people in the other vehicle that was swept away have yet to be found, according to the city government.

In Nihonmatsu, Fukushima Prefecture, two people were reported missing following a landslide. In Gotenba, Shizuoka Prefecture, two men were swept away in an irrigation channel and one is still missing.