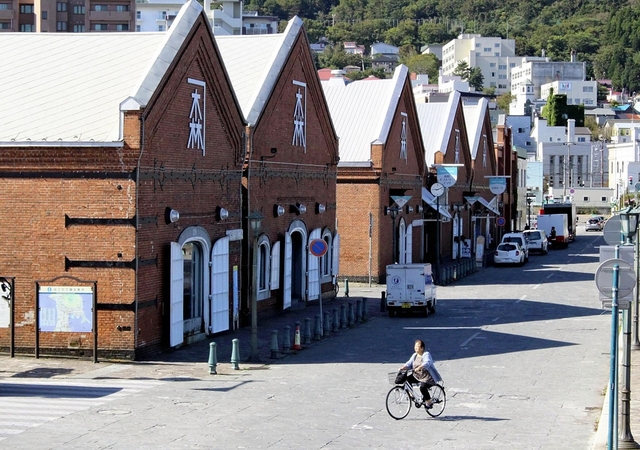 Few tourists are seen at a quiet bay area in Hakodate in Hokkaido, Japan. Photo: The Japan News/ANN

The worsening relationship between Japan and South Korea has had a negative impact on tourism, casting a shadow over the regional economy.

According to the Japan National Tourism Organisation, the number of South Korean visitors to Japan in September decreased by nearly 60 per cent from the same month last year. With the situation expected to continue for a significant amount of time, some local governments and organisations are trying to attract visitors from countries and regions other than South Korea.

Since this summer, South Korean visitors to Noboribetsu Date Jidaimura, a tourist spot popular among foreigners for ninja shows, in Noboribetsu, Hokkaido, have almost disappeared. In the past, people from that country accounted for the majority of admissions to the cultural park.

“No tourism facility can do anything about the diplomatic issues between Japan and South Korea,” a director of the company operating the facility said.

Reservations to stay in the Jozankei Onsen hot spring area in Sapporo have also been cancelled by South Koreans. According to the Jozankei Tourist Association, the number of South Korean tourists to that area fell below 1,000 in September, although it was 10,000 per month on average until this spring.

The decline in the number of South Korean visitors is likely to continue for the time being. According to the Land, Infrastructure, Transport and Tourism Ministry, eight South Korean airlines, which operated about 1,200 flights a week to and from Japan up to July, have so far decided to reduce such flights by a total of about 30 per cent.

In Hokkaido, some local governments and financial institutions have begun to offer financial assistance to companies. North Pacific Bank, the largest bank in Hokkaido, has launched consultation services at all its branches in the prefecture for businesses such as hotels, restaurants and souvenirs shops that have suffered a decline in tourists.

The Hokkaido government has earmarked 30 million yen (Bt8.3 million) for urgent countermeasures, such as having websites aimed at Chinese people introduce tours to Hokkaido, and encouraging airlines to launch new routes to places other than South Korea.

In Tottori Prefecture, where flights to South Korea have been suspended since July, the prefectural government approached Chinese airlines and succeeded in having regular Shanghai flights established from January next year.

Since the latter half of last year, the number of South Korean visitors to Japan has been registering year-on-year losses due to the weak won and sluggish economy. South Korean tourists spend less in Japan than people from other countries and regions because the two countries are geographically close and many South Koreans stay only a few days in Japan.

In 2018, South Korean tourists spent about 78,000 yen per person in Japan, the lowest among the 20 major countries and regions. This is only about one-third of Australians’ spending.

According to the Japan Research Institute, spectators at the Rugby World Cup ‒ many are believed to be affluent people who will stay a long time in Japan ‒ are projected to spend a total of 105.7 billion yen.

The institute expects the economic impact on an annual basis of the decline in visitors from South Korea to be offset by the RWC effect.

“It’s necessary to strengthen promotional activities aimed at European and American customers, whose consumption is high,” said Kazuki Kita- tsuji, a researcher at the institute.

In Oita Prefecture, which has popular hot spring areas such as Beppu and Yufuin, the number of South Koreans has decreased by 70 to 80 per cent, according to an official from an association of local hotel operators.

But changes in South Koreans’ consumption habits are beginning to be seen in the prefecture. “The number of South Korean individuals who spend ¥20,000 to ¥30,000 per night for a room is gradually increasing”, while the number of group travellers, who usually spend less than ¥10,000, has decreased, the official said.

Toru Azuma, a professor of Rikkyo University researching tourism, said: “This is a good opportunity to think about a shift from quantity to quality. It’s important to prepare options for visitors with various needs, such as people who want a leisurely trip even if it’s expensive, and to increase the fans of Japan over the long term.”