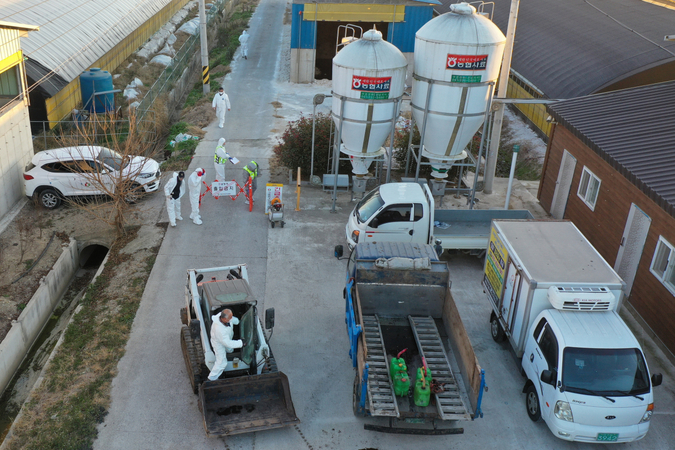 Quarantine officials prepare to cull ducks at a farm in Naju, 355 kilometers south of Seoul, on Wednesday. (Yonhap)

Authorities are investigating the suspected case in Naju, 355 kilometers south of Seoul, according to the Ministry of Agriculture, Food and Rural Affairs. The samples were gathered from a slaughter house.

The farm had killed all of its 22,000 ducks to be sold at market, but they were discarded after the suspected case.

Another duck farm from the same town confirmed a highly pathogenic bird flu case the previous day. If found to be seriously contagious in a test, it will become the third such case from South Jeolla Province alone.

So far, South Korea has reported seven highly pathogenic avian influenza cases from poultry farms across the country, including two from Gyeonggi Province that surrounds the capital city.

Authorities cull poultry within a 3-km radius of infected farms. Birds at farms with suspected cases are also destroyed.

Highly pathogenic avian influenza is contagious and can cause severe illness and even death in poultry.

The country reported its first highly pathogenic case in 32 months in late October in Cheonan, 92 kilometers south of Seoul, from wild birds.

Since then, a total of 22 cases have been found from wild bird habitats across the country, according to the latest data provided by the ministry. Health authorities are investigating more than 10 suspected cases among wild birds. (Yonhap)