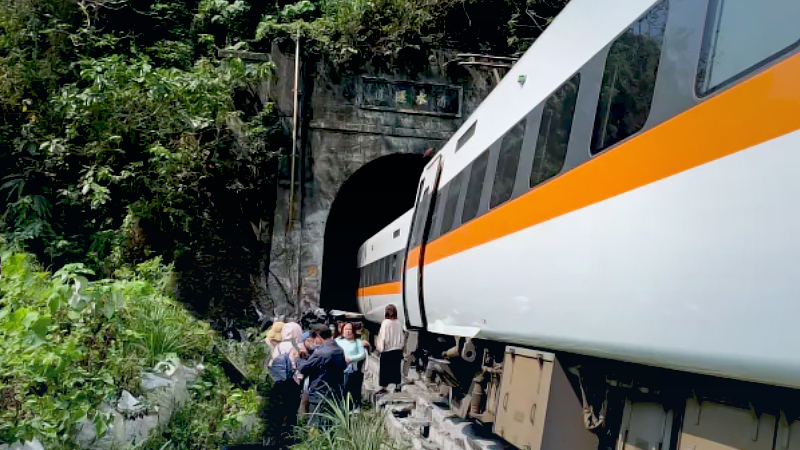 By Katherine Wei
The Straits Times/ANN

TAIPEI - Flags in Taiwan will be lowered to half-mast for three days, starting on Saturday (April 3), to mourn the people who were killed when an express train derailed in a tunnel on Friday morning after hitting a truck that had slid down a bank onto the track.

At least 50 on board the train were killed - the youngest was six years old - and more than 140 injured in the island's worst rail disaster.

The 408 Taroko Express, carrying four crew members and 492 passengers, was travelling from Taipei to Taitung, where most of its passengers hail from. Many were heading home at the start of the Qing Ming Festival to tend to family graves. One French citizen was among the dead, officials said.

The eight-carriage train derailed just after entering a tunnel in Hualien County. The Taiwan Railways Administration (TRA) said the train hit a construction vehicle that had slipped onto the tracks at the tunnel's mouth.

Friday's accident was the deadliest railway accident in Taiwan since the TRA introduced the Tze-chiang limited express, its fastest train category, in 1978. The Taroko Express is a newer model of the Tze-chiang trains.

According to the National Fire Agency, some passengers' bodies were not in one piece when the rescuers arrived, which caused confusion when updating the death toll.

"I hope he didn't suffer any pain," said his mother to Taichung Mayor Lu Shiow-yen, who visited the Yuan family after the news of the operator's death.

Mr Yuan, the youngest child of the family, is survived by his mother, three sisters and wife.

The TRA has organised an emergency response team to handle the accident.

The driver of the truck has been taken to a Hualien police station for questioning, said Hualien County Police Bureau chief Tsai Ting-hsien on Friday afternoon.

The truck's handbrake was allegedly not engaged properly, the authorities said. The TRA is planning to demand compensation from the company that owns the truck.

"Who knew the truck would just slide down to the tracks 28 minutes later?" said an employee surnamed Chang.

Though allegedly caused by the truck, Friday's crash has sparked anew longstanding questions about rail safety in Taiwan.

Upon seeing the twisted train in the tunnel, a Red Cross rescuer leading a team of 11 rescuers described the site as a "living hell". Ambulances were dispatched from Hualien, Yilan and New Taipei City to help the passengers.

The death toll rose as more were pulled from the twisted train carriages, while those uninjured opened exits on the train's top and hopped down with the help of fire fighters. All survivors were helped out of the wreckage before 7pm.

The TRA said it may take a week for the site to be fully restored.

The Taroko Express is one of the local trains that allow passengers to purchase standing tickets, and the 408 train was a packed train with many passengers standing. They were tossed about by the crash impact.

The Taiwan Transportation Safety Board is conducting an investigation into the accident, but it may take between three and six months for a conclusion to surface.

Friday's accident reminded many of the last serious train accident that happened in October 2018, when a Puyuma train derailed in Yilan, just north of Hualien. The Puyuma accident caused 18 deaths, and over 200 people were injured.

The injured on Friday were sent to at least six hospitals near the crash site.

President Tsai Ing-wen is scheduled to visit the injured in Hualien's hospitals on Saturday morning, and has expressed her sorrow over the loss of so many people.

"It's regrettable that an accident happened on the first day of holidays, leading to heavy casualties," she said at a briefing in Taipei on Friday, vowing to conduct a thorough investigation into the cause of the collision.

"The mainland is highly concerned about the rescue progress," said Mr Ma Xiaoguang, a spokesman for the TAO.