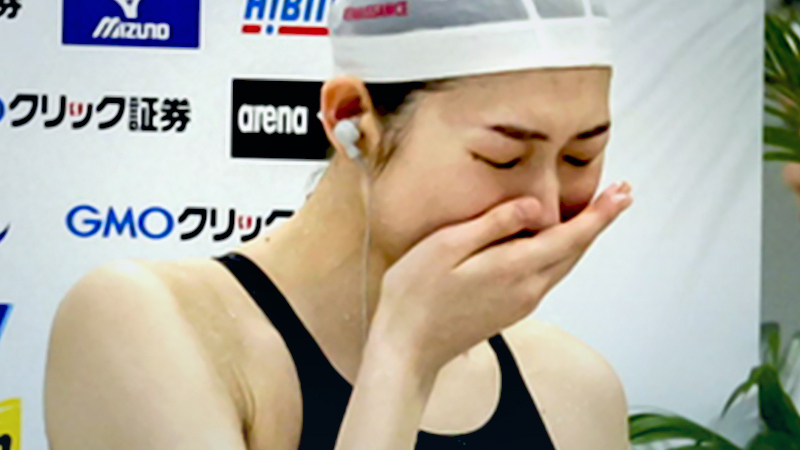 Rikako Ikee breaks down in tears during a post-race interview after winning the women’s 100-meter butterfly on Sunday. (The Yomiuri Shimbun)

Rikako Ikee, who returned to competition only last summer after undergoing treatment for leukemia, earned an unexpected ticket to the Tokyo Olympics when she won the women’s 100-meter butterfly at the Japan swimming championships in Tokyo on Sunday.

Ikee clocked 57.77 seconds in the final at the Tokyo Aquatics Centre, the venue for the Tokyo Olympics, and she will return there this summer after surpassing the Olympic qualifying standard of 57.92 set by the Japan Swimming Federation to secure a place on the 4x100 medley relay team.

It was a result that even she had never considered attainable since being diagnosed with leukemia in 2019.

“Regardless of what place I took, I came with the thought of being just happy to be here,” Ikee said in a tearful post-race interview. “I thought a victory was still far off in the future, but I trained for the purpose of winning, and my efforts paid off.”

Ikee, the national record-holder in the 100 butterfly of 56.08, won three consecutive national titles in the event up to 2018. Her time on Sunday was 1.67 seconds better than the one posted in the first final of her comeback at the Tokyo Open on Feb. 20.