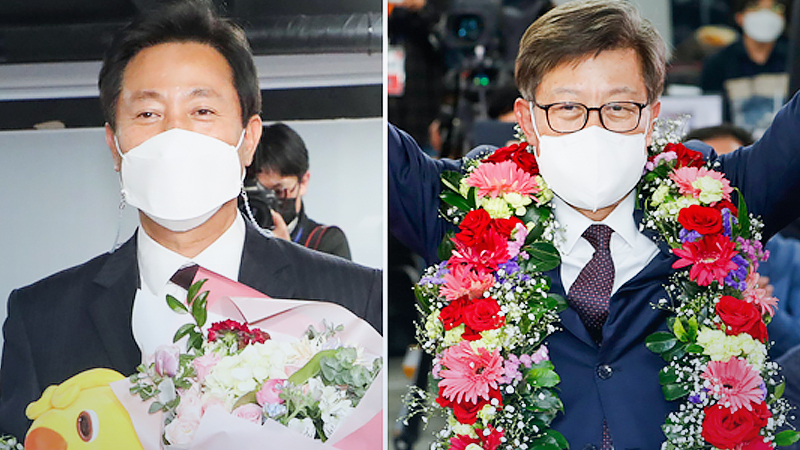 The ruling Democratic Party of Korea suffered an election debacle Thursday in the Seoul and Busan mayoral race regarded by many as a litmus test for next year's presidential electionon.

Oh Se-hoon, a former mayor and the sole candidate from the main opposition People Power Party, won the by-election for Seoul mayor by a landslide.

Oh of the main opposition People Power Party defeated his rival from the DP, Park Young-sun, 57.5 percent to 39 percent to claim the Seoul mayoral seat, the National Election Commission said.

Both Park and Kim of the ruling party admitted their defeat.

The total number of eligible voters is about 11 million, with 8.4 million in Seoul and 2.9 million in Busan.

The National Election Commission said that the turnout for Seoul and Busan stood at 55.5 percent, 4.7 percent lower than the 2018 local elections.

The turnout for the by-election was the highest in the three conservative and affluent districts of Gangnam, Seocho, and Songpa, which are the dominant regions in the opposition camp.

By district, Seocho-gu ranked first among the 25 districts in Seoul with 59.8 percent of the vote, followed by Songpa-gu with 57.2 percent and Gangnam-gu with 57 percent as of 7 p.m.

The term for the new mayor will be about a year and three months, until June 30, 2022. The new mayors, including former Seoul mayor Oh, can serve up to three consecutive terms.

For both ruling and opposition parties, the results of the elections were critical as they can be a prelude to determining the fate of next year’s presidential election.

As Oh wins by a landslide, the People Power Party is likely to take the lead in reorganizing the opposition bloc and preparing for the presidential election.

Analysts said  President Moon Jae-in may become a lame duck earlier than expected and upheavals within the party will be inevitable for a considerable time.

The DP has been under fire as its two mayoral by-elections were called after the previous mayors -Park Won-soon in Seoul and Oh Ke-don in Busan quit in the face of sexual harassment allegations.

During the campaigning in Seoul, both candidates shared their opinions on easing regulations on the height of apartment buildings, but differences were revealed on real estate development.

While Park pledges to provide housing under the initiative of state-run organizations, such as the Korea Land and Housing Corporation, Oh has pledged to push for development by easing private regulations.