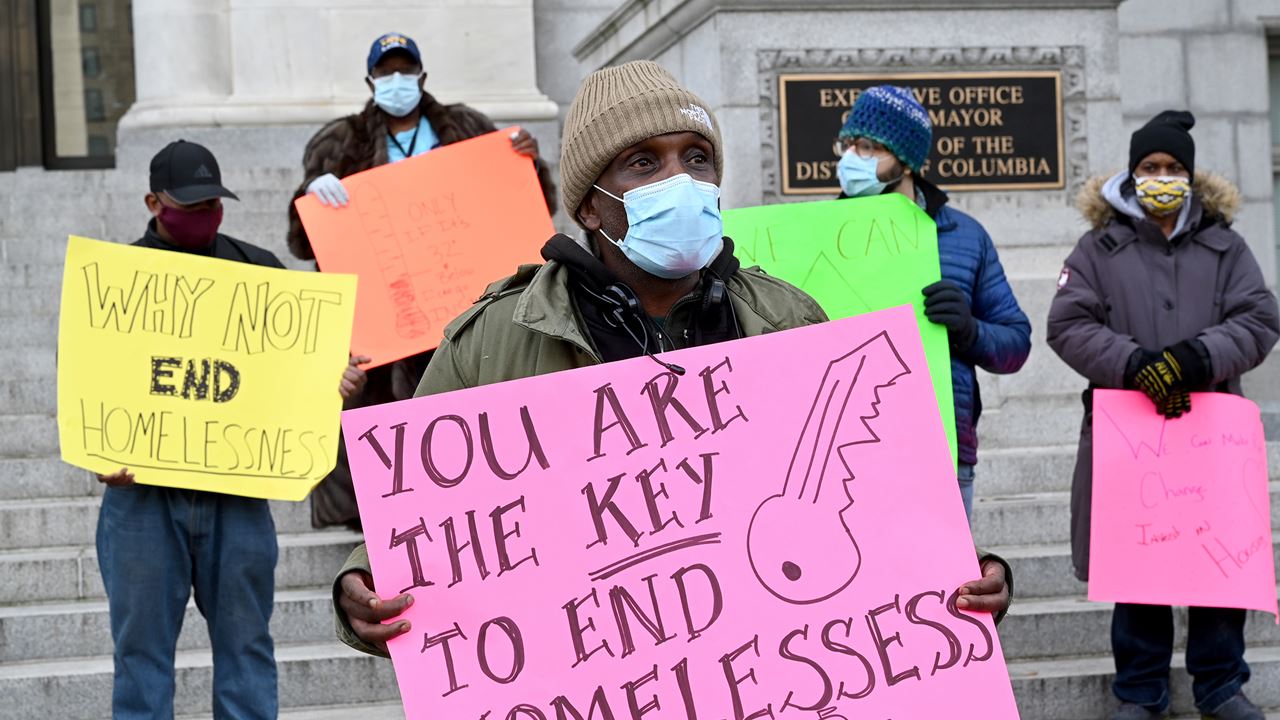 WASHINGTON - The Biden administration mounted an aggressive push reshaping national housing policy in a span of 48 hours this past week, replacing a key regulator and pushing a flurry of other changes to try to address growing concerns within and outside the White House about a housing crisis for millions of renters and vulnerable Americans.

On Wednesday, the White House named a new acting director of the powerful Federal Housing Finance Agency, Sandra Thompson, who called out the lack of affordable housing and access to credit for many communities of color. The White House appointed her hours after tossing a Trump appointee.

Then on Thursday, the Centers for Disease Control and Prevention extended its eviction moratorium by one month. The Biden administration also announced new initiatives to quicken the disbursal of rental relief and encourage local governments and courts to prevent evictions. As part of the effort, the White House will convene a summit this Wednesday for "immediate eviction prevention plans" to prevent an "eviction crisis."

Housing has emerged as one of the most unequal and consequential parts of the economic recovery from the coronavirus pandemic. Low interest rates, cheap mortgages and bidding wars are fueling a housing boom for wealthier Americans and making homeownership out of reach for many first-time buyers. Meanwhile, housing is a top expense and worry for millions of renters and unemployed workers, and advocates fear a wave of homelessness once the CDC's final moratorium lifts July 31.

It remains to be seen whether this bucket of housing policy shifts develops into a clear road map for how President Joe Biden plans to handle one of the largest parts of the economy. Housing is an area that Democrats have traditionally tried to backstop with government support to make it more accessible for more people.

"There isn't anything that has changed in the intensity with which we're working," said Erika Poethig, special assistant to the president for housing and urban policy at the White House's Domestic Policy Council. "I do think the expectation around the end of the moratorium, and the consequence of that, have raised public awareness to the broader housing affordability challenges, and the consequences to losing one's shelter and housing and how devastating that is."

While the Biden administration has focused extraordinary effort on passing the stimulus package, overhauling the tax code and ushering in major infrastructure investments, less public attention has been devoted to housing policy. However, some experts believe challenges - for renters, homeowners and the homeless - are fast approaching.

Even though Congress has allocated roughly $46 billion for emergency rental aid through pandemic-era aid packages, much of that money hasn't reached tenants. On Thursday, the White House and Treasury Department released new guidance to help streamline application processes, calling for an "all hands-on-deck effort," which is partly why the White House's housing summit on Wednesday will bring together 50 cities to discuss plans for preventing evictions.

The delays in getting relief in the hands of vulnerable tenants is a key reason advocates were clamoring for an extension to the eviction moratorium.

For their part, the Biden administration said the decision to extend the eviction moratorium was not a political decision made by the White House but was made by career officials at the CDC. The CDC signaled there would be no further extensions beyond July 31.

Now, state and local governments that have struggled to quickly prop up programs to disburse the money have a little more time.

"In the next 30 days, there's no excuse to get this money out," said David Dworkin, president and chief executive of the National Housing Conference. "We have the money to pay the rent. We need to get it paid."

Tara Raghuveer, the Homes Guarantee campaign director at People's Action, a national grass-roots organizing network, said she has little confidence that much can change by the end of July. She described the new deadline and the administration's push to hustle emergency rental relief out the door as "too little, too late."

Raghuveer said there should have been the same level of urgency months ago. As the pandemic raged, Raghuveer said many landlords looked to loopholes that allowed them to remove people from their homes, despite the eviction moratorium. In Kansas City, Mo., where she is also a local organizer, Raghuveer said she could immediately think of several renters whose debts are piling up and who will promptly be evicted after July 31.

"We're just circling the drain, and eventually, poor and working-class people are going down the drain," Raghuveer said. "We could run around all we want for the next 30 days, as we have been for the last year, talking about how we are coming up on an eviction cliff, an eviction tsunami."

Housing is central to the Biden's administration efforts to address racial inequity, which includes boosting Black homeownership and increasing rental housing in neighborhoods with more educational and economic opportunities. The pandemic has only worsened racial and economic gaps, and some economists are worried there could be a repeat of what happened after the Great Recession, when Black homeownership plummeted and never recovered.

A senior White House official pointed to a range of additional housing priorities to help keep people in their homes. For example, Biden's original proposal for the infrastructure package called the American Jobs Plan aimed to build and rehabilitate more than 500,000 homes for low- and middle-income home buyers, and invest $40 billion to improve public housing. (Those provisions weren't included in the Senate bipartisan infrastructure deal reached Thursday but could be passed through reconciliation.) The White House official also said new leadership at FHFA would help expand access to credit, including for Black and Brown homeowners.

The decisions come as housing in America increasingly diverges along two tracks.

All over the country, buyers clamor in competitive bidding wars that often hinge on all-cash offers, well above asking price. Hefty price tags for building materials push prices even higher. Oftentimes, only wealthier Americans can enter the hot housing market and take advantage of low interest rates, high savings and the flexibility to work remotely.

Policymakers at the Federal Reserve say the boom in home prices doesn't threaten financial stability. But there is concern that the Fed's low interest rates and other supports for the economy are exacerbating the run-up in prices. It's unclear if the price boom will fall back down.

"If we want to make housing affordable, we should be talking about how government subsidies, and how monetary policy - the Fed's easy money policy of low interest rates and its purchase of nearly half a trillion dollars in mortgage-backed securities annually - are causing rapid home price inflation," Sen. Patrick Toomey, R-Pa., said at a Thursday hearing. "The experiment of a vast subsidy framework combined with accommodative monetary policy have done little to address affordability."

A key test for the administration will be ensuring access to affordable housing is not permanently held back by the covid crisis.

The White House appeared to step in that direction when it appointed Thompson as acting director of the FHFA. In a statement Wednesday night, Thompson pointed to "widespread lack of affordable housing and access to credit, especially in communities of color."

FHFA oversees mortgage giants Fannie Mae and Freddie Mac, which guarantee roughly half of the $11 trillion U.S. mortgage market. Unrelated to the extended eviction moratorium, FHFA last week also announced it would extend a moratorium on foreclosures of mortgages backed up by the government for another month.

Thompson replaced Trump appointee Mark Calabria, a libertarian economist. The switch at FHFA came immediately after the Supreme Court ruled that the FHFA's leadership structure was unconstitutional, because it limited the president's ability to remove the FHFA director, except "for cause." Thompson previously served as deputy director of the Division of Housing Mission and Goals, overseeing FHFA's housing and regulatory policy, fair lending and other regulatory matters.

In another move to nominate regulators with expertise on vulnerable homeowners, the administration last week tapped Julia Gordon for commissioner of the Federal Housing Administration, which insures mortgages for low- to moderate-income borrowers. Gordon previously led the National Community Stabilization Trust, which helps rehabilitate homes in underserved areas.

The administration also moved to reinstate a 2013 rule that codified a decades-old legal standard that the Trump administration had gutted. The rule was aimed at making the housing industry justify practices that hurt Black and Latino Americans, such as overly restrictive criminal-background policies and the use of artificial intelligence to predict creditworthiness.

Alicia Mazzara, an expert on the housing policy team at the Center on Budget and Policy Priorities, said housing issues often do not get enough attention from lawmakers. Mazzara, who has called for an expansion of the Housing Choice Voucher Program, said many renters would not be in such dire straits had there been more support going into the covid crisis.

Now the question is what comes next.

"With housing getting this much attention, I think the hope is this could be a moment for policymakers to say, 'Hey, we should really enact some long-term solutions,' " Mazzara said. "It's really hard to implement emergency fixes in an emergency."