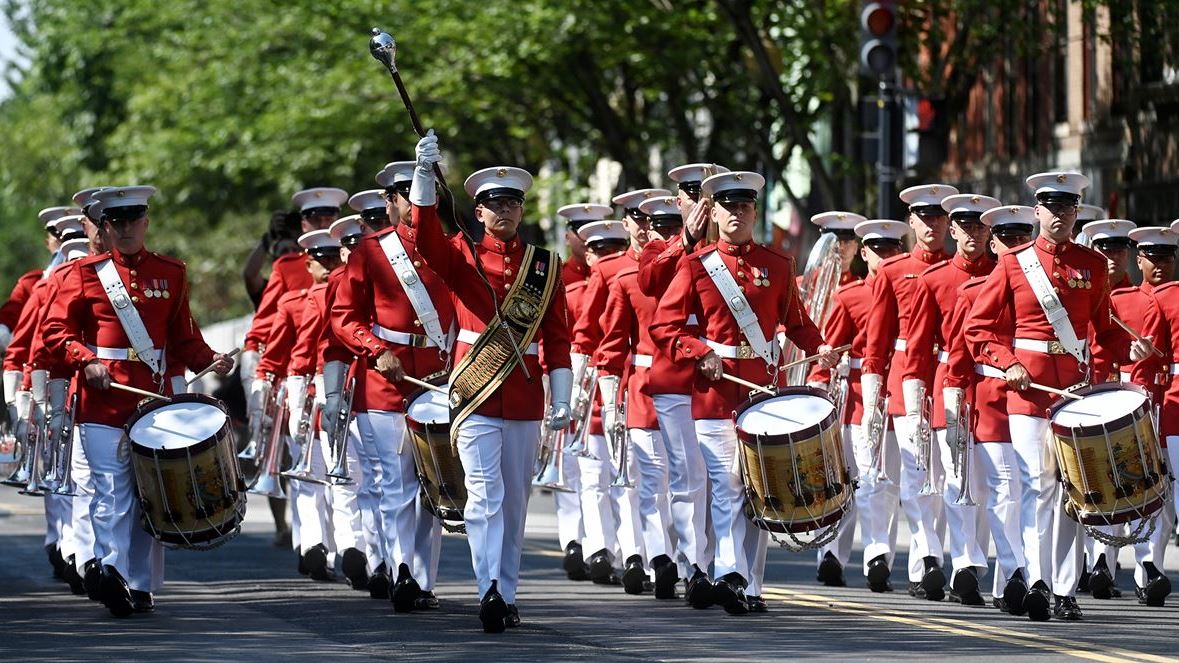 WASHINGTON - Thousands of Americans gathered in the nations capital Sunday, welcomed beneath a bright blue sky by a city eager to host an Independence Day that resembled some version of a normal one.

In a moment when the pandemic is finally easing, the day began with maskless actors dressed as George and Martha Washington welcoming maskless tourists to Constitution Avenue and was scheduled to end with rockets glaring red over adoring citizens no longer required to stand six feet apart - the way that July Fourths in D.C. are meant to. In between, children waved flags along parade routes, house-partiers chugged bottles of light beer, immigrants became citizens at Mount Vernon and a man took a knee in front of Abraham Lincoln's marble statue to ask his girlfriend to marry him.

"We can feel it," Jeff Litten said. "The city is reawakening."

He was one of about 10 congressional staffers and National Institutes of Health employees who'd planted four American flags in the ground near the Washington Monument, where they'd decided to throw a "dad party": Hawaiian shirts, corn hole, a mini portable grill.

They'd stayed connected during the pandemic over Zoom and were elated to finally celebrate something together, in person, along with thousands of other revelers.

There was perhaps no more symbolic sign of D.C.'s inching toward the ordinary than the 6:30 a.m. reopening of the long-shuttered plaza in front of America's most important home.

"Mama, that's the White House?" said 10-year-old Zoey Gaines, as she turned around to her trailing mom, Sara. "Oh my God!"

Zoey - and hundreds of other people crowded along the new high black fence around 1600 Pennsylvania Avenue - were getting a closer look at the executive mansion than any members of the public have had in more than a year.

"Go up to the fence so I can take your picture," Sara said, motioning for her 11-year-old son , Jalen, and 8-year-old daughter, Samiyah, to join Zoey in front of the White House.

Her children couldn't believe how big it was.

"How many bathrooms are in there?" asked Samiyah.

Zoey, sitting atop the ledge of the base of the fence, with one leg swaying, answered confidently: "Um, definitely 35."

The family hadn't come from New Jersey to the District because of who now lived behind the black fence, Gaines said, but instead because she and her kids finally felt safe to travel - and what better place to celebrate America's birthday than in its capital?

Late morning, Karlan Jankowski biked to the Archives with two friends, all of them wearing tricorn hats. They stopped to add their name to the reprinted Declaration of Independence.

The three had just come from the Barracks Row parade on Capitol Hill and planned to bike down later to Lady Bird Johnson Park, where they usually watch the fireworks.

Jankowski typically stays in D.C. on the Fourth, but it was the first time since 2017 that Dennis and Lindsey Gucciardo had joined her. Their disdain for the man in the White House had kept them away, but this year's celebration, Dennis hoped, would return to what it "should be."

"It's a focus on the celebration of America's independence and not one - " he started.

But it was that same person, Donald Trump, that made the holiday visit special for the Gulino family, who stopped by the former president's Trump International Hotel to take pictures of the gold letters emblazoned on the building's front.

"We just think it's cool to, kinda, see his name," said Tom Gulino. He and his wife and two teenage sons had flown more than 700 miles from Plainfield, Ill., to meet their 24-year-old son, a Marine who drove up from North Carolina, where he's stationed.

They had already visited many of the area's most famous tourist destinations, including the Ford's Theatre, the Supreme Court and Arlington National Cemetery. The Trump International Hotel was a must-see for the family, though its exact location was a bit of surprise.

"It's kind of ironic," Gulino observed, "it's in front of the IRS building."

They weren't the only Trump supporters out celebrating. Outside the White House, Mamadou Sako, a Black immigrant from central Africa, wearing a "Team Trump" cowboy hat and all-red shoes inscribed with "TRUMP," lamented the ouster of his beloved leader but was still delighted to see D.C. looking the way it's supposed to.

"To have this all open and see so many faces, it's just a joy," said Sako, who'd moved from Gabon to the District in 1987 and now works as a chef.

At about that same time, three miles west, D.C. Mayor Muriel Bowser strolled down MacArthur Boulevard NW, enjoying the crowd lined up for nearly 10 blocks along the Palisades parade route. Her daughter, Miranda, who wore a striped dress and a blue bow in her curly hair, perched on Bowser's hip as the mayor tossed green stress balls - "We Are Washington," they read - into a crowd in desperate need of some relief.

"Happy Fourth!" she shouted between hugs and high fives for onlookers.

For 8-year-old Carter Goldberg and his family - four generations sprawled on the grass near the Washington Monument - this Fourth was the happiest they could remember.

In May, the boy was admitted into an intensive care in Pittsburgh with a severe case of covid-19 after developing multisystem inflammatory syndrome, known as MIS-C.

He spent more than two weeks in the hospital, his family said, as his blood pressure plummeted.

Even after his release, he suffered from so much pain, and weight gain because of the steroids, that he struggled to finish the school year. His legs still hurt and he tires easily, his family said, though it was hard to tell as he chased a bird Sunday afternoon.

"I was this far away from catching it!" he called back, sporting a red, white and blue hat. "This far!"

Then he began to recount their recent itinerary. They'd been to the Washington Monument and the National Museum of African American History and Culture, he said, pointing to each. They'd eaten ice cream, too.

Listening, Stumph understood how remarkable it was for them to be there after what Carter had endured.

"After all that, it just feels like freedom," Diane said.

The country's 245th birthday follows a pair that were like none other in modern U.S. history, and in its capital, the wait for a dose of ordinary patriotic revelry has felt particularly long.

In 2019, Trump commandeered the holiday for what he dubbed "A Salute to America." In a ceremony that loosely resembled those thrown by authoritarian regimes, Coast Guard helicopters, an Air Force B-2 stealth bomber and Navy Blue Angels flew overhead before the president addressed a select group of VIP supporters in front of the Lincoln Memorial.

The next year's celebration, in 2020, proved no less unusual. Amid a still-raging pandemic, and just weeks after violent protests over George Floyd's death, the number of visitors to D.C. plummeted, with just one-tenth of the number of people riding in on Metro compared with the year before.

At Black Lives Matter Plaza, flags were burned and trampled. Elsewhere, Trump supporters scuffled with protesters. The president fanned those divisions in a speech from the White House's South Lawn, declaring that he would soon defeat "the radical left."

Much of the Mall, and beyond, has begun to look just the way it did pre-pandemic, pre-protests, pre-insurrection. The plywood on downtown buildings has disappeared, and the battalions of sweaty, disinterested high-schoolers have returned. The melodic, sometimes mind-numbing soundtrack of Constitution Avenue - those ice cream truck chimes - is back, as are the half-full Big Bus Tours that rumble by them. The Smithsonian museums have reopened, and in Lafayette Square, across from the White House, Segway tours pass by office workers eating their lunches on park benches.

But even as office workers and tourists return, D.C. won't be entirely what it was before, perhaps ever. Physical reminders of the city's long period of chaos persist.

In Lafayette Square, a public bathroom that last summer's protesters set ablaze has yet to be repaired. With its walls charred, the building is enclosed behind chain-link fence, like a museum piece on display for curious, or confused, passersby.

Across the road are the now iconic giant yellow letters declaring "BLACK LIVES MATTER," a permanent nod to what thousands of activists marched for on the city's streets.

And less than two miles away, just beyond the Peace Monument, black metal fencing still guards the Capitol. "AREA CLOSED," the red-lettered signs read, the result of an assault on American democracy that, among other things, forced the annual Capitol Fourth concert to be prerecorded and aired on television.

On Sunday afternoon, perched on the steps of the nearby reflecting pool, Alexander Foley set up a small easel and a 8.5-by-11-inch canvas. He sprayed it with a protectant and used the plastic wrap of a canvas as a palette.

With a thin brush, the Baltimore artist mixed globs of blue and red. Squinting on a lawn chair beneath an umbrella, Foley reimagined the building in front of him - without a fence. He wanted his canvas to reflect the normalcy and liveliness of the beloved holiday.

"I see the fences as a cage to the people's house," said Foley, who was joined by his rescue poodle, Amadeus. He had come to D.C. with a stack of canvases not to portray the capital exactly as it is, but as it used to be and the way he hopes it will be again soon.

For Nicolas Picard, none of the recent upheaval in D.C. or across the country mattered much on Sunday. He woke up Sunday feeling excited, but also nervous. He'd picked out his red chino-style pants the night before, but had to stop over at a friend's house to iron his blue pinstriped button down shirt because it was wrinkled.

By mid-morning, Picard had made his way to an open field overlooking the Potomac River at Mount Vernon, where the Frenchman joined 38 other immigrants - from Lebanon to Liberia, Mauritania to Moldova - who were about to become U.S. citizens.

He lived in the United States two decades ago before coming back to attend graduate school at Carnegie Mellon in 2011.

Picard, 32, began the process of becoming a citizen at almost the exact same time the pandemic swept the country. He watched a furious racial reckoning and the divisive presidential election that soon followed. It was a hard period to navigate, he said.

"There were many feelings," Picard recalled. "How do I make sense of the system of government and the protests and the civic activism that's taking place around me, as I become a citizen and I assert my patriotism?"

On Sunday, he stood for the national anthem and took the oath, and when the ceremony ended and onlookers applauded and cheered, a woman in front of him began to weep.

Picard understood why. America is deeply flawed, he knew, but now it was his home, and he had a say, a right to vote, a chance to help make it better.