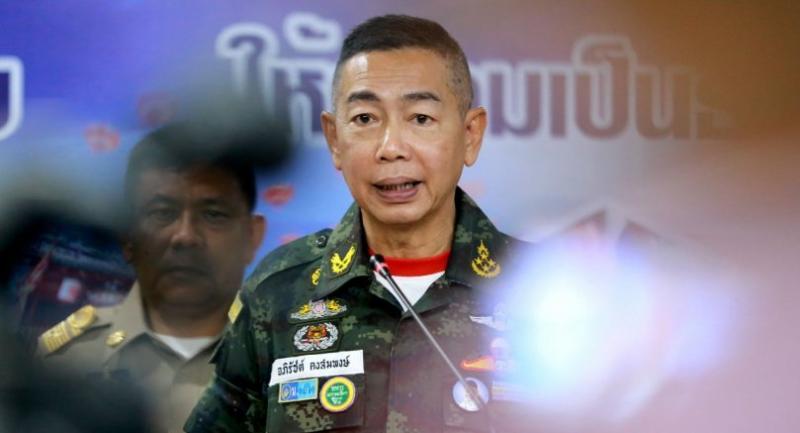 ANGRY WITH politicians proposing a cut in the defence budget, Army chief General Apirat Kongsompong ordered the ultra-rightist song “Nak Phaendin” to be aired every day on 160 Army radio stations across the country, but later withdrew the order. The song, also played within military camps and the Army headquarters, was to air twice every day – at 7am and noon – before Apirat had a change of mind. The song is played at all Army barracks during lunchtime. The Army chief reasoned earlier that the anthem broadcast was aimed at encouraging everyone to be aware of their duties and responsibilities towards the country.

“All this time, some people have been critical and distorting the truth to create misunderstanding about the work of the government and the Army. So, all units should clarify it using the media in its hands,” Apirat said.

The order was issued yesterday almost immediately after Army top brass told politicians, including Khunying Sudarat Keyuraphan from Pheu Thai Party, who are proposing a reduction in the defence budget as one of their policy planks, to listen to the song.

Several political parties during the electoral campaign have floated policies that affect the military. While the Army may have been strengthened in the past five years under the military-installed government, it also lost popularity with rising negative public sentiment over an increased Defence budget and the controversial military conscription.

The song, titled “Nak Phaendin”, means “burden to the country” and says one who is “worthless” or an “enemy of the nation” should be eliminated. The song was composed in 1975 by an Army officer and was part of the grand propaganda used against the communist movement in Thailand.

The song features lyrics that condemn any act of treason, including ungratefulness to the monarchy, instigating conflict among Thais and treachery.

In the notorious student massacre on October 6, 1976 at Thammasat University, “Nak Phaendin” was frequently played to justify the crackdown as well as to boost the courage of right-wingers who had engaged in elimination of the alleged threat. Top Army members and leaders of the ruling junta yesterday also appeared protective of the Army’s interests in opposing the policy proposal to reduce the defence budget.

Junta chief and Prime Minister Prayut Chan-o-cha yesterday warned politicians to be mindful of their language during the electoral campaign. If they did not consider reality and the national interest, they would have to take responsibility for their actions one day.

General Prayut, who toppled an elected government in the 2014 coup and is now a premiership candidate of the pro-junta Phalang Pracharat Party, stressed that the Army had made enormous contributions to the country. Besides protecting the national sovereignty, they had also played a role in other areas such as disaster relief and drugs control, he said.

Junta No 2 and Defence Minister General Prawit Wongsuwan said briefly but firmly: “Listen to the song that the Army chief mentioned. Listen to it.”

Two social science experts voiced concerns yesterday, suggesting that the invocation of the anthem pointed to a perilous situation.

Paul Chambers, an expert on military affairs and a lecturer at Naresuan University, told The Nation yesterday that the Army chief’s allusion to the song is extremely dangerous if he was suggesting that those politicians were an enemy of the state or was threatening to stage another coup.

Anusorn Unno, dean of Thammasat University’s Faculty of Sociology and Anthropology, said that Apirat was trying to distract the public from criticism about the size of the Army’s budget and the conscription programme.

“By mentioning this song, General Apirat conveniently turns critics of the Army into enemies of the state,” the expert said. “But we have to be clear that the Army is just a state apparatus to protect sovereignty. The Army is not the state itself. It has to be accountable.”

Anusorn said what the Army chief was doing was dangerous. Indirectly calling Army critics “Nak Phaendin” is tantamount to inciting hatred, which should be the last thing he wants given the fact that the country is already plagued with political division, the expert said.