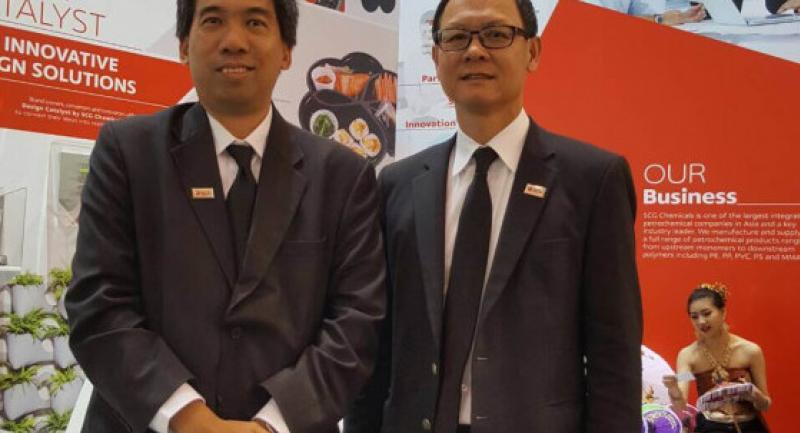 SCG CHEMICALS has achieved key breakthroughs in its research and development (R&D) efforts, including two new products that it hopes will disrupt the petrochemical and non-petrochemical industries worldwide and create a huge new revenue stream for the company.

The chemicals business unit of Siam Cement Group (SCG), one of Asean’s leading industrial conglomerates, is currently showcasing the new products – a “next-generation” high-density polyethylene (HDPE), and CIERRA, a functional material – at “K 2016”, an international trade fair being held in Dusseldorf for the plastics and rubber industries.

Today is the final day of the event, which opened its doors on October 19.

President Cholanat Yanaranop said SCG Chemicals was gearing up to launch the new HDPE – a result of the company’s R&D collaboration with its Norwegian research arm, Norner – late next year or early 2018.

CIERRA, which is a result of its collaboration with Oxford University in the United Kingdom, is expected to be launched towards the end of 2018.

SCG expects CIERRA to create a “big bang”, due to its wide variety of possible applications and potentially huge markets, he said.

“If we can get into the right business models, it [CIERRA] can bring in tens of billions of baht in sales revenue,” he added.

Timothy McCaffery, 38, former executive at a global specialty chemicals and performance materials company, was recruited in June to spearhead SCG’s new business under the title of global business director for New Materials and Technology.

He said the company was using the “K 2016” event to find potential partners to help it bring CIERRA to global markets.

Cholanat said CIERRA, thanks to its better properties, could replace aluminium foil in the packaging market and silver nano in the anti-microbial |market.

Similarly, SCG believes its new HDPE will create a big impact on the petrochemical industry, and that it will help lift the company into the world’s top-three polyethylene (PE) producers in terms of value in the next four to five years.

Packaging film will be a major application of the new HDPE, in addition to PE pipe, for which SCG is already one of the world’s top five manufacturers.

SCG is redesigning and modifying its HDPE plant at Map Ta Phut, in Rayong province, to make half of the facility’s 800,000-tonnes annual capacity capable of producing both old and new HDPE resins – at a total investment of less than Bt1 billion.

It expects to manufacture 10,000 tonnes of new HDPE in the first year, and to reach full 400,000-tonnes capacity within the next four to five years.

CIERRA is part of SCG Chemicals’ drive into non-petrochemical businesses.

Cholanat said non-petrochemical businesses were expected to contribute as much as one-third of SCG Chemicals’ revenue in the next five to 10 years, thus helping it to offset the cyclical nature of the petrochemical industry.

The president added that he was quite certain SCG Chemicals would be able to increase its R&D budget from 1.6 per cent of sales to 2 per cent in the next two or three years. It also expects to have more than 140 new patent applications this year, compared to just 40 a few years ago.

Earnings before interest, depreciation and amortisation totalled Bt30.42 billion during the first half, up 43 per cent from the same period a year ago.