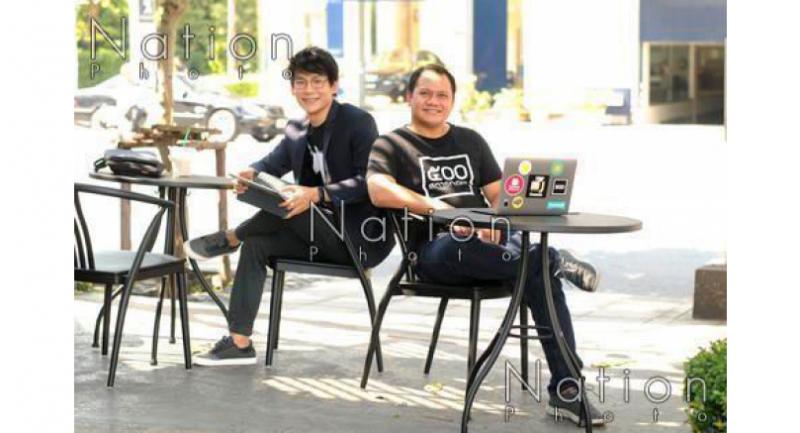 By Business Reporters
The Nation

THE NATION is this year naming not one, but two individuals as its “Businessman of the Year” – Natavudh “Moo” Pungcharoenpong and Ruangroj “Krating” Poonpoa, the co-managers of 500 TukTuks, the most active venture-capital fund investing in start-ups in Thailand.

This is in recognition of their joint ability to create major change and have a positive impact on the economy, which is being disrupted by innovation.

Natavudh and Ruangroj are new-generation businesspeople who disrupt traditional sectors with the new concept of doing business in the digital world.

What they are doing helps drive the country forward in the digital age, in line with what is happening in other countries, and the “Thailand 4.0” strategy.

They are playing a key role by helping create a new-economy army for the country.

Most of the investments are seed-stage funding of between $10,000 and $200,000 each, with the concept at 500 TukTuks being to seed early-stage start-ups so that they continue to grow for the next level of investment.

Natavudh and Ruangroj believe that building the start-up ecosystem in Thailand is crucial to the country’s digitisation, thus also enabling larger corporates to transform their business to the digital world effectively.

Natavudh is also co-founder of the most successful and largest start-up in Thailand, Ookbee, the e-book platform which is transforming the sector to become the leading digital-content platform.

He is also co-founder of FavStay, the rising-start start-up providing sharing-economy accommodation throughout Thailand, and with plans for other markets in Southeast Asia.

Ookbee’s revenue is not disclosed, but it has a team around 300 people across the countries in which it operates, and around 8.5 million users, some 4.5 million of which are active each month.

Ookbee is raising series-C funding, about which it will makes an announcement soon, he said.

Ruangroj is founder of the Thai pioneer start-up school, Disrupt University, which he set up in 2012.

Disrupt University has already created 800 start-up individuals through the 16 classes it has run to date, most of whom have gone on to influence and had an impact on the start-up ecosystem, as well as making changes in the large corporate businesses in which many of them work.

Ruangroj, known as “the start-up godfather” in Thailand, has been a speaker at a number of global start-up and innovation conferences this year, such as the “Global Entrepreneurship Summit 2016”, held at Stanford University and at which he was invited to speak by the White House on behalf of US President Barack Obama; the “MIT Asia Business Conference 2016”; the “FinTech Festival 2016”, held by the Monetary Authority of Singapore; and the “Guangzhou International Innovation Conference 2016”.

Moreover, he initiated the most active start-up accelerator programme in Thailand, dtac accelerate, which he also ran during the first two years following its inception in 2013.

Finding that only Thailand among the larger economies in Southeast Asia did not have “unicorn” start-ups – that is, those with a company value of at least $1 billion – Natavudh and Ruangroj’s joint dream since 500 TukTuks was set up in 2015 has been to drive the Kingdom to be at the forefront of the new economic world in the future, one that is led by innovation and disrupted by start-ups.

They joined forces to establish the venture-capital fund in partnership with 500 Startups, the major US-based global venture-capital seed fund and start-up accelerator, which manages $200 million in assets and has invested in over 1,300 technology start-ups since the beginning of last year.

In 2012, all the start-ups in Thailand raised combined funding of only $2 million, but in the first half of this year the funding figure was some $150 million, a level that is expected to reach $200 million by the year’s end – with Natavudh and Ruangroj playing their part in this rapid growth.

It is much too early, however, to measure the extent to which start-ups’ fund-raising will have a direct impact on the economy, as this will show up in the next five to 10 years when these businesses get bigger and the most successful among them launch initial public offerings (IPOs) in the Stock Exchange of Thailand.

“500 TukTuks invests in the early stage of start-ups and helps them to get the next level of fund-raising. Most of the start-ups in which we invest get more follow-on fund-raising and their businesses become larger. These start-ups will impact the country’s economy once they get series D or E funding, or when they get to the IPO stage,” Natavudh explained.

Ruangroj, meanwhile, believes Thailand will have large-size start-ups creating a big impact on the economy by 2020. “For example, Lazada [the Singapore-based e-commerce company] took four to five years to get to the stage of being valued at $1 billion,” he said.

Natavudh and Ruangroj’s goal is to create at least three Thai unicorn start-ups by the end of 2020 –companies that are not only successful, but also iconic.

They are also determined to help build up Thailand’s start-up ecosystem to the extent that is ranked in the world’s top 10 by 2025.

Thailand, he added, would need to emulate what has been achieved in Singapore, namely, having significant numbers of start-ups and unicorn start-ups; being a vibrant start-up ecosystem hub; and providing an attractive environment for start-up talent.

“We have to create the start-up ecosystem to help transform Thailand to digital in all aspects. If we do not do so, overseas start-ups will eventually arrive to disrupt all vertical business sectors.

“For example, GrabTaxi and Uber are able to disrupt transportation, while we [really only] have Ookbee, a Thai start-up, to disrupt publishing. We need to have Thai disruptors to disrupt our traditional business in each vertical sector, rather than be passive and allow overseas start-ups to disrupt us,” Natavudh stressed.

Ruangroj said 500 TukTuks invested in start-ups that empower the masses, enabling ordinary people to get access to services and products by creating or adding value on top.

For instance, the Skootar start-up empowers motorcyclist-messengers to generate 40-per-cent better income via the service, while another – Finnomena – empowers people who have only Bt10,000 to access wealth management.

Moreover, the company will raise its second tranche of capital, in the region of $50 million to $100 million, with the additional funds being used in 2018 across start-up fund-raising stages from seeding to series A and A+.

“We invest in start-up businesses that empower the masses, empower ordinary people. Start-ups pave the way forward for the country in uncharted territory.

“We are not trying to convince everyone to form a start-up business, but we want to convince people to help change the country in their own way, by adopting the start-up concept, start-up mindset and start-up practice.

Tags:
Businessman of the Year