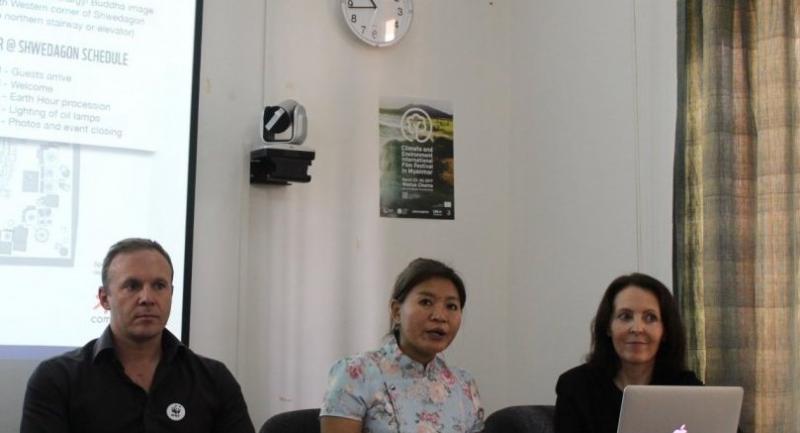 FOR THE FIRST time, Myanmar will join 172 other countries in taking action on climate change, with a public celebration of Earth Hour 2017 on March 25, according to the World Wide Fund for Nature (WWF), which is organising the campaign.

May Moe Wah, operations manager of WWF Myanmar, told a news conference yesterday that celebrities, diplomats, environmental organisations and volunteers would gather at the historic Shwedagon Pagoda to light 10,000 lamps from 8.30 to 9.30pm.

“We have received approval from Yangon Region Govern-ment, concerned ministries, the Shwedagon Pagoda’s board of trustees, and concerned administrative offices to celebrate the campaign in public,” she said.

May Moe Wah said WWF had received a lot of support from the relevant authorities and partner organisations including the Myanmar Climate Change Alliance, as they are also eager to raise awareness and mobilise citizens and communities to take urgent action on climate change.

The organisation is proud to bring the world’s largest grass-roots movement for the environment to the citizens of Myanmar, she said.

Earth Hour started as a symbolic lights-out event in Sydney, Australia, in 2007. On the 10th anniversary of Earth Hour, Yangon will join more than 7,000 cities all over the world.

She said the lighting of lamps at Shwedagon would also reflect the Buddhist tradition of lighting oil lamps at pagodas in the evening.

“Our theme is to raise awareness about climate change and how it shapes our daily life. We aim to remember those who have lost their lives during natural disasters caused by climate change. Through this campaign, we want to encourage all the citizens to participate in various climate actions,” May Moe Wah said.

Across Yangon, in the same hour, homes and businesses are encouraged to switch off non-essential lights, in a show of solidarity with millions of others concerned with the future of the planet.

The actions WWF Myanmar encourage include a transition to renewable energy, promoting sustainable food and agriculture, adopting climate-friendly legislation and raising awareness on climate issues in schools and among the public. Alison Harley, senior communications manager of WWF Myanmar, said the campaign would be supplemented by further activities.

She said a report on Myanmar climate change, “Assessing Climate Risk in Myanmar”, would be released next Tuesday and a climate and environment international film festival would be held at Waziya Cinema in Yangon from March 23-26.

The climate-change study was based on analyses of 19 observed weather stations. |New York-based Columbia University’s centre for climate-systems research, Myanmar’s Ministry of Natural Resources and Environmental Conserva-tion and the Department of Meteorology and Hydrology cooperated to conduct the report, she said.

Harley said addressing climate change required the proactive engagement of all sectors and a great number of institutions in society. An alliance is needed at the national and international levels, between and within the national and sub-national institutions and sectors, civil society, the private sector, and general society with the support of the development partners.

“Be part of history and join us in lighting 10,000 oil lamps to celebrate Myanmar’s first Earth Hour, pledging to do what we can, as individuals, to [tackle] climate change,” she said.