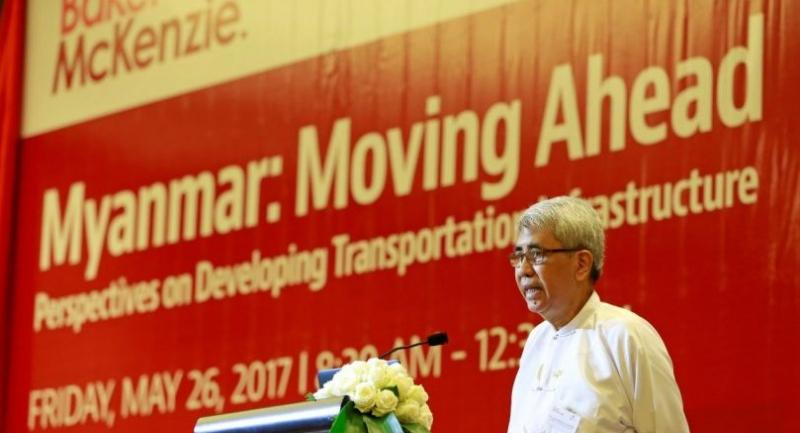 AS MYANMAR is striving for transportation sector reforms, public-private partnerships (PPP) in infrastructure projects would be highly encouraged to speed up the progress, according to a seminar entitled “Myanmar: Moving Ahead_ Perspectives on Developing Transportation Infrastructure” held on Friday.

Kyaw Myo, deputy minister for transportation and communications, said at Myanmar’s first transportation conference the country would focus not only on developing infrastructure but also on implementing reforms as recommended by Asian Development Bank which has supported strengthening of transport sector policies in Myanmar.

He said Myanmar’s significant reforms included merging of the ministries related to transportation as a single Ministry of Transport, expanding transport networks to reduce transportation costs, improving water transport along the Ayeyarwady and the Chindwin rivers, and allowing private companies to manage Yangon and Mandalay international airports under the PPP scheme.

The deputy minister urged British and international investors to learn opportunities to invest in the nation’s transportation sector as the ministry strategically undertook reforms.

He said the national transportation master plan was approved by the Union cabinet in December 2014. According to the master plan, Myanmar’s transport network will be corridors-based by the implementation of 10 major transport corridors as a priority for rapid development.

According to Kyaw Myo, an ADB-funded comprehensive study has identified the present challenges Myanmar is facing in developing the transportation policy reforms. He also hinted at expansion of access from Yangon city centre to the airport.

“Now we are in the transition period with effective measures for long-term sustainable development,” he added, highlighting the role of private sector in the socioeconomic development of the nation.

Kyaw Myo also spoke about how transportation infrastructure is essential for Myanmar to create jobs and encourage trade with other countries.

Hosted by Baker McKenzie in collaboration with the British Chamber of Commerce, the event covered policies, PPP frameworks, concessions, financing, and structuring of various types of transportation projects such as rail, roads and ports.

Jo Daniels, managing partner of Baker McKenzie, said Myanmar must be flexible in its approach to public-private partnerships, as different forms of PPP may be better suited to different transportation projects.

“I would encourage the Myanmar government to not wait for a PPP law but instead begin promoting PPPs as a method of addressing the infrastructure gap in Myanmar,” she said.

She also discussed international best practices in PPP, including the need to conduct a rigorous feasibility study to select the most appropriate PPP model for a project.

Thomas Chan, who leads KPMG’s tax and regulatory practice in Myanmar, spoke about how common holding structures and some of the transportation projects can be funded with a view to subsequent repatriation of investments.

Martin David, principal of Baker McKenzie Wong & Leow in Singapore, stressed the need of a partnership that lasts over time and adapts to the rapidly changing economic landscape.

“I believe the government is now approaching the country’s infrastructure needs in the right way by investing time and effort to develop the right foundation upon which future infrastructure can develop in collaboration with the private sector,” he said.