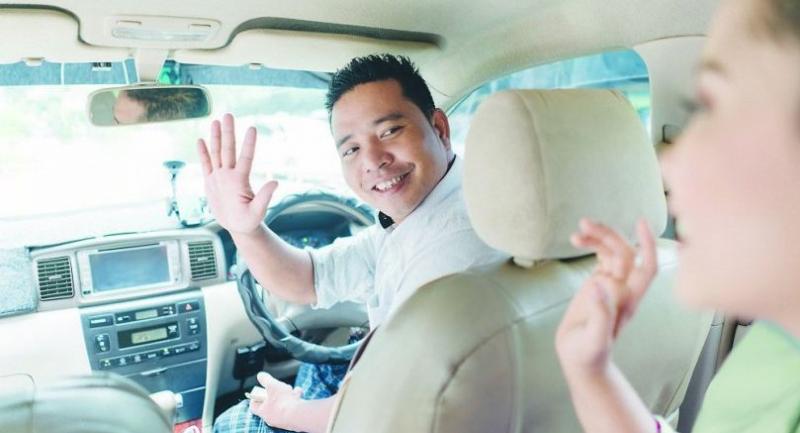 Taxi driver at a Grab event for partners in Yangon.

By Khine Kyaw
The Nation
YANGON

Grab, a leading ridehailing service provider in Southeast Asia, is making plans to continue as the market leader in Myanmar with its new offerings for passengers and driver-partners, according to Alvin Loh, the firm’s acting country manager for Myanmar.

Loh said in an interview that more and more passengers are enjoying ridehailing services operated by Grab’s growing base of drivers in Yangon, and the firm will continue to expand its services to more cities.

“Currently, we are focused on adding drivers and passengers to the platform, creating the best possible user experience and building new services,” he said.

“Our journey in Myanmar has been meaningful for us. We have grown so quickly in such a short period of time. All of this would not have been possible without the support of our passengers and the commitment of our driverpartners.”

According to Loh, the firm has enjoyed significant growth in Myanmar since it started appbased taxi services in Yangon in March 2017.

“When we launched our beta trial, ride-hailing and using smartphones to book taxis was still a relatively new concept in Yangon. However, we believed there was an opportunity to help improve taxi service standards in Myanmar and to bring more drivers into the digital economy. As a result, passengers came to enjoy the higher-quality service we provide,” he said.

He believes the firm will play a key role in driving financial inclusion in Myanmar, as many taxi drivers do not have bank accounts. In this regard, Grab has partnered with CB Bank and Wave Money to give its drivers access to financial services.

“In every market we are in, we make sure to really understand local market needs and build our products around those needs, instead of taking a cookie-cutter approach. This has really set us apart from other players,” he said.

As the first step of its expansion beyond Yangon, the firm launched in Mandalay its three-wheel ride-hailing service called Grab Thone Bane on May 14.

“We are already receiving a lot of positive feedback from our passengers during the beta trial phase, which reflects the huge potential we see for this service in Mandalay,” he said, adding that the firm will continue to support the transportation sector development in the two cities.

Loh said Grab will focus on improving the quality of the vehicles, driver service and safety standards for taxis in Yangon, and the three-wheel vehicle service in Mandalay.

In late March, Grab took over its rival Uber’s operations and assets in Southeast Asia, creating the largest-ever company of its kind in the region. As part of the acquisition, Uber will take a 27.5 per cent stake in Grab, and Dara Khosrowshahi, the former’s chief executive, has joined Grab’s management.

Loh says the merger will improve efficiencies and synergies in both platforms’ networks, providing more benefits to drivers and passengers.

“With the combined business, Grab will drive towards becoming No 1 online-to-offline mobile platform in Southeast Asia and a major player in food delivery,” he said.

Loh is confident that Myanmar is well-positioned to leapfrog other frontier markets, citing Grab’s last year announcement to invest US$100 million (Bt3.3 billion) in its nationwide expansion over the next three years. Plans for the future include strengthening their presence in other cities, working with corporates, enabling cashless transactions through GrabPay and investing in local talents.

Additionally, the firm will continue to work with the driver community in Yangon to improve their lives with increased passenger bookings and income as well as to offer training.

Last week, Grab introduced its “Better 365” scheme, which includes a platinum driver programme for top performers, an inapp Grab Benefits programme for all drivers, and weekฌly incentives for good performance. It will award up to 50 cash bursaries ranging from 50,000 to 100,000 kyats (Bt1,168 to Bt2,336) each, depending on the number of distinctions achieved by family members of its drivers in the recent matriculation examination.

It also in May launched Grab Rewards, Myanmar’s first loyalty proฌgramme to give passengers reward points to redeem special discounts and benefits in several categories including food and beverage, travel, services, shopping and entertainment.

Loh foresees high potential for growth of business rides in the future, as Grab offers a complimentary service to provide companies with a seamless way to manage their employees’ transport spending.

Since its beta trial in November 2017, more than 100 companies in Myanmar have signed up for Grab for Business. Most are highperforming private companies in different sectors including fastmoving consumer goods, professional services and media, Loh said.

“The feedback from these companies has been positive – some of the larger companies are considering reducing their own fleet of cars in favour of Grab for Business,” he said.

Loh added the service addressed common problems faced by companies in Myanmar, such as the inability to keep track of employees’ rides, the lack of receipts, faded receipts, price haggling, price certainty and safety.