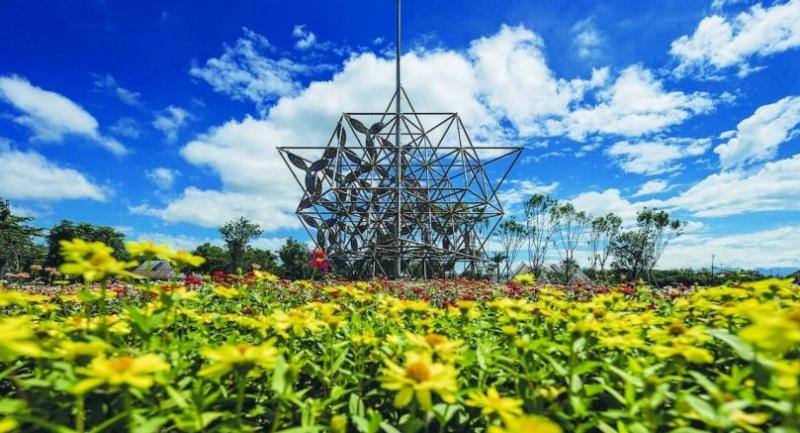 A view of Walpu Park in Taichung city, one of the three areas of the 2018 Taichung World Flora Exposition.

Thai Vietjet Air will inaugurate its Bangkok-Taichung direct flights on November 3, on the same day as the opening of the 2018 Taichung World Flora Exposition in the Taiwanese city. The twin events aim to attract up to 8 million visitors, according to the Tourism and Travel Bureau, Taichung City Government.

Thai Vietjet in cooperation with the Tourism and Travel Bureau in Taichung, will offer free tickets to the first 10,000 customers booking seats on the new flights to the flora exposition, from November 3 onwards.

Thai Vietjet expects up to 3,600 Thai tourists flying to Taichung on the direct flights monthly, according to Tony.

“We hope the 2018 Taichung World Flora Exposition, along with the start of the BangkokTaichung direct flights, will boost tourism exchange between the two countries,” says Tsao ChungYu, Senior Executive Officer, Taichung

The total number of inbound visitors to Taichung stood at 1.32 million last year, a 7.03 per cent increase from the previous year. From January to July this year, up to 40,844 Thai tourists arrived in Taichung, rising 27.72 per cent from the same period last year, according to Tsao.

There were 54,671 Thai tourists visiting Taichung in 2017. With the Thai Vietjet direct flights and the World Flora Exposition, we expect a 200per cent surge in the number of Thai tourist arrivals in Taichung this year, he added.

For example, the Fongyuan Huludun Park under the theme of ‘Flora City’, aims to display the incorporation of historic and commercial facets, including a ‘Garden Competition Area’ and a ‘Water Features Area’.

“Taiwanese and Thai cultures have many similarities, making Taichung an attractive location for Thai tourists. We would gladly welcome Thai tourists to the flora exposition and have produced leaflets in Thai,” said Tsao.

The Taichung City Government has set a budget of NT$8.6 billion (Bt9.07 billion) for the 2018 Taichung World Flora Exposition, while expecting NT$30.3 billion (Bt 31.98 billion) in total revenue from the event, according to Tsao.

Taichung is located on the western side of central Taiwan. It occupies 2,215 square kilometres with a population of 2.7 million. The city's main tourist attractions include the Fengjia Night Market, Gaomei Wetlands and the Lihpao Land theme park.