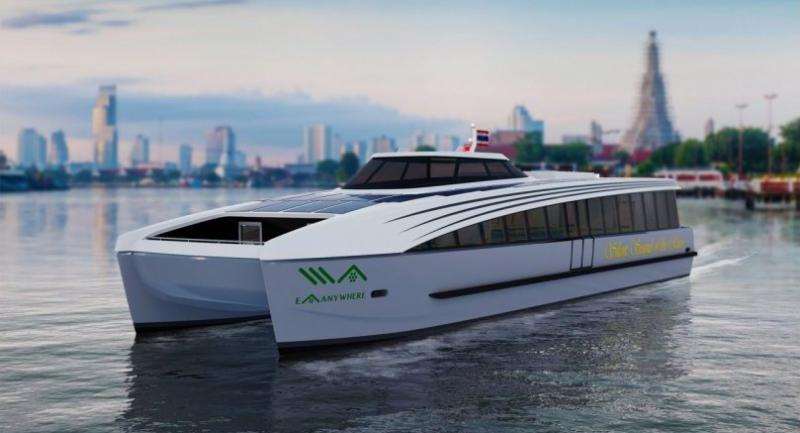 ELECTRIC ferries will ply the Chao Phraya River under a Bt1 billion project to transform Bangkok into the “Venice of the East” and help ease the capital’s smog.

The project is backed by Energy Absolute Plc (EA), a Thai alternative energy technology provider, which yesterday said it will work with the Marine Department to introduce the service. The partners are hailing the project as a smart transport initiative.
Amorn Sapthaweekul, director and deputy chief executive officer of Energy Absolute, said the electric ferries, under the pilot stage of the project, will be on the river by the end of this year. The service will be operated by EA and its subsidiary Energy Mahanakorn Co Ltd, which will be in charge of manufacturing the EA Anywhere-branded charging stations for the vessels.
“We pride ourselves on being Thailand's leading innovative alternative energy company, focusing on delivering cutting-edge technology and environmental friendly solutions for better living,” said Amorn.
“Today marks a significant milestone as we launch the first 100-per cent Thai electric ferry prototype to be opened by the end of 2019. It aims to transform Thailand into a truly smart transport country, improving the standard of urban living quality and reducing pollution.”
Amorn said that after the introduction of the Thai-owned electric car, badged MINE Mobility in March last year, EA has expanded the use of its battery technology with the planned launch of electric ferries.
The vessels will run from the Nonthaburi Pier to Wat Rajsingkorn Pier. The 20km stretch of river will be covered in less than 40 minutes.
“We plan to build 54 electric boats at an investment of Bt1 billion. The transport service with the electric boats will start at the end of this year and all 54 boats will be fully operational by February next year,” said Amorn.
“What we want to do is to transform Bangkok into the Venice of the East with this smart transport initiative. We want to lift the quality of life for the urban consumers in Bangkok and reduce the city pollution caused by PM2.5,” he said, adding that the company will expand its electric ferry service to other destinations, as well as to other transport platforms.
“River transport can be used as another jigsaw connecting to the Bangkok Metropolitan Administration’s entire public transportation network of electrical vehicles. The electric ferry project will return a good liveable city to the people of Bangkok, which is one of the most important tourism destinations in the country,” said Amorn.
The ferries, which are designed by EA, are being produced by a local supplier for the company under a subcontracting arrangement.
The ferries will run with electric energy supplied by a battery with a capacity of 800 kilowatt hours. The boats, 24 metres long by 7 metres across, will use battery technology developed by EA. They can hold about 200 passengers.
EA plans to set up a battery manufacturing plant in Chachoengsao for its electric vehicle projects.