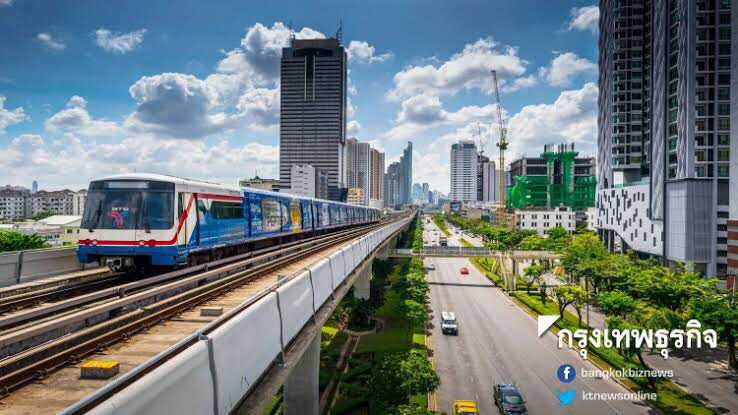 The Bangkok Metropolitan Administration will negotiate with the Bangkok Mass Transit System (BTS) to shoulder the cost of construction of two extended BTS Skytrain routes worth Bt100 billion in exchange for the extension of its license for 30 years, a senior official said.

Manit Techa-apichoke, president of BMA-owned Krungthep Thanakhom Co Ltd, said the state firm was empowered by Article 44 of the interim charter to conduct negotiations with the BTS over the Bt100 billion debt transfer and concession extension.
Manit said the negotiation should be completed in about two months.
If the BTS agrees to shoulder the cost of construction of the two extended routes plus accrued interest worth Bt100 billion, the BMA will grant a new 30-year concession for the main routes and all extended routes. The debt covers the construction cost of the northern route of Morchit-Saphan Mai-Khukot extension and the southern route or Bearing-Samut Prakan extension.
If negotiations are successful, the concession for the main routes from Mor Chit to On Nuj and the National Stadium to Tak Sin Bridge, which will end in 2029, will be extended to 2059, Manit said.
And the contract for hiring the BTS to operate two extended routes from On Nuj to Bearing and from Taksin Bridge to Bang Wa, which will expire in 2042, will also be extended to 2059, Manit said. The BMA has paid for the construction cost of these two routes and hired the BTS to operate the extended routes.
The concession for operating the Bearing-Samut Prakan extension and Morchit-Saphan Mai-Khukot extension will also run to 2059, he added.
Manit said the BTS would be asked to shoulder the cost of construction of the Morchit-Saphan Mai-Khukot route and Bearing-Samut Prakan route, which have been built by the Mass Rapid Transit Authority of Thailand (MRTA). The MRTA has built the elevated railways for the two routes and will require the BMA to pay for the construction cost while the BMA will in turn ask the BTS to shoulder the cost.
On Monday, Manit and Surachet Laopoolsuk, deputy governor of MRTA, witnessed the test-run of a BTS Skytrain for one station on the extended Morchit-Saphan Mai-Khukot route. The test-run ended at the Lat Phrao Intersection station.
Surachet said the MRTA has finished the construction of the elevated railway and that Krungthep Thanakhom and BTS started installing the electric and train controls system in March.
Surachet said the Skytrain service to the Lat Prao Intersection service would be available from August 11 in a free test-run period and it will be extended to the Kasetsat University Intersection in December. The entire route service to Khukot will be operational in late 2020, he added.
Surachet said before the BMA could provide the test-run service to the Lat Phrao Intersection, it must first sign a memorandum of understanding to take up the cost of construction of the Morchit-Khukot route for Bt26 billion. The MRTA will ask its board on July 25 to approve the debt transfer to the BMA, Surachet added.
Manit said the BMA would also ask BTS to limit the fare to Bt65 and the BMA would find an appropriate model to subsidise the fare for the BTS.
Meanwhile, Surapong Laoha-Unya, BTS executive director, said it would be difficult to accept the BMA’s demand for the BTS to shoulder the construction cost and at the same time limit the ceiling of the fare of the entire route at Bt65 without a state subsidy.