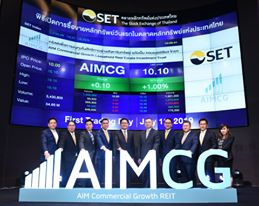 AIMCG, a REIT management company, on Friday debuted on the Stock Exchange of Thailand.

In a press release on Friday, the company said it is expected to provide decent long-term returns, given the “excellent quality” of its three initial investment assets of lifestyle malls with high occupancy rates. Its first-year distribution payment is estimated at 8 per cent.
Amorn Chulaluksananukul, the CEO of AIM Group, the independent REIT manager company, speaking as the settlor and manager of AIM Commercial Growth Leasehold Real Estate Investment Trust (AIMCG), said he is confident that the great quality of the three lifestyle malls will produce decent returns.
AIMCG’s initial assets, valued at up to Bt2.88 billion in total, include commercial leasehold interests in UD Town (Udon Thani), Porto Chino (outbound lane of Rama 2 Road in Samut Sakhon) and 72 Courtyard (in the Thonglor-Soi Sukhumvit 55 area). They are lifestyle malls with great potential and unique characteristics, said the release.
Charasrit A Voravudhi, the managing director of AIM Group, said each of the three properties offered sheer quality, unique concepts and location advantages in Bangkok or in an economically important city. He highlighted UD Town’s position as Udon Thani’s largest lifestyle mall and prominent landmark, as well as the project’s location in the city’s core business district and its popularity among the locals, people of neighbouring provinces and Lao tourists. Developed and managed by Udon Plaza Co, an experienced property developer and manager equipped with deep insights into customer behaviour, UD Town posted an approximately 97 per cent average occupancy rate over the past three years and welcomed 20,000-50,000 visitors per day, he said.
Developed and managed by D-Land Properties Co and built as a “neighbourhood mall”, Porto Chino is Samut Sakhon’s first and largest lifestyle mall. It is located on the outbound lane of Rama 2 Road, as a rest area popular among westbound and southbound travellers as well as a food oasis featuring leading brands. The Food Port area is going to be renovated and local well-known restaurants will be added to serve neighbouring residences and locals. Its average occupancy rate stood at approximately 84 per cent for the past three years, and seen 4,000-10,000 visitors daily.
The 72 Courtyard project was developed by Membership Co and is situated in the heart of the prime Thonglor-Soi Sukhumvit 55 area frequented by high-end customers. It offers a unique mix of restaurants and bars that are open day and night. The average occupancy rate reached 100 per cent over the past three years, and its visitors totalled 300-1,500 per day, said Charasrit.