Growth in value-addition of Thailand's ICT sector as a share of GDP was negative, but Thailand is among the top 10 countries having high value-addition in ICT manufacturing, according to a UN agency report.

UN calls for wider share of digital benefits dominated by US, China

Global value-addition in the ICT sector has not kept pace with overall GDP growth, the Digital Economy Report 2019 released recently by the United Nations Conference on Trade and Development (UNCTAD) said.

Despite the increase in access to ICTs over time, the share of this sector’s value-addition in world GDP has remained stable over the past decade, averaging around 4.5 per cent, the report said.

Global ICT manufacturing is highly concentrated, according to UNCTAD. Thailand, however, was among the top 10 economies that accounted for as much as 93 per cent of this subsector’s global value-addition.

Thailand was also in the top 10 countries which had high value-addition in ICT manufacturing as a share of GDP in 2017, the report said.

Looking at value-addition growth in the ICT sector by subsector, among developing countries and transition economies UNCTAD found that computer services displayed the highest average annual growth rate between 2010 and 2017, surging by an average rate of 8 per cent. In comparison, manufacturing grew by only 1 per cent, and telecommunications registered no growth. While value-addition in telecommunications rose in 12 countries including Thailand, in computer services it rose in 20 of them including Thailand. And in manufacturing it rose in 14 countries but Thailand experienced negative growth. 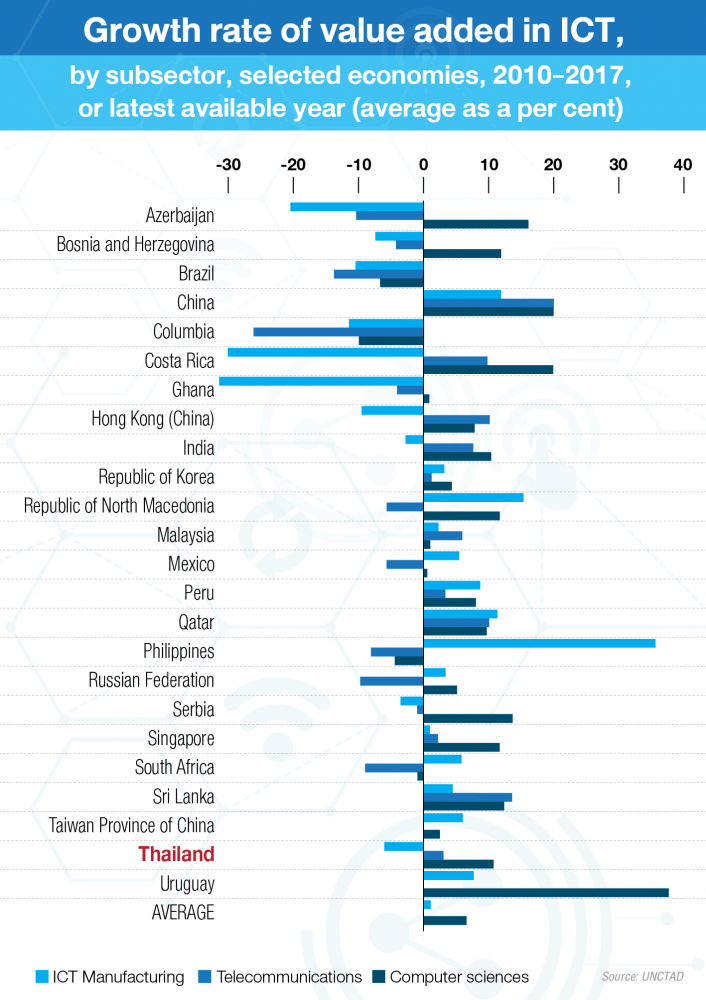