Among the key measures included in "Thailand Plus Package", a new package drawn up to attract foreign investment, is the easing of procedure for foreign investors in applying for visa and work permit.

Citing a Cabinet decision on September 10 approving the new measures, Phalang Pracharat spokesman Kobsak Pootrakool said under the new package, foreign investors could deduct cost for career training in the field of advanced-technology field by 250 per cent from 200 per cent, effective immediately until the end of next year.

Kobsak, in his capacity as secretary of the Council of Economic Ministers, said new hiring of Thai employees with special skills by foreign employers in the four fields under STEM educational doctrine - science, technology, engineering and mathematics - could enjoy 150 per cent corporate tax deduction from now until the end of 2020.

He said foreign companies in the field of high technology, such as Microsoft, Huawei, IBM and Google, would soon be expanding their business and starting new operations in Thailand.

Foreigners wanting to found or operate high-quality educational institutes or schools in the country are entitled to financial assistance under a government directive.

The directive, launched two years ago under the supervision of the Education Ministry, will soon come under the charge of a new division, being set up to regulate the operations of educational institutes by foreign investors. Ministers also approved 50 per cent cut of corporate tax for investors who invest Bt1 billion or more  within  2021 and apply for tax privileges within next year. The big tax cut will be offered for five years period and it is on top of current tax exemption for eight years.

The package was proposed by the Finance Ministry and the Board of Investment of Thailand. Thailand currently ranks fourth place in Asean for foreign direct investment, according to BoI. 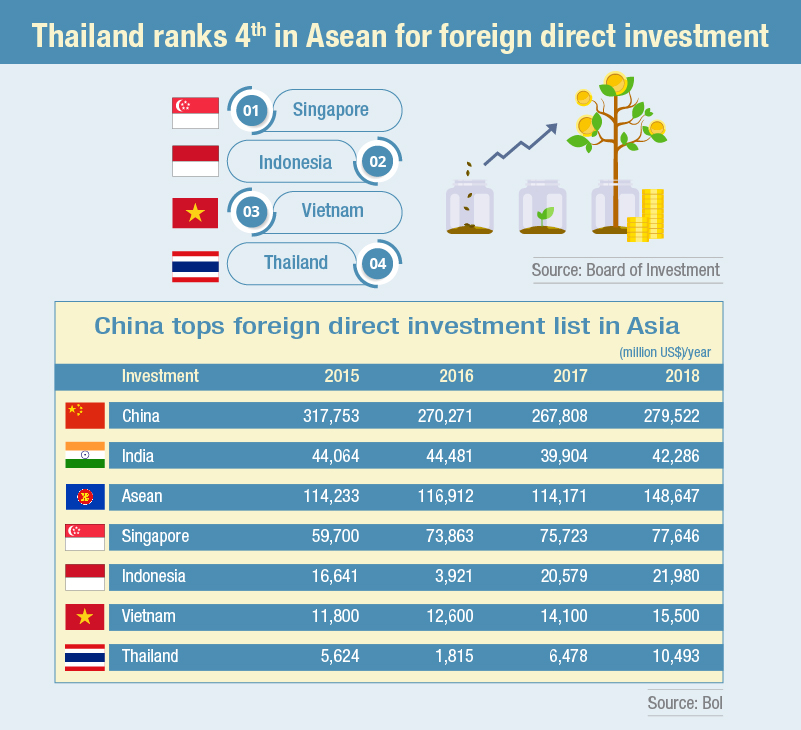 Kobsak said the Cabinet expected the new measures to draw more than 5,000 new foreign companies applying for investment in Thailand with 40,000 Thai employees benefiting from the new conditions.

Explaining "Ease of Doing Business", Kobsak said the package aimed to ease the complicated and time-consuming paperwork of an immigration protocol known as Tor Mor 30, which has drawn negative comments from both expatriates and foreign investors.