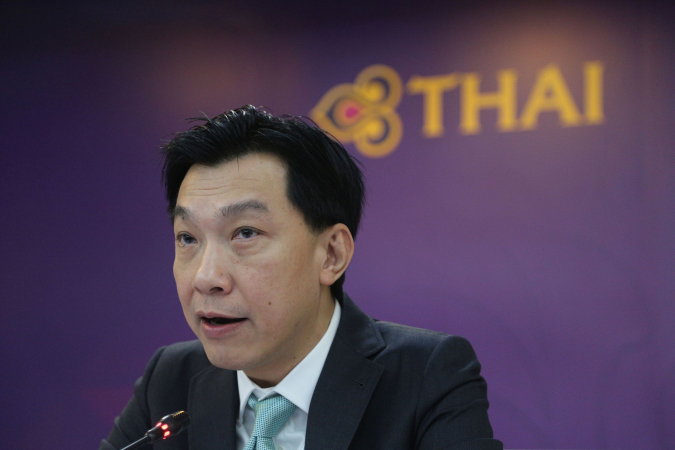 The national flagship carrier Thai Airways International (THAI) has denied reports that it is experiencing a liquidity crunch.

THAI president Sumeth Damrongchaitham said on October 4 that THAI has sufficient cash flow for present and future operations. He denied reports that THAI is in trouble and experiencing a liquidity shortage.

Sumeth added that the management has given top priority to maintaining liquidity and has drawn up a loans plan on the most prudential basis.

As of the end of June this year, THAI’s revolving credit line accounted for 13.4 per cent of the total projected revenue for the year. This indicated that the carrier still has adequate cash reserve in hand, he said.

He also assured customers, trading partners, shareholders, related parties and the general public that THAI is not in a liquidity crunch.

This week Deputy Transport Minister Thaworn Senniam said he will hold a meeting with THAI management on October 10 to seek ways to clear the national carrier’s accumulated losses.

The minister said the meeting will discuss THAI’s existing rehabilitation plan, which he does not believe will help the carrier succeed in a turnaround.

Thaworn said the rehabilitation plan had been implemented for a while now, but there was still no sign of the losses easing.

He believes THAI will first have to revise the rehabilitation plan within three months.

THAI directors on September 24 asked executives of the national carrier to review plans to procure 38 more aircraft worth a combined Bt156 billion.

The board of directors cited a “fast-changing situation” in asking for a fresh plan within the next six months.

Recently Sumeth said that THAI operations will not be affected by its board’s demand for the review of plans to procure the new aircraft.

According to the THAI second-quarter 2019 filing to the Stock Exchange of Thailand, the airline and its subsidiaries had total revenue of Bt42.509 billion, a 10 per cent decrease year on year.

For the second quarter THAI and its subsidiaries had one-time expenses that included impairment loss of assets and aircraft in the amount of Bt172 million. The gain on foreign currency exchange was Bt522 million, mainly from balance sheet revaluation. Consequently, THAI and its subsidiaries reported the net loss of Bt6.878 billion, compared to the loss of Bt3.086 billion over the same period last year.

Related story: THAI could lease rather than purchase more aircraft