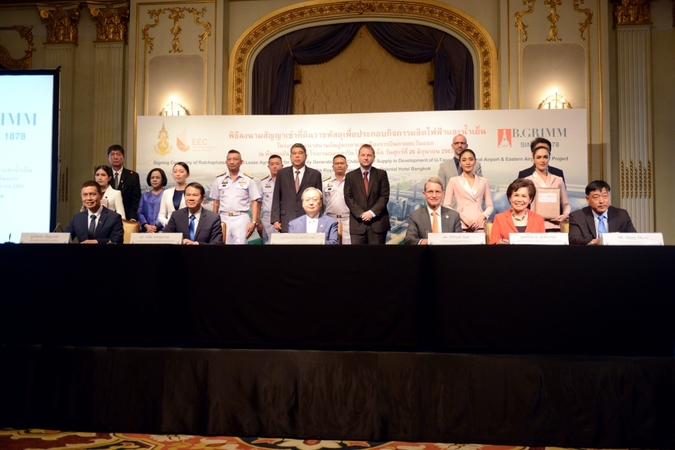 The Eastern Economic Corridor Office (EECO) and BGrimm Power Public Co Ltd signed a lease for 100 rai of state land on Friday (June 26) for the production of electricity and chilled water for U-Tapao Airport and the Eastern Airport City’s cooling system.

The development of the utilities system will prepare the area for expansion in passenger, logistics and aviation businesses, in line with the vision of EEC becoming a centre for e-commerce and technological hub for aviation.

The electricity will be produced using a hybrid system from a co-generation power plant using natural gas and solar farm in line with EEC’s key guiding concept of clean energy sources.

The system’s capacity will be 95 megawatts with a smart energy storage system of 50MW, and an option for expansion if the airport needs more electricity.

Harald Link, chairman of BGrimm, said the company was delighted to sign the lease to carry out the electricity and chilled water production projects for the airport and the airport city, both of which are immensely important for the development of the EEC.

Preeyanart Soontornwata, president of BGRIM, said the company was more than ready to start work on the projects immediately, adding that the hybrid electricity generation system should be ready for operation in 2024. This will be one of the largest hybrid power plants in the world that efficiently uses three systems to generate power, she added.