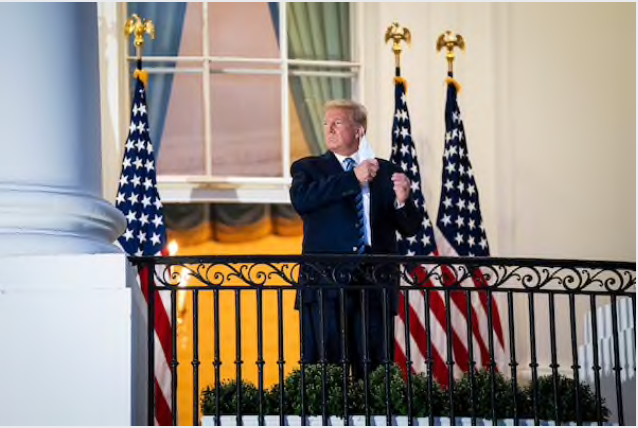 President Donald Trump watches Marine One from the Truman Balcony on Monday, Oct. 5, 2020, as he returns to the White House after receiving treatments for covid-19. MUST CREDIT: Washington Post photo by Jabin Botsford

WASHINGTON - President Donald Trump's surprise move Tuesday to shut down all negotiations on another big relief package until after the Nov. 3 election threatens to stall the U.S. economic recovery - or even trigger a backslide.

Many economists and business leaders were quick to dub the move disheartening and irresponsible. The stock market immediately sold off after the news, with the Dow Jones industrial average ending the day 376 points down. Companies from airlines to energy firms to restaurants have warned in recent days that they will have to undertake massive layoffs without more government aid. At least 75,000 layoffs were announced by major corporations at the end of last week alone, and Boeing has sharply pulled back its forecasts for airplane sales for years.

In short, the U.S. economy is about half recovered, meaning there is still a long way to go. For weeks, economists and business leaders have warned that the next phase of the recovery will likely be harder and it would be a huge mistake for politicians to think their job is done.

Even some right-leaning economists were calling for stimulus.

"If there isn't more stimulus, the recovery is in danger of collapsing. It's that simple," said Peter Morici, an economist and emeritus business professor at the University of Maryland who has supported Trump's reelection. "Waiting until after the election is waiting too long."

There's growing concern among economists about a downward spiral. As businesses cut more jobs, people have less money to spend, which means they buy less at stores, restaurants and other companies, putting those businesses and workers at risk.

Trump has tried to portray this recovery as a rapid bounceback - a "super V" shape when considered on a line chart - but there's growing fear it could turn into more of a "W" shape with a second dip if layoffs and business closures escalate in the coming weeks.

"Corporations were holding off on laying off employees in the hopes of further stimulus," said Peter Atwater, an adjunct lecturer in economics at the College of William & Mary. "With this afternoon's news, I expect that we will see businesses capitulate and begin to announce large scale layoffs."

This new wave of layoffs will add more to the ranks of the 26 million Americans who were receiving unemployment compensation. Many unemployed people say they no longer have enough money to pay for rent, cars, utilities or even food. The average unemployment-benefit payment fell from $900 a week to just over $300 at the end of July, a sharp reduction that makes it hard for many families to survive. As these people stop paying renting and car payments, it hurts landlords, firms and banks waiting for the money.

Hours before Trump's tweet, Federal Reserve Chair Jerome Powell urged Congress to act quickly and go big on more aid, saying the risk was far greater of backsliding for inaction than doing too much.

"Too little support would lead to a weak recovery, creating unnecessary hardship for households and businesses," Powell said at an event hosted by the National Association for Business Economics.

These fears are growing as the United States tries to contain the novel coronavirus, which causes the deadly illness covid-19. More than two dozen states have reported increases in cases in recent days. As case counts rise, people typically stay home and curtail spending. Rose and Sparrow Salon, a top rated hair salon in the District of Columbia, has seen a pickup in cancellations as people worry about venturing out, said owner Amie Adkins.

Trump tweeted that "the Stock Market is at record levels, JOBS and unemployment also coming back in record numbers," but the reality is that about half the jobs lost in the spring, during the initial spike of the public health crisis, have returned.

Economists have warned for weeks that jobs that have returned are the low-hanging fruit and getting the rest of the jobs back will be more difficult, much like running the second half of a marathon.

Trump's own treasury secretary, Steven Mnuchin, told Congress during a recent hearing that another round of stimulus was needed for small businesses and the unemployed.

Mnuchin and House Speaker Nancy Pelosi, D-Calif., were close to a deal for over $1.6 trillion in aid. The major disagreements were over how much help to give cash-strapped states, cities and the unemployed, but many felt a deal was within reach.

The momentum in negotiations came after the September jobs report. Permanent job losses are rising as people have been out of work for half a year. While the nation did add jobs in September, the gains were the slowest since the recovery and nearly a quarter of restaurant and hospitality jobs remain wiped out. State government and the education sector lost jobs in September, a red flag of what lies ahead for many states, cities and municipalities are running low on funding.

Fred Warf runs a small barbershop and salon called Hair FX in Chicago with his wife. Like many small business owners, he was really hoping for another round of government grants or loans like the Paycheck Protection Program that went to more than 5 million businesses.

Warf did receive a loan over the summer, but that money is long gone. He has been able to reopen, but like many "high contact" businesses, it's nothing like before. Some clients still have not returned. His costs are up for all the protective gear and cleaning that he has to do in between clients. And a lot of people are still on edge. The business staff is down to him and his wife, but he's still struggling to pay his landlord.

"My business has to change to make profitability, but what else can we cut?" said Warf, who is 62. "This was supposed to be my golden years to make money and it certainly is not."

Warf says he's staying in business largely because of his blue-collar clients. They still have to go to work in factories and warehouses, and they are willing to come in for regular haircuts. Yet, many of his white-collar Chicago office workers are "leery" to come in. As winter approaches, he's worried about whether he can make it without more aid or more customers coming back.

The National Restaurant Association warned that 40% of restaurants are in danger of closing in the next six months without more aid. The American Hotel & Lodging Association warned thousands of hotels can't pay toward their mortgages right now, putting them in danger of closing. Overall, 21% of small business warn that they will have to shut permanently if something doesn't change in the next six months, according to a National Federation of Independent Business survey in August.

Economists, including those at the Fed, have built more government stimulus into their projections about the economic recovery. Without it, they warn the economy is likely to sputter again or even backslide.

"My forecast is, it may take until the end of 2021 to recover all of the economic output losses and three years to recover all the job losses," said Lynn Reaser, chief economist at the Fermanian Business & Economic Institute at Point Loma Nazarene University. But she predicted a sharp "drop in economic activity" without more government stimulus.

Trump risks the nation backsliding economically, putting more jobs and business in danger of going away. He wanted a V-shaped recovery, but a W is looking more likely.