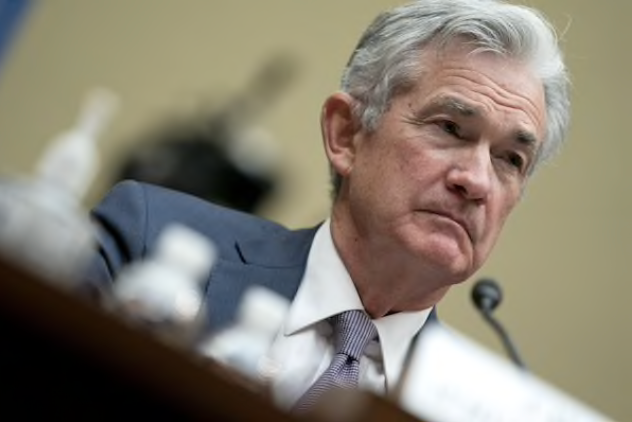 Jerome Powell, chairman of the U.S. Federal Reserve, listens during a House Select Subcommittee hearing in Washington, on Sept. 23, 2020. MUST CREDIT: Bloomberg photo by Stefani Reynolds.

A victory for Joe Biden in the U.S. presidential election may eventually reshape the Federal Reserve's leadership and the way it regulates big banks, but it won't change what matters most for financial markets and the economy: monetary policy.

With the economy struggling to regain its pre-pandemic strength, Fed officials have telegraphed clearly that interest rates will stay near zero for at least three more years. Moreover, in August the Fed's rate-setting panel unanimously endorsed a new long-run strategy that promises to keep rates lower coming out of this recession than officials had dared during previous recoveries.

That strategy won't change. On Thursday, Fed officials voted once again to hold rates at rock-bottom levels for the foreseeable future as risks to the economy remain elevated.

"We are committed to using our full range of tools to support the economy and to help assure that the recovery from this difficult period will be as robust as possible," Chair Jerome Powell told reporters after the Fed's decision. A divided Congress through at least the end of this year means Powell will keep calling on lawmakers to reach a deal on more fiscal support, especially for those out of work. He sounded hopeful during the press conference on the prospects for more aid, noting that "plenty of people on Capitol Hill" see the need for more action.

Biden can remake the Fed's leadership by 2022. By then, Powell's term -- as well as the terms of both vice chairs -- will expire.

Powell's fate under Biden is difficult to predict. In a recent survey of economists, 57% said they expected a President Biden would offer him another four-year term. Powell hasn't said whether he would accept another term if asked to stay.

The chair has earned a high degree of respect from both sides of the political aisle, first for how he handled President Donald Trump's attacks on the Fed for much of the past four years, and second for how he managed the Fed's response to the pandemic. Biden certainly will be pleased with the Fed's pledge to provide as much monetary policy as is needed.

But the new president could come under pressure from some in his party to pick a Democrat. For most of the last 50 years, presidents have reappointed first-term chairs chosen by their predecessor. Trump broke with that when he dumped former Chair Janet Yellen in 2018 in favor of Powell, a Republican and then a Fed governor. Powell was appointed to the Fed in 2012 by President Barack Obama.

Extra pressure will come from Democrats displeased by the Fed's steady push to soften some of the regulatory reforms introduced following the global financial crisis with the 2010 Dodd-Frank Act.

At the least, Biden is expected by economists who follow the Fed to replace Randal Quarles, the vice chair in charge of banking supervision. His term expires in October 2021.

The other vice chair belongs to Richard Clarida, the Fed's highest ranking Ph.D., whose term runs through September 2022.

Biden is already being lobbied by some groups to use appointments to improve diversity at the Fed, which has traditionally been dominated by White men, notwithstanding Yellen's four-year term. There are also currently two vacant Fed board seats, and possibly a third if Biden, as some expect, makes Fed Governor Lael Brainard his Treasury secretary. Already a strong candidate for the job four years ago had Democrat Hillary Clinton defeated Trump, Brainard looks even stronger now, given that close coordination between the Fed and Treasury may prove crucial in helping the economy recover from the pandemic-induced recession.

Trump failed multiple times to fill those vacant Fed seats when he couldn't convince enough Republican senators to back his nominees. His most recent selections -- Judy Shelton and Christopher Waller -- are unlikely to be approved in the lame-duck session following the election, and their nominations will expire when the current Congress adjourns at the end of the year.

Biden's economic team also wants the Fed to focus more on racial inequality in the economy. Democrats in Congress have introduced legislation to add that goal to the Fed's existing mandate for price stability and maximum employment. This could have implications for the central bank if a Biden administration decided to endorse it.

But Powell and his colleagues have repeatedly addressed this topic themselves, particularly since Black Lives Matter protests swept through the nation earlier this year. Importantly, their new strategy introduced in August explicitly promises more patience in raising interest rates than in the past to push the benefits of a tight labor market deeper into minority communities.

No matter what changes Biden introduces, the public relationship between the White House and Fed is widely expected to improve. The days of the president calling the Fed chair an "enemy" are likely soon over.