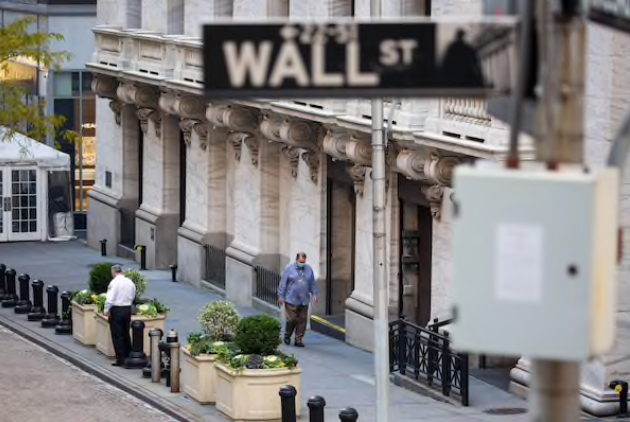 A person wearing a protective mask passes in front of the New York Stock Exchange in New York on Nov. 9, 2020. MUST CREDIT: Bloomberg photo by Michael Nagle.

Money managers cherish the role of contrarian, trendsetter and freethinker -- even if it's in words more than deeds. Ask 10 managers an investment question and you're likely to get 10 different answers.

So during the rare moments when they agree, it's worth paying attention. And right now there's widespread agreement on this question: Which investment will perform better over the next several years, U.S. or foreign stocks? The answer isn't in dispute, and it's not the U.S.

Big asset managers such as BlackRock Inc., Vanguard Group and JPMorgan Asset Management, and even some smaller ones, spend a lot of time trying to estimate future returns from stocks, bonds and other investments. Those estimates - capital market assumptions in industry jargon - are crucial inputs in the financial plans and investment portfolios they deliver to clients. They're also handy for managing investors' expectations.

Coming up with those estimates isn't easy. As investors are constantly warned, when it comes to markets it's not safe merely to assume that the past is a roadmap to the future. Instead, capital market assumptions require thoughtful, detailed judgments about the variables that drive investment returns. For stocks, that means at a minimum, estimates around future dividend yields, corporate earnings growth and changes in stock valuations.

Given the guesswork involved, there's often lots of disagreement about which investments are likely to be the best performers, which is why the current consensus that foreign stocks will outpace those in the U.S. is so unusual. BlackRock, for example, estimates that U.S. stocks will produce a return of 5.8% a year over the next 10 years, compared with 7.1% for European stocks and 7.3% for emerging markets. Vanguard estimates that U.S. stocks will deliver a return in the range of 3.9% to 5.9% a year over the next 10 years, while foreign stocks will generate a return closer to 7.4% to 9.4%. JPMorgan and UBS, to name two others, agree that more value lies overseas. In fact, it's hard to find publicly available capital market assumptions that favor the U.S.

That consensus makes sense when you unpack the three main drivers of stock returns. First, dividend yields are generally higher outside the U.S. Second, covid-19 has dampened business prospects around the world, so the jaw-dropping earnings growth generated by U.S. companies in recent years - and which propelled U.S. stocks past foreign markets during the last decade - is unlikely to return anytime soon. Third, and probably most important, valuations are considerably lower outside the U.S. By any measure, the U.S. stock market is as richly valued as it has ever been, or close to it, so valuations are unlikely to rise meaningfully from current levels. Meanwhile, many foreign stock markets are trading near or below their historical average valuations so there is considerable room for them to rise and boost future returns.

And that may even be understating the potential impact of valuations. When they move from low to high and vice versa, they often overshoot. There are lots of historical examples. In the early 2000s, for instance, emerging-market stocks traded at depressed valuations; just a few years later in 2007, they were the priciest on record. More recently, the U.S. stock market traded well above its historical average valuation just before the 2008 financial crisis; by early 2009, U.S. equities had tumbled well below that average.

That tendency for wild swings in valuation is one reason some managers anticipate even starker outcomes for U.S. and foreign stocks. Boston-based money manager GMO, whose forecasts are widely followed, expects U.S. stocks to lag those in other developed countries by roughly 5 percentage points a year over the next seven years after taking inflation into account. And it estimates the margin could be as high as 15 percentage points a year relative to emerging-market stocks.

All of which raises another question: Given the widespread agreement that foreign stocks are the place to be, why isn't more money invested outside the U.S.? Of the assets in stock funds favored by ordinary investors, which includes exchange-traded funds and mutual fund share classes sold directly to individuals, roughly 74% are in U.S. stocks, according to Morningstar data. That's a big bias given that the U.S. accounts for about 58% of global stocks by market value and just 15% of global gross domestic product. It's even bigger considering the opportunity foreign markets present in this moment. Perhaps individual investors overestimate the importance of U.S. companies in the global context. Most have almost certainly never heard of capital market assumptions.

What's more surprising, though, is that professional investors favor the U.S. just as much. Of the assets in stock mutual funds favored by institutional investors and money managers, roughly 76% are in U.S. stocks. Some of the pros undoubtedly suffer from the same biases that afflict ordinary investors, but there's a more powerful force driving them: career risk. As any seasoned money manager will tell you, the quickest way to get fired is to fall behind a runaway U.S. stock market. And the best way to avoid that ruinous outcome is to cozy up to U.S. stocks.

Indeed, managers who have cut back on U.S. stocks in recent years have paid a price. GMO is one of them. In a recent note, it acknowledged that, "our underweight to U.S. equities, and our overweight to EM equities have not worked as we had hoped, as expensive assets have gotten more expensive and cheap assets have gotten cheaper." The result: "clients are losing patience." GMO likens the experience to 1999, when it was "fired, ridiculed, and pilloried in the financial press" for its faithful adherence to value investing during the height of the dot-com mania.

That doesn't mean foreign stocks are a surefire bet. And even if the consensus proves to be right, there's no way to know when fortune will begin to favor foreign stocks. So it's not smart to abandon the U.S. and move everything overseas. But for those still clinging to the comforts of home or chasing a hot U.S. stock market, there's no better time to sprinkle some money abroad.