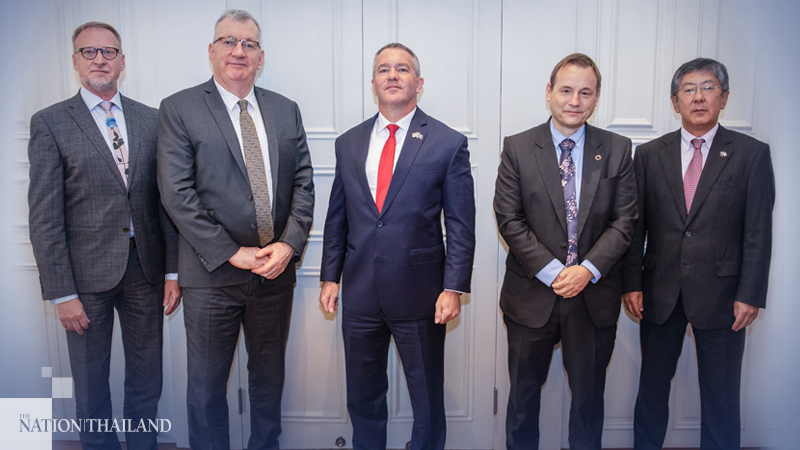 US Ambassador Michael George DeSombre and his counterparts from Australia, Britain, Germany and Japan have urged the Thai government to ease business restrictions in Thailand in order to attract more foreign direct investment in the post-Covid era. 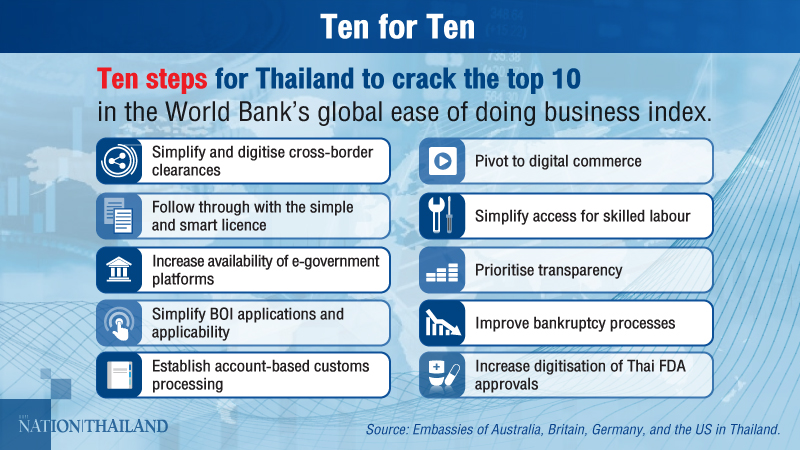 The five foreign missions proposed 10 steps for Thailand to crack the top 10 in the World Bank’s global ease of doing business index.

The proposals are the outcome of consultation with Chambers of Commerce of four countries – Australia, Germany, Britain and the US – under the Foreign Chambers Alliance (FCA), DeSombre told press at his Bangkok residence on Friday.

Among the 10 proposals is a call for Thailand to open up to foreign skilled labour.

While the Board of Investment (BOI) and Eastern Economic Corridor (EEC) policy committee have offered incentives for foreign investors to bring in skilled workers, foreign businesses want a wider easing.

“We strongly encourage Thailand to open up to foreign skilled labour in general, not just through various exceptions or otherwise for the benefit of Thai people,” said DeSombre.

Thailand should make it easier for advanced manufacturing firms to establish plants here, he said. The country should not be afraid of opening up the labour market since foreign skilled workers would help train the next generation of Thai workers, he added. Thirty years ago, Dow Chemical and Siam Cement Group launched one of Thailand’s first petrochemical joint ventures with over 30 per cent of foreign workers, who helped to train Thai workers, said DeSombre. Today the same joint venture employs just one foreigner in a workforce of 1,000 people, he said, adding that a similar pattern could be seen at Ford Motor’s project in the EEC.

Meanwhile Japanese Ambassador Kazuya Nashida urged the Thai government to lift the 14-day quarantine requirement for short visits by investors from Japan. Foreign business travellers just wanted to visit Thai factories, not go shopping or to public places, and did not have more than two weeks to spare, he said.

He also called on Thailand to join the Comprehensive and Progressive Agreement for Trans-Pacific Partnership (CPTPP).

Vietnam has an advantage over Thailand as it has already joined the CPTPP, and has other free trade agreements with the European Union and US, he said.

Germany’s Ambassador Georg Schmidt said German investors in Thailand were complaining about too much paperwork for customs clearances, tax refunds, invoices and renewal of licences and visas. Each investor has to sign about 100 such documents per week, said Schmidt.

He also praised Thailand for its digitisation efforts but called for faster development of electronic payment systems to ease business transactions. Several such initiatives are being trialled by Thai authorities.

A pivot to digital commerce is among the FCA’s 10 steps for Thailand to reach the top 10 in the ease of doing business index.

Thailand has made impressive gains in the World Bank’s Ease of Doing Business index, moving from 46th to 26th to 21st in recent years.

“By implementing the 10 measures the FCA proposes, we predict Thailand could quickly move into the top 10 of the World Bank index,” said the statement issued by the ambassadors.