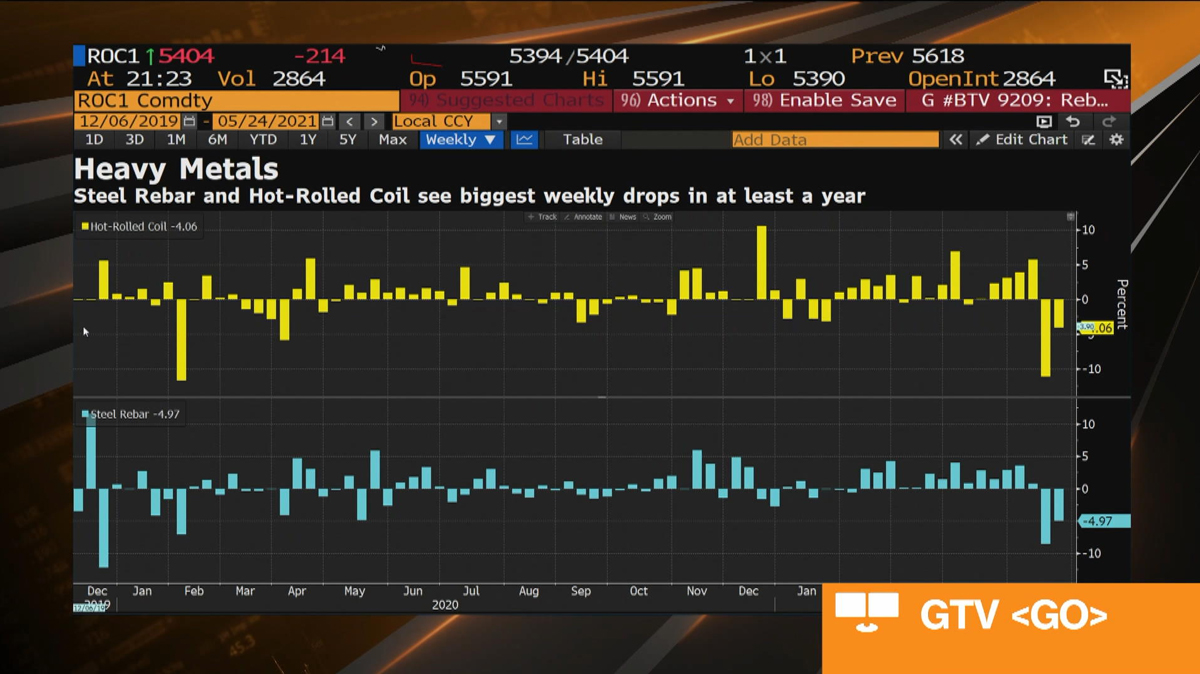 China stepped up its fight against soaring commodities prices, summoning top executives to a meeting that threatened severe punishment for violations ranging from excessive speculation to spreading fake news.

The government will show "zero tolerance" for monopoly behavior and hoarding, the National Development and Reform Commission said after leaders of top metals producers were called to a meeting in Beijing with multiple government departments on Sunday.

The push to rein in surging metals prices rippled across markets -- with steel dropping as much as 6% and iron ore tumbling by close to the daily limit -- before prices steadied later in the session. Most base metals were also under pressure.

"With policy risk shifting toward government intervention, prices will surely be affected by market sentiment," said Li Ye, an analyst at Shenyin Wanguo Futures in Shanghai. "The rapid surge in commodity prices has badly affected manufacturers and market orders, leading to losses and defaults."

There's been a steady drumbeat of government warnings about the consequences of commodity prices that are near the highest level in almost a decade. But aside from changes to trading rules at futures exchanges, there hasn't been a lot of action. Beijing is likely to face a "potential exhaustion of policy options" to restrain the rally, Citigroup said in a note.

The warning from the NDRC comes as a broad surge in commodities prices fuels fears that faster inflation could dent economic growth in China and beyond. Investors have been piling into industrial metals on bets that the world will rebound strongly from the pandemic, but concerns about the knock-on impact on demand are rising as manufacturers are forced to raise the cost of finished goods.

"It might not be great for the speculative community, but it's good news for the world in general," Amelia Xiao Fu, head of global commodities strategy at BOCI Global Commodities said by phone from London. "I think prices could become calmer, and the room for excessive rallies may be limited."

In targeting commodity prices, authorities are fighting trends over which they have only partial control as the world economy reboots with supply chains stretched. The government is also tackling the consequences of its own efforts to reduce greenhouse gas emissions, which have contributed to price gains.

The NDRC's statement is the toughest comment yet from the government, which started warning about higher raw-materials prices in April. The officials from the iron ore, steel, copper and aluminum firms that met with five state agencies in Beijing on Sunday were told excessive speculation and rising international prices were to blame for recent advances.

Key enterprises should "actively fulfill their social responsibilities" and take the lead in maintaining market order, the NDRC said in a statement. "Do not collude with each other to manipulate the prices, fabricate and disseminate price increase information, and do not hoard and drive up prices."

There's been an unusual amount of attention from policy makers on commodities in recent weeks. China's factory-gate prices rose at the fastest pace in more than three years in April, sparking concerns that costlier raw materials could hamper the economic recovery or feed into higher consumer prices.

The deputy governor of the People's Bank of China pledged a "basically stable" yuan in a statement on Sunday, right after another central bank official said the currency should appreciate to offset the rising cost of commodity imports. The comments from the official were later deleted.

That Beijing is also dealing with a problem partly of its own making is most evident in steel, where prices spiked to records after the government set targets on output curbs and ordered production to fall this year. Instead, output surged to record levels in April.