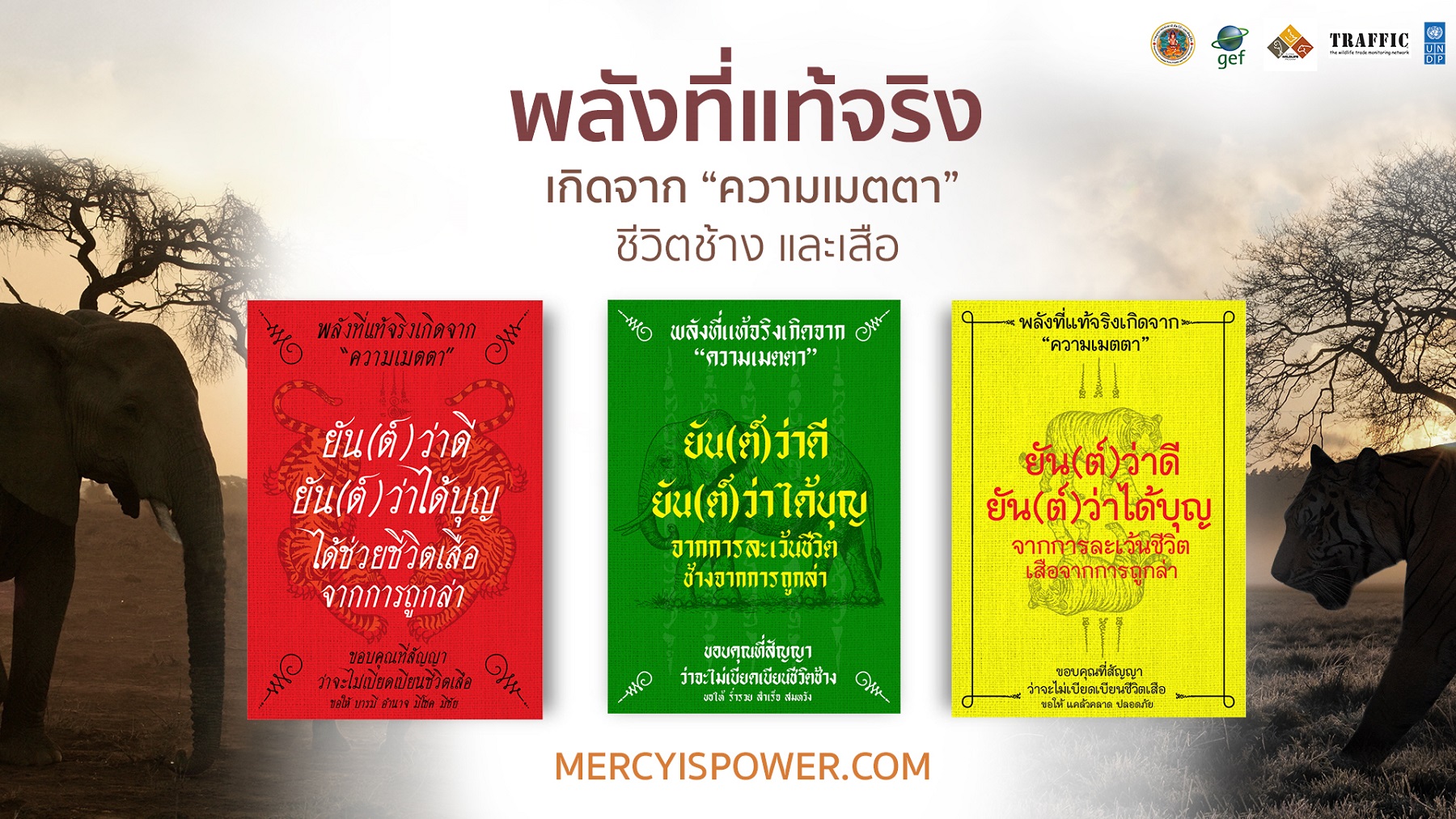 Bangkok, 23 July 2021 – Demand for elephant ivory and tiger products is a significant driver of the illegal wildlife trade, but a new campaign is encouraging Thais to join celebrities and social influencers like Cherry-Khemupsorn and Wannasingh Prasertkul in a bid to prevent further detriment to these species.

‘Mercy is Power’ is a joint campaign between TRAFFIC, the Department of National Parks, Wildlife and Plant Conservation (DNP) and the United Nations Development Programme (UNDP) with support from the Global Environment Facility.
⁠
The campaign challenges the widely held belief in Thailand that buying or possessing an elephant ivory or tiger amulet can make life better. As per Buddhist teachings, success and progress in life are from one’s own hard work and strong will. Real power comes not from possessing products that require the killing of animals but by showing them mercy and not buying animal products. People can make a pledge on www.mercyispower.com against buying and owning ivory and tiger amulets and receive a personalised e-yantra in return.
⁠
“Our mission is to conserve, promote and restore forest resources, wildlife and plant species in forest areas for conservation. I believe the campaign will succeed in getting people to rethink and change their attitudes and behaviours towards the use of ivory and tiger amulets. This directly contributes to our effort to combat illegal wildlife trade,” said Thanya Netithammakun, Director General of the DNP.
It is illegal to possess ivory unless products were registered to the owners in 2015 or before. Anyone in ownership of unregistered ivory and tiger products after this period is considered illegal based on the new Wildlife Preservation and Protection Act (WARPA) of 2019. This replaced a former WARPA and increased penalties, both in imprisonment and fine.
⁠
Dararat Weerapong, Senior Project Manager at TRAFFIC said: “The best approach to achieving long-term impact is to reduce demand for wildlife products and do it creatively, alongside law enforcement. This campaign incorporates social power and storytelling to question whether buying or owning tiger parts and elephant ivory that come from killing animals can create good luck, success and power. With the launch of the campaign, we are thrilled with the strong support from monks, leading Thai celebrities, social media influencers and our partners – together we can achieve success.”
⁠
TRAFFIC's analysis of 32 countries and territories found 369 tigers were seized from 49 incidents in Thailand between 2000 and 2018. A further 24 tigers were seized in six incidents in the country up until 2020. TRAFFIC monitored the ivory trade online in 2019 and found that more than 1,000 ivory items were found for sale online in Thailand over just five days in the snapshot survey.
⁠
“Social norms around wildlife products are evolving. More people are beginning to understand that buying or owning these products has a direct negative impact on wildlife conservation and see it as increasingly socially unacceptable. Demand reduction efforts can help end illegal wildlife trade and thereby conserve endangered species. By launching the ‘Mercy is Power’ campaign together with TRAFFIC and the DNP, we can reinforce this positive trend and hopefully end illegal wildlife trade for good”, said Renaud Meyer, UNDP Resident Representative to Thailand.
⁠
Three videos will be distributed via YouTube and Facebook, including a thought-provoking quote from Venerable Napan Santibhaddo, an Assistant Abbot at Wat Saket. The videos will prompt the audience to pledge not to buy or own tiger parts and elephant ivory and to customize and downloadtheir own e-yantra from the campaign’s official website, www.mercyispower.com, along with the hashtags #MercyisPower.
⁠
More than 20 Thai celebrities and social media influencers such as Cherry-Khemupsorn, Patricia Good, Top-Pipat, Noon-Siraphun, Wannasingh Prasertkul and Maria Poonlertlarp have shown their support for the campaign, which will start ahead of World Tiger Day on 29 July 2021.
⁠
Pledge your support for the ‘Mercy is Power’ campaign today on www.mercyispower.com.