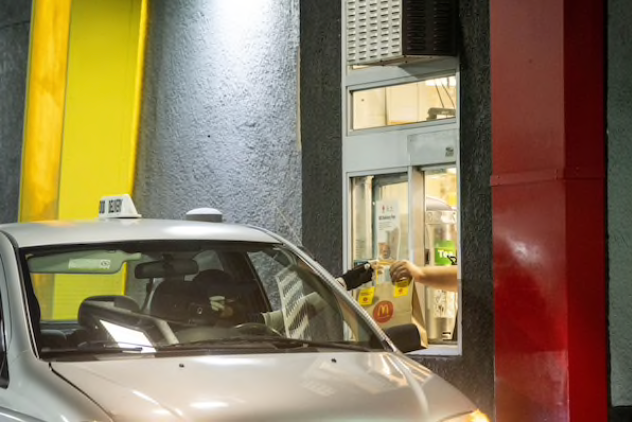 A customer wearing a protective mask receives an order from a worker at the drive-thru of a McDonald's in Los Angeles on April 27, 2020. MUST CREDIT: Bloomberg photo by Kyle Grillot.

In the fast food business, every second counts -- especially during a pandemic.

The average time to get an order at 10 of the biggest fast-food chains in the U.S. this year is just shy of six minutes, according to a report from market researcher SeeLevel HX. That's about 30 seconds slower than last year, and it shows how the pandemic has sent consumers that would normally eat in the restaurant to drive thrus, putting them to the test.

Such a small delay may seem trivial, but it cost the industry millions in lost revenue, according to the report. The slowdown broadly stemmed from the fact that many restaurants were operating with newly hired staff after a rash of Covid-related layoffs, coupled with higher volumes and a surge of delivery orders, SeeLevel HX CEO Lisa van Kesteren said.

"Covid came along and restaurants found their teams just smashed to smithereens," van Kesteren in an interview. "Because everything went off-premise, they were inundated."

SeeLevel HX estimates the 30-second delay costs a chain that serves food throughout the day about $32,000 per store over the course of a year. For a store with 2,000 locations, or about the size of Chick-Fil-A, that would add up to $64 million in lost revenue.

KFC, owned by Yum! Brands Inc., has the fastest drive-thru service, with the average order time under five minutes. It was one of only three restaurants to get faster this year from 2019. Chick-Fil-A held its position at the bottom of the list in terms of speed, and Dunkin' fell from first place to seventh. Chick-Fil-A scored highest for order accuracy and customer service, however.