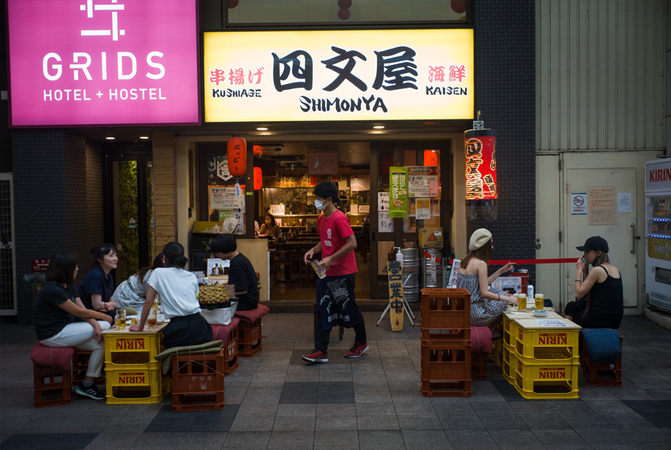 Cans of Kirin Ichiban beer on the production line in a Toride facotry. , Bloomberg

Japanese brewers suffering from the dropoff in bar and restaurant traffic are about to get some relief, thanks to long-awaited revisions to the liquor tax system that kicks in this week.

Until now, the island nation has had a complex taxation system for beer based on malt content instead of alcohol, where beer with more malt is taxed and priced higher. As of Thursday, the government is starting to bring taxes of different varieties of alcoholic products more in line with each other, which should make some beers more affordable for consumers.

The changes come at a dire time for Japan's beermakers including Asahi and Kirin. The coronavirus pandemic has wiped out a sizable source of revenue for the brewers and their global rivals as people spend less time eating and drinking out. Almost half of Asahi's best-selling Super Dry was sold through commercial channels to restaurants, where it does not have to compete with lower-malt or "new genre" beers.

As more people bought beer and alcohol to consume at home, beer sales in Japan fell by 26% by volume for the first half of the year, while new-genre beer products - which are priced lower - increased 6%, according to data compiled by Kirin.

In recent years, Asahi, Kirin and Japan's largest beermakers have put out a slew of cheaper low-malt beers or new-genre beers with no malt, which are taxed lower. Consumers have flocked to them, shifting drinking habits perhaps more than even the brewers expected.

For the first half of the year, revenue at Asahi and Kirin both fell, dragged down by the beer and alcoholic beverages division, which is usually their most profitable; sales in the domestic alcoholic segment fell 13% and 6%, respectively.

"This odd tax system created a type of beer deflation," said Nomura Securities analyst Satoshi Fujiwara. Now, it might be too late to get consumers used to cheap drinking to change their mindset, he added.

Now, taxes on high-malt beer will be lowered by 7 yen, a cut that Asahi and Kirin said they intend to pass on to consumers. Although restaurants and retailers get the final say on pricing, it's likely that they will fall into line.

Still, beer will continue to be more expensive than lower-malt beers, which are taxed as "happoshu," or bubbly spirits - the same as canned mixed drinks. Taxes on new-genre beers will go up by 9.8 yen. Eventually, the taxation will adopt a single tax for three types of beer in 2026.

The question is whether that will be enough to lure customers back to beer. The pandemic has also made people more aware of cheaper alternatives. At the peak of curtailed business and retail activity in Japan, sales of canned ready-to-drink chuhai - drinks mixed with liquor and priced lower than beer - soared.

"For beer sales to regain ground they need commercial sales to return," said Tomonobu Tsunoyama, an analyst at Mitsubishi UFJ Morgan Stanley Securities. "For that, ending the coronavirus is much more important."

In the medium term, it's more likely that lower-malt or canned mixed drinks will benefit the most from the tax changes while consumers stick to drinking on the cheap, according to analysts. That could be beneficial for the likes of Kirin, whose Hon Kirin drink, which was developed as a new-genre beer, has turned into a massive success - with sales increasing by as much as 40% some months this year, and helping it take market share in Japan's highly competitive beer market from rival Asahi.