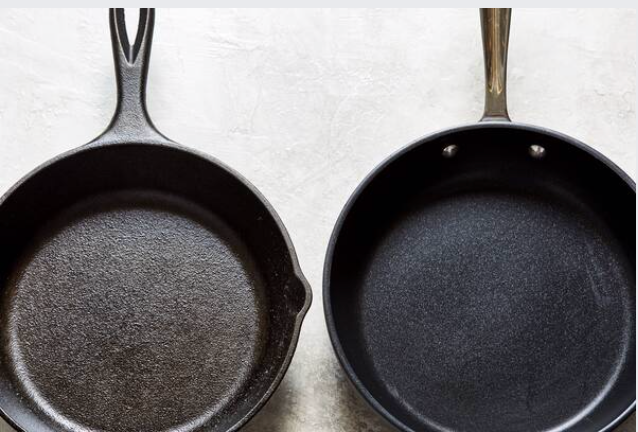 The debate between cast-iron haters and loyalists is as enduring as the pan itself. MUST CREDIT: Photo by Stacy Zarin Goldberg for The Washington Post.

Cast-iron pans have a storied place in American home cooking. The hefty, glossy black workhorses have plenty of attributes: they hold heat like champs, can put a crusty sear on a steak, and they look gorgeous hanging from a rack. Their fans are legion.

And so, inevitably, when someone expresses anything other than reverence for the durable cookware, the oven mitts come off, and Team Cast Iron (some of whom self-identify as "Skilletheads") is spoiling for a fight.

This week saw the latest flare-up in the long-simmering debate between those who love the stuff and those who find them too fiddly, too high maintenance, or just too heavy.

Rosie Gray, a reporter for BuzzFeed News this week tweeted what one might have thought was an innocent musing. "I've never seen anyone make a convincing argument for why i should have a cast iron pan," she wrote.

The missive drew nearly 2,000 responses, most in defense of the sacred cookware, including a small number of nasty responses. In an interview, Gray called her ensuing mentions "out of control" - and this is from a female reporter who has covered the Trump administration.

Gray says the heft of the cookware is simply unappealing, and so is the idea of doing a separate cleaning regime than she uses for her other pans. "People were like, it's easy to just rub it with salt, or oil it, and I'm thinking, 'or I could cook in a pan that I don't have to do that to?'" she says. "I just might not be one of the people who has patience to do that."

She isn't the first cast-iron heretic to draw public note. This summer, New York chef Frank Prisinzano made headlines for his blistering put-down of cast iron. "We're way past cast-iron now," he said on Instagram, blasting the pans for being heavy, and time-consuming to clean and season. "This is really something from history here."

But when you ask cast-iron partisans about the skeptics, a funny thing happens. Most don't sling insults. Will Copenhaver, vice president for marketing and sales for the Charleston-based Smithey Ironware Co., strikes a genteel (yet unmistakably shade-filled) note when asked about those on the other side of the aisle.

Perhaps they're just "contrarians," suggests Copenhaver, whose company produces swoon-inducing, artisanal pans. Or it's just a matter of taste, he says, with the unspoken suggestion that the haters . . . well, as Southerners say about people with bad taste, bless their hearts. "Some people don't like old houses," he says. "Some people do. People who haven't been exposed to cast iron might think it's a pure nostalgia play, which is not fair."

Copenhaver allows that some people might find it annoying not to be able to put their pans in the dishwasher. But beyond that, he thinks that people who don't like cast iron probably just think it's harder to maintain than it really is.

Ashley Jones, author of the cookbook "Modern Cast Iron," has a similar read on the doubters, and chalks up their negative takes to what she says is information overload - after all, many cast-iron devotees insist that they alone know the best way to care for their pans, whether that's a salt-scrub method or using chain-mail "sponges" to clean them. "There's a lot of confusion," Jones says. "If you look up how to care for cast iron, there's a lot of conflicting information, you'll see a million different answers." "It's an old debate, and I don't blame people for either side of it."

Jones offers a simple technique for everyday cleaning that she hopes could win over the fearful. Go ahead and use soap, she says. (Today's mild detergents aren't your grandmom's harsh lyes, and won't strip the seasoning.) Dry the pan well on a warm burner, add a bit of oil, and give it a quick wipe with a paper towel.

Plenty of people similarly sought to educate Gray about cast iron in the hopes of converting her, sharing their own tips and techniques for maintaining it. But she's still not planning to buy a new pan.

"Look, we should all use the kitchen tools that we like, and for me, the benefits don't outweigh the negatives," she says. "But I applaud the effort people put into convincing me."

Don't expect the faithful to give up trying. One of the biggest selling points for cast-iron pans is that they last forever. The debate over them will, too.