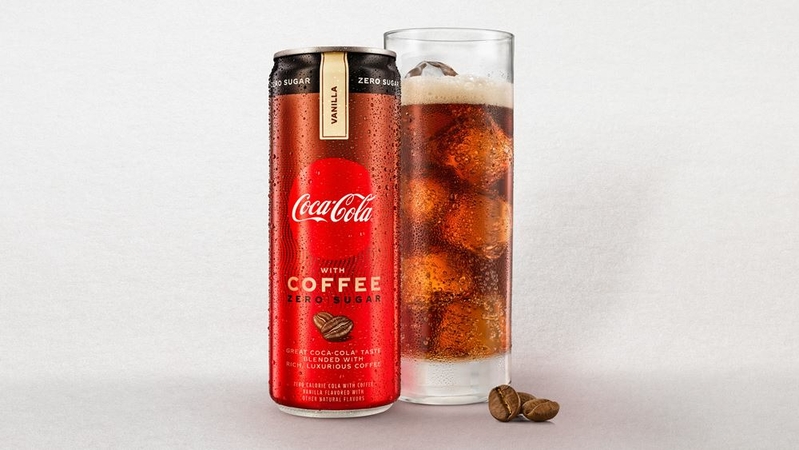 America has gone can crazy. We're drinking so much out of the spherical aluminum tubes that there's a nationwide shortage of them. And it's not just soda we're guzzling, but just about anything in liquid form, including (nonalcoholic) craft beer, premixed cocktails, hard seltzers, fizzy juices, sparkling water, kombucha, iced tea and cold coffees.

The latter category has taken off in a big way over the last few years: In 2019, my colleague Maura Judkis declared it was a "golden age" for the product, with everyone from Maxwell House to indie, third-wave coffeehouses churning out cans of brews laced with coconut cream, antioxidants and maple water. And now the trend is official, with Coca-Cola - the undisputed world champion of beverage sales - debuting its own version. The drink comes in three flavors - dark blend, vanilla and caramel, along with sugar-free Coke Zero versions of the dark blend and vanilla - and will appear on grocery shelves this week.

The beverage giant might be fashionably late to the canned-coffee party, and its entrance might feel a bit like when your mom finally bought her first pair of skinny-leg jeans sometime around 2010. But Brandan Strickland, the brand director for Coca-Cola, says the launch timing, after two years of development, is intentional, and that the resulting product will stand out in a crowded field. "We wanted to do it in a way that was true to Coca-Cola," he says of the drink's creation. "This is unlike any other option out here in the marketplace."

As opposed to other canned coffees, the Coke-coffee hybrid is just that. It's not Coke's version of canned coffee, it's actually a mash-up that combines the familiar flavor of the soda you've tasted a thousand times and that of your morning coffee. Strickland said that to capture the paired flavors, the company made an advertising tagline from something said by a taster in a focus group: "Sips like a Coke, finishes like a coffee."

"We found that was a compelling message," he says. "And it came directly from consumers."

Upon tasting a sample, I'm inclined to vouch for the slogan. For the first millisecond or so after raising the dark blend can to your lips, you'd think you were drinking a regular soda, with its recognizable caramel notes and almost-stinging effervescence hitting your palate. The taste of coffee kicks in at the back end, offering a dry, powdery jolt that brings to mind a bracing cup of joe at a diner.

"It tastes like a Coke - until it doesn't," my husband observed after a few sips.

One quibble is the slight-but-lingering sensation of fake sugar that made my tongue curl after a bit, which I found confusing. This was supposed to be the regular version, right? A close reading of the ingredient list confirmed my suspicions: In addition to the high-fructose corn syrup that sweetens regular Coke, the Coke-and-coffee concoction also contains sucralose. (As a fake-sugar-phobe, I found the no-calorie vanilla version mouth-shrivelingly undrinkable, though I know it might appeal to the legions of diet soda drinkers out there.)

More refreshing than the drink itself might be its straightforward name, "Coca-Cola with Coffee," a moniker devoid of any cutesy flourishes that smack of a marketing department with too many former English majors on board. (See: Coke's AHA line.) I like that it lives up to its promise. It's Coke! With coffee! This is all very easy to understand.

Less clear is exactly when one should drink this. Is it meant to replace my morning cup of coffee? (Fat chance, Mr. Polar Bear.) Or are we supposed to crave it alongside a burger and fries? (Which could be . . . weird.)

Strickland offers the idea that it's something people will reach for in the dreaded "3 o'clock slump," that moment in the afternoon, he says, when consumers might debate whether they want a Coke or a coffee. The pick-me-up factor is real; a 12-ounce can contains 69 mg of caffeine, twice that of regular Coke, though still far lower than the 130 mg a similarly size cup of Starbucks offers.

Coca-Cola began working on the new drink well before 2020, but it seems like a beverage tailor-made for our pandemic selves. These days, we're deprived of barista-poured brews, forever stuck at something-o'clock, badly in need of a jolt and simultaneously craving something both familiar and new. With so many decisions to make - what to binge next on Netflix? Can I wear these sweatpants another day? - at least there's one less to get stuck on.