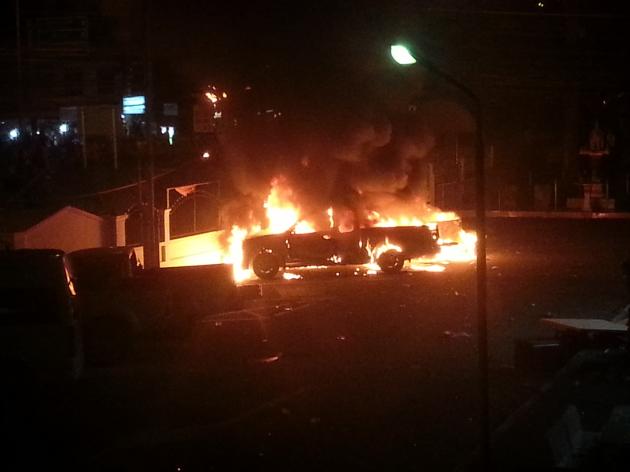 AS MANY as 17 policemen who were injured during a Phuket riot last weekend have come forward to lodge complaints against suspected rioters.

National police chief Pol General Chakthip Chaijinda yesterday said people and businesses affected by the riot, which raged on from Saturday night to early Sunday in Phuket’s Thalang district, could also come forward.
“Airlines and people living in the area, for example, may file complaints if they have suffered adverse impacts,” he said.
Hundreds of people went on a rampage in front of the Thalang Police Station after the deaths of two young drug suspects who were fatally injured in a road accident during a police chase.
During the riot, some angry demonstrators attacked policemen. They also set fire to vehicles parked at the police station and hurled rocks at the building, causing property damage.
Some sources said that as many rioters had also blocked local roads, some people missed their flights and an ambulance faced difficulty taking an emergency patient to a hospital.
Phuket police chief Pol Maj-General Patchara Boonyasit yesterday said 10 vehicles were damaged during the riot. He said two of them were state property, while the rest belonged to policemen.
“Vehicle damages are estimated at about Bt5 million. The police-station building also sustained damages of about Bt1.4 million,” he said.
He said police were urgently gathering evidence to back the issuance of arrest warrants for at least nine key instigators of the riot.
Some of these suspects have left Phuket in the wake of the riot, apparently for fear of being prosecuted.
“But such offences have a statute of limitations of at least 10 years. We can track them down later,” he said.