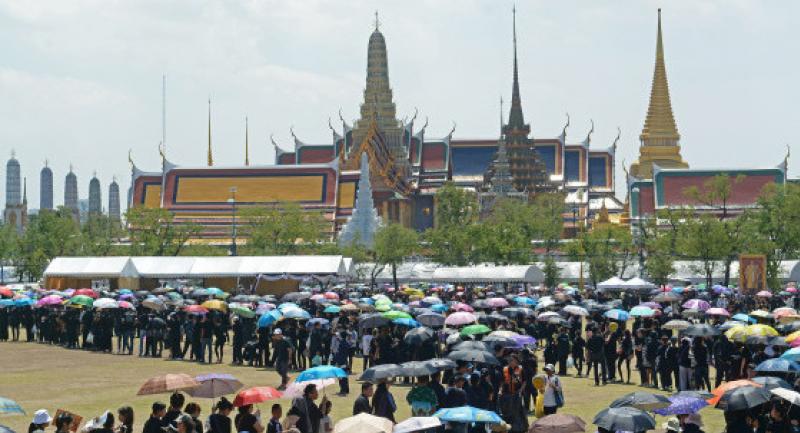 MOURNERS from across the country will have the opportunity to pay obeisance before the Royal Urn of His Majesty the King starting Friday.
The Interior Ministry is preparing to facilitate trips to Bangkok for people from all 77 provinces who want to pay tribute to His Majesty in the Dusit Maha Prasat Throne Hall of the Grand Palace.
Authorities are bracing for a huge influx of mourners beginning Friday. The Royal Household Bureau will allow 40,000 people to pay their respects to the King in the Throne Hall.
Access to the Royal Urn will be opened to the public for the first time on Friday.
Each day about 3,000 mourners from five provinces will have the opportunity to travel to Bangkok under arrangements made by local ministry officials and be granted permission to enter the Throne Hall to pay their respects to the Royal Urn.
An estimated 255,000 are expected to come from across the country under this arrangement to pay their last respects to the King from Friday until January 20, 2017.
Until Thursday, people can bid farewell to the late monarch in front of his portrait and sign the condolence book at the Sala Sahathai Samakom Hall inside the Grand Palace. The following day, people can pray in front of the Royal Urn from 9am-4pm.
Krisada Boonraj, permanent secretary of the Interior Ministry, said in a letter to local officials yesterday there would be a daily quota for people in all provinces to enter the Throne Hall.
Provincial mourners have been pouring into Bangkok to pay tribute to His Majesty, with the Bangkok Metropolitan Administration providing free lodging for up to 600 people per night at the Thai-Japanese Sports Stadium in Din Daeng.
City Hall said free lodging has also been available at the Keela Wej 1 Building since October 14. More than 100 people registered to stay overnight last Saturday. The facility will be open for the first 100 days of mourning.
The number of Thais flocking to the Grand Palace to mourn the passing of His Majesty surged over the long weekend to 50,000 yesterday, while more provincial mourners are expected to arrive in the capital in coming days.
Nattawit Nao-saeng, an official responsible for distributing tickets to those wanting to enter the Grand Palace to pay respects in front of the King’s portrait, said people had started to queue for the tickets after midnight on Saturday. The first batch of 20,000 free tickets ran out by mid-morning yesterday.
The second batch of 30,000 tickets was handed out and there were no more left by 2pm. People were advised to drink plenty of water to avoid heat stroke from the hot weather.
With the ticket system in place, the procession of people entering the Grand Palace has been better organised, but the line is long and stretched more than two kilometres from Sanam Luang to Silapakorn University.
Security has been tightened around the whole area, while a large section of Rajdamnoen Avenue – from Sanam Luang to Democracy Monument – has been closed to motorists, allowing large crowds to walk conveniently to Sanam Luang and the Grand Palace.
Social Development and Human Security Minister Adul Saengsingkaew presented a trophy to Parn Muengyote, 84, a disabled Buri Ram province resident, who managed to travel by tricycle from his hometown in the Northeast to Bangkok to pay tribute to His Majesty. Another trophy was bestowed on Oad Peumchai, 84, who was also disabled, but rode a bicycle from Nakhon Ratchasima to Bangkok to join the memorial service.