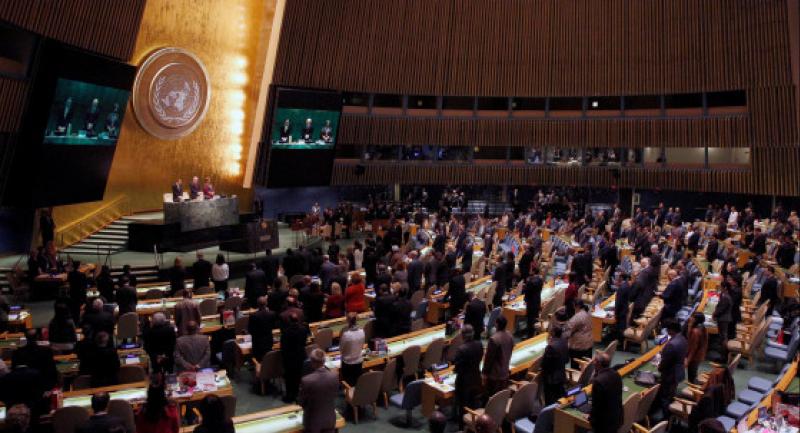 THE international community hailed His Majesty King Bhumibol Adulyadej during the 71st Session of the United Nations General Assembly for his utmost dedication throughout his seven-decade reign.

Representatives of the UN and six regional groups paid tributes to the much-loved monarch, during Friday’s session held at the UN headquarters in New York.
After observing a minute’s silence, speakers were unanimous in praising the King’s role in uniting Thailand through the Kingdom’s ups and downs as well as his determination to ensure sustainable development through the implementation of his sufficiency economy philosophy.
UN Secretary-General Ban Ki-moon expressed admiration for the “visionary and humanitarian” King’s dedication to improve the lot of Thailand and its people, particularly the most vulnerable sections of society.
“King Bhumibol’s commitment to sustainable development and national resilience helped move the country through its various development phases and towards becoming a vibrant economy,” he said. Ban had paid a courtesy call on HM the King during his visit to the Kingdom in 2007.
President of the UN General Assembly Peter Thompson recalled the late King’s iconic phrase on his Coronation day: “We shall reign with righteousness for the benefits and happiness of the Siamese people” – as a commitment for which he worked tirelessly throughout his life.
Calling the late King one of the most venerated global leaders, Thompson praised the monarch for being a strong supporter of the multilateral system, as a force for peace and unity, and also a committed environmentalist.
His dedication to soil science and conservation was recognised by the UN General Assembly and it designated December 5 – the King’s birthday –as World Soil Day and the International Year of Soils, Thompson noted.
The US permanent representative to the UN, Samantha Power, pointed how the late King managed to touch the needs of all Thai people not only through his years of travelling across the Kingdom but also via his scientific innovations that gained nearly 40 patents and trademarks.
Speaking on behalf of the UN host country, Power cited as an example the King’s innovation nicknamed “monkey’s cheeks” to address the problem of perennial floods, inspired by how monkeys would store chewed bananas in their cheeks so they could eat them later.
“[So he] built a system of small reservoirs that worked using a similar principle – storing excess water during heavy rains that could be used later for irrigation,” Power said. “The system of ‘monkey’s cheeks’ is still being used across Thailand today.”
She also recalled the King’s visit to the US in 1960 on the invitation of then-president Dwight Eisenhower and he also addressed a joint session of the US Congress on the bilateral friendship. “The King was [also] speaking about the bonds and generosity among members of Thai families,” she said “And His Majesty considered all the people of Thailand to be his family,”
The US is also the birthplace of the late monarch, who started his life at Cambridge, Massachusetts, where a square bearing his name in Harvard University brings Thai people paying him homage.
Among those paying tributes were permanent representatives speaking on behalf of Groups of Eastern European States, Western European and Other States, Latin American and Caribbean States, African States, and Asia-Pacific States.
“His ingenuity led to a wide range of more than 4,000 royal initiative projects, from farm irrigation to flood alleviation and public health to distant services,” said Abdallah Wafy, permanent representative of Niger to the UN.
“His Majesty was an embodiment of post-war generations with its hopes and dreams in global peace development and universal human rights,” said Matthew Rycroft, permanent representative of the United Kingdom to the UN.
“He also led development programmes to respond to the country and was a keen supporter to advance agriculture and sustainable development.”
The session ended with Thailand’s permanent representative to the UN, Virachai Plasai, emphasising the late King’s vision of people-centred development that helped transform the then underdeveloped country into an upper-middle income country.
Virachai also recalled HM the King’s pioneering work in crop substitution, aiming to get rid of opium plantations, which won praise from the UN Office on Drugs and Crime as an effective means to eradicate illicit drugs.
HM the King also gained numerous recognitions from the UN – the Agricola Medal from the Food and Agriculture Organisation in 1995; the Global Leaders Award from the World Intellectual Property Organisation in 2009, and also the first recipient of the UN Human Development Lifetime Achievement Award in 2006 – the Thai diplomat added.