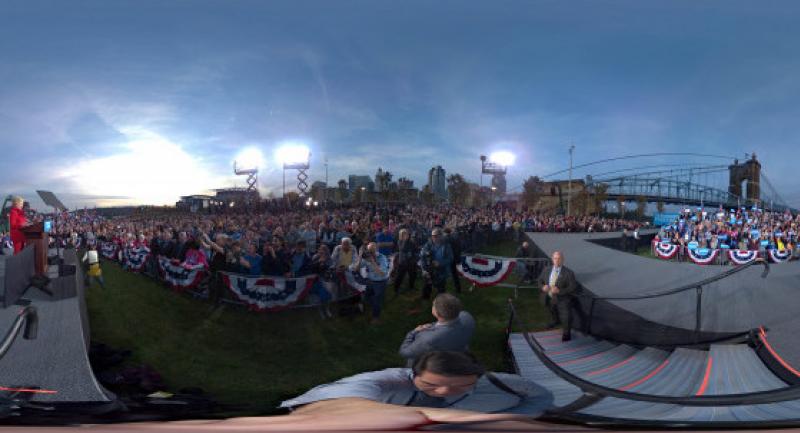 Clinton, Trump hopscotch swing states with one week to go

CINCINNATI - With one week to go until Election Day, Hillary Clinton and Donald Trump were barnstorming battleground states Tuesday, as the Democratic nominee tried to pivot away from attacks on her protection of US secrets.

Eager to turn divert the conversation from a renewed FBI inquiry into her use of a private email server while secretary of state, Clinton on Monday warned against her White House rival being allowed control of US nuclear launch codes.
With no sign anything concrete will come of the FBI probe before polling day, Clinton believes she can face down the challenge and return to the issue of Trump's fitness to lead.
Both candidates were keeping up a manic campaign schedule targeting key swing states.
Trump was scheduled to speak in Pennsylvania and Wisconsin on Tuesday, while Clinton was hopscotching across must-win Florida.
Democratic surrogates including President Barack Obama, Vice President Joe Biden, husband and former president Bill Clinton, running mate Tim Kaine and primary opponent Bernie Sanders were fanning out across battleground states to stump for votes.
Clinton, pointing to Trump's numerous angry blowups on the trail and often confused responses to questions on security issues, painted her Republican rival as a dangerous hothead who could trigger Armageddon.
"Imagine him in the Oval Office facing a real crisis," the 69-year-old Democrat said of Trump, a 70-year-old New York property mogul turned reality television star.
"Imagine him plunging us into a war because somebody got under his very thin skin. I hope you'll think about that when you cast your vote."

Clinton issued an ad recalling the renowned 1964 "Daisy Girl" television spot that then president Lyndon Johnson used to paint his challenger Barry Goldwater as a danger to all human life.
Trump meanwhile has done nothing to moderate his own rhetoric, storming through a series of usually Democratic states in an effort to break Clinton's apparent lock on the electoral college.
His attacks on Clinton's private email server -- which he alleges put US secrets at risk -- are aimed at shifting momentum in a race where she was increasingly seen as the prohibitive favorite.
But the first major poll to have been partly conducted after Friday's bombshell news that the FBI has relaunched its email probe showed little movement in Trump's direction with one week to go.
The NBC News/SurveyMonkey weekly poll showed Clinton's six per centage point national lead essentially unchanged since last week.
Allegations Clinton put America at risk by using a private server were thrust back into the spotlight when FBI Director James Comey said the bureau would study a newly uncovered batch of emails to see if they are "pertinent."
Clinton and her supporters were furious that Comey made his announcement without providing any new evidence of wrongdoing but, after three days of rage, Clinton took a more emollient tone Monday.
"I made a mistake. I'm not making any excuses," she said, inviting the FBI to pursue its probe and suggesting that the agency would find, as it had in July, that she has no case to answer.
"It wasn't even a close call," she said. "I think most people have moved on. They're looking and focused on 'OK, who is going to be the next president and the commander-in-chief?'"

True to form, Trump wasn't letting go, adding the threat of constitutional crisis to his oft-stated claim that Clinton's email use was criminal in intent and the worst scandal since Watergate.
A Clinton victory, he warned supporters, "would mire our government and our country in a constitutional crisis that we cannot afford."
He predicted "a criminal trial for a sitting president," and chastised Clinton for seeking to blame others for a scandal that has lasted for 20 months: "She has brought all of this on herself."
University of Virginia politics professor Larry Sabato said the FBI development has changed the race's dynamics, even if Clinton's polling data has not taken an immediate hit.
"She would have been running a victory lap this week, running up the score," he told AFP. "Instead, she's trying to hold on."
But Sabato added that Trump's strategy of touring Democratic-leaning states reflects a stark truth: he needs to flip at least one of them in order to win, and even that may not be enough.
"He is going to have to turn a blue state or two in addition to winning the battlegrounds," he said. "He has to win almost everything. If he wins all the battlegrounds, he needs one more blue state."
According to US media reports, Comey's FBI probe was renewed after agents seized a laptop used by Clinton's close aide, Huma Abedin, and her now estranged husband, Anthony Weiner.
The disgraced former congressman, who resigned in 2011 after sending explicit online messages, is under investigation over allegations he sent sexual overtures to a 15-year-old girl.
Clinton campaigned Monday for a third straight day without Abedin by her side.